The Day the Sun Died by Yan Lianke: a brave, masterful novel 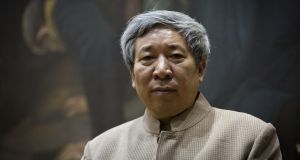 Li Niannian’s parents run the New World funerary shop in Gaotian, selling wreaths, paper ornaments and burial clothes. In short, “everything dead people might need”. They also take part in a strange trade in “corpse oil”, the oil that drains from the burning of bodies in the town crematorium. One night, young Li Niannian visits his uncle’s crematorium to collect some corpse oil, where the workers need to drink heavily to deal with the smell of the corpses and the trauma of their work, to discover a girl, Little Juanzi, who works as a cleaner. Surrounded by the darkness and stench of the crematorium, Juanzi moves “like a little butterfly fluttering around”, and hopes one day to turn her place of work into a garden, so that “when people die and are brought here, it will be as though they were returning home”.

Published originally in 2015, Yan Lianke’s latest novel The Day the Sun Died explores with a strange elegance and dark, masterful experiment these twin themes of night and death, dreams and reality. The book takes place over the course of a single night, beginning at 5pm and ending early the next morning. The novel is divided into sections, each marked by the progressions of the clock as the night goes on. On the night, residents of Gaotian suddenly start sleepwalking, or “dreamwalking”, as the translation calls it. Dreamwalking, as Li Niannian tells us, is as “a result of the way in which whatever you are thinking about during the day becomes engraved in your bones, so that after you go to sleep at night you continue your thoughts from when you were awake, and try to carry out those thoughts in your dreams”. At first, it starts with the odd dreamwalker, accidentally falling into a well, or harvesting at night, but slowly the violence increases as the world of the novel descends into a bloody chaos, until corpses are “blanketing the ground like fallen fruit”.

This is a brave and unforgettable novel, full of tragic poise and political resonance

For all its dark political energy, The Day the Sun Died – which Carlos Rojas in his introduction suggests is a critique of Chinese president Xi Jinping’s slogan of the Chinese dream – is also a poignantly self-reflexive novel, in which the protagonist visits, talks to and prays for the author. There is a character called Yan Lianke, a well-known author, whose works are quoted throughout and are permutations of the “real” Lianke’s novels. Lianke’s novel Lenin’s Kisses, for example, becomes Kissing Lenin, a book that Li Niannian reads and explores carefully in the opening pages of The Day the Sun Died, though he concludes “I didn’t like this story, nor did I like the tone with which he told it”.

The novelist being critiqued by his own protagonist is one of the many moments of Lianke’s new novel, in which he assimilates, criticises and plays with his own body of work. One needn’t have read Lianke’s previous novels to understand this, but a knowledge of his works would surely reveal subtler depths to the craftsmanship on display here.

Lianke’s struggle to write also forms an ongoing motif. As Li Niannian visits the fictional Yan Lianke through the novel, the fictional novelist’s frustration increases: he has no ideas, he has writer’s block, he cries, weeps, and can no longer think of reasons to live. There are times, too, when Li Niannian offers readings of Lianke’s novels which are laced with authorial irony, sometimes self-criticisms, sometimes touched with hope. Li Niannian tells us “his settings are typically cold and desolate, stretching endlessly in all directions. Even after walking for three days and three nights, you still would not be able to reach the end of his wilderness”. This is not a fair critique, though elsewhere Li Niannian also tells us that in Lianke’s novels “the people, soil, and houses all sing a song of everlasting sorrow”.

The Day the Sun Died is poetic, both in structure and imagery. There are some moments when the translation seems clunky, when the image feels potent but hidden behind some inelegant, perhaps overly-literal phrasing (“I can hear my hair blowing in the wind, and can even hear the sound of the individual strands of hair bumping into each other”), but the power and dark, visionary world of Lianke’s writing shines through. This is a brave and unforgettable novel, full of tragic poise and political resonance, masterfully shifting between genres and ways of storytelling, exploring the ways in which history and memory are resurrected, how dark, private desires seep or flood out.