Iain Banks: ‘In the end we’ll be smiling’ 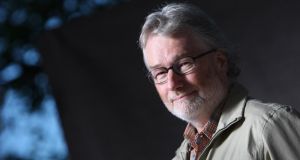 ‘I am officially very poorly,” wrote Iain Banks, the Scottish author, announcing in a blog-post he has been diagnosed with cancer and has a short time to live. He had asked his partner, Adele Hartley, to do him “the honour of becoming my widow” and he is, at the time of writing, enjoying a honeymoon in Italy.

This simple and stoical response to death shouldn’t be too surprising to fans of Banks’s writing. The best science-fiction writers are philosophers and Banks is one of the best science-fiction writers. His novels are built around a strong moral sense of how a society should conduct itself, balanced by a compassionate understanding of why it does not. They are humane to the core.

Not that you’d necessarily have thought this with the publication of The Wasp Factory in 1984. It was a huge hit, though the blackly comic adventures of its psychopathic young protagonist upset some people no end (“It’s a sick, sick world when the confidence and investment of an astute firm of publishers is justified by a work of unparalleled depravity,” wrote this newspaper’s reviewer). It was instantly added to a list of grimy cult classics regularly handed to 17-year-old book buffs everywhere. Cunningly, subsequent editions had a few pages at the start quoting the bad reviews (in the late 1980s he signed my sister-in-law’s copy with the legend “he of the bad reviews”). A lot of people read The Wasp Factory .

Soon after this Banks split in two, becoming “literary sensation” Iain Banks, author of gritty psychological novels such as The Crow Road (opening line: “It was the day my grandmother exploded”) and “science-fiction sensation” Iain M Banks, creator of galaxy-spanning space operas like Consider Phlebas and Look to Windward .

Most fans prefer one strand of his work to the other. While I like his literary novels a lot, I love his science-fiction novels - particularly those concerning intergalactic Utopian anarchists the Culture (“hippies with space weapons” is how he sometimes describes them).

These books have veered from offbeat action-adventure stories to moving considerations of mortality, immortality, the nature of consciousness and the possibility of technologically facilitated life after death (an atheist, he doesn’t really believe in an afterlife). All of these epic themes are humanised by Banks’s own warm, witty personality.


Misguided snobbery
I had the enjoyable experience of interviewing Iain M Banks last October. He was publishing a new Culture novel, The Hydrogen Sonata , so the M was significant (it stands for a family name: Menzies). He was lovely. He told me about his ice-skater mother, his “plain-clothes navy” father (a member of the admiralty), and Martha, the sister who died before he was born. He told me about a childhood spent reading Readers’ Digest from cover to cover and the never-published spy novel he wrote as a teenager (he called it The Hungarian Lift Jet ). He spoke about misguided literary snobbery and about his own exhausting writing routine. He talked about competing in Celebrity Mastermind (his specialist subject was “the distilleries of Scotland”, something he’d previously written a book about) and about the joy he got from composing a symphony on his iMac. He talked about visits from friends and about going hill walking. He talked to me for longer than he needed to talk to me and he was hilarious and generous throughout. He had no idea that he was dying.

Banks has a tremendous imagination. He has written 28 books with a 29th to be published soon (the launch date is being brought forward). He writes a book every year. He makes any writer with a more modest output feel lazy (and so they should). With Banks, it always feels like there is more to come. In his literary works he revises the world and in his science fiction books he has created a universe – in which people can upload their consciousness to machines or ascend to higher dimensions. It’s a universe in which death is optional. It’s a universe that will soon come to an end.

“I’m a short-term pessimist and a long-term optimist,” Banks told me last year. He had been bemoaning his government’s ineptitude over global warming and corporate greed and malice over intervention in the Middle East (at the time of the Iraq war he tore up his passport and sent it to Tony Blair).

He believes that humanity is intent on sabotaging itself at the moment, but that eventually we’ll get over all that to colonise the solar system. “In the end, we’ll be smiling,” he promised. And he’s the kind of person I’m inclined to believe. You should read all of his books.