I Will Be Complete review: a subtle but shocking memoir 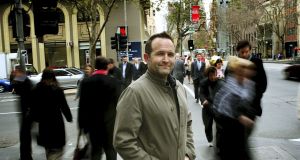 Glen David Gold: while his memoir is clear-eyed about how the sins of the parent are visited on the child, it is also generous and loving. Photograph: John Woudstra/Getty Images

Book Title:
I Will Be Complete

Storytellers are made, not born. Growing up in 1970s California, novelist Glen David Gold told and retold himself the story of each day, unable to sleep until he’d made it seem real. His childhood seemed perfect. There was money, a beautiful mother, a driven, entrepreneurial father, a new house complete with conversation pit, jacuzzi and objets d’art. But nothing was solid, and one day it all went away.

In his 20s, Gold would tell how, after his parents split, he’d “lived alone for a while when he was 12”. People’s reactions would show him how to feel. What seemed to others like calmness was in fact the space between something happening, him forming the right words and then waiting for the appropriate feelings to appear.

I Will Be Complete charts the writer’s amputated boyhood in Los Angeles to a rootless adolescence in San Francisco with his divorced mother, her every reinvention a slide down the ladder of security and self-respect. A writer or artist created by a parent’s thwarted ambition is common enough. But the creative and emotional lives of “men raised by shattered women” are seldom told in the first person, and almost never with the compassion of distance and immediacy of observation and detail seen here. The memoir is equally subtle and shocking, as clear-eyed about how the sins of the parent are visited on the child as it is generous and loving, at least as far as love can be expected to go.

What had seemed the endless summer of an affluent childhood turned out to be an anomaly, a never to be repeated period when Gold’s mother had it together. Soon after the family’s wealth turned into worthless shares, Gold’s father left to start a new family with a woman with whom he had “every section of the Wall Street Journal in common”. He was determined never to feel guilt again. Gold’s mother resumed her cycle of reinvention and shattering, her descent marked by a fragility and ruthless survival instinct that hint at profound damage.

She had grown up effectively fatherless during the war in a London boarding house, part of a family whose birth secrets and whispered tragedies resisted mere genealogy. A kidney went missing. Maybe there was abuse. She fled, first to be a GI bride, then a plucky California career girl, then a trophy wife and mother to a gifted child. She was going to be novelist. She and her son had a psychic connection. She would be the clichéd divorcée who truly found herself, then an investor or maybe a business woman. She became a conman’s mark, someone who cashed in her son’s education fund and scrounged off him, then the doting caretaker of a violent addict. I don’t think she is ever named.

Stepping gingerly around the emotional void of his mother’s denial, Gold the adolescent sets out to grow himself up. He’s not the precocious “36-year-old midget” his parents need him to be. He reads comics and books to find out how people think and feel. He cooly observes his behaviour at a punk concert to see if he’s part of the violence or simply appreciating its catharsis from nearby. He dedicates a gap year to becoming more self-aware, but spends it trying to fix the first in a series of women. One girlfriend tells him he needs to do some accounting of how his family life isn’t just a set of stories, but something he’s been affected by. All the way through, he writes: notebooks; comics; short stories and a string of unpublished novels.

Joan Didion said we write to survive. Gold’s father tells himself stories “about having landed where he belonged, and that lasted till his next divorce”. Gold’s mother didn’t think people “were what they did. Instead, they were what they told you they did”. But I Will Be Complete does more than show how our fantasies push us away from the pain of the past. He suggests that the “pathology of fiction” is how we experience and shape life itself. The writer’s tricks of temptation and evasion, foreshadowing and repetition, dangling a telling detail here and hinting at dark motivations there; all are present in the conman’s patter and the self-delusion of an adult stealing her son’s childhood so she can have another shot at her own.

I Will Be Complete touches lightly on the set pieces, bizarre incidents and bravura descriptions that readers of Gold’s bestselling novels, Carter Beats the Devil and Sunnyside, will treasure. You are right in the midst of San Francisco’s “me generation” where a parent’s claim that “people don’t belong to each other” is big news to a 10-year-old boy; in a progressive boarding school, learning that girls, too, are sexual; working at a laconically failing LA bookstore where celebrities perform their stardom as they order copies of their own books. I Will Be Complete must draw on copious journals, but it never feels over-worked or weighed down with detail. It moves sinuously through fads, fashions, and ways of speaking and being specific to moments in life and a particular time and place. Sometimes it’s downright odd. Read it and you will never listen to REM’s Cuyahoga the same way again.

In a memoir that’s doesn’t try to be oblique, but that knows the harder you look at something broken, the less sense it makes, it’s the animals that give the game away. Talking about his mother, Gold compares himself to creatures. He rejects her “like a fierce duckling”. When she phones to ask if she’s seen him or just a doppelgänger, he says he’s “not a panther, nor a chimp”. Here, only an animal can enjoy the uncomplicated love a child needs, asking no more of it than simply to be what it is. A Siamese cat called Leo, as exacting and passionate as any of that noble breed, teaches Gold to pet him just as he needs to be petted, to love him just as he demands to be loved. When Leo is jettisoned, the indifferent way the powerless boy reacts is one of the toughest, saddest moments in the book.

Gold is a writer with nothing to prove, just unanswerable questions to circle around and make us ask ourselves. He doesn’t just tell you straight that it’s impossible to unpack the moments of his mother’s shattering. He’ll come at the same incident from different angles till you squint at it sideways, hoping for a glimpse of the whole. In the last few pages, with bombshells littered about like dockyard confetti, you learn more about what happened but understand less about why, except that it had to be this way because for some, there is no escape.

Sunnyside, Gold’s marvellous picaresque about Charlie Chaplin and the impossible vagaries of fate, riffs on the line “call no man lucky until he is dead”. Here, the book writes the life back into something real. You cannot read it and remain unchanged.