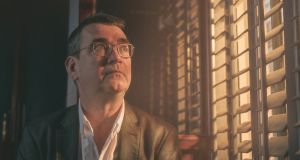 Author Mick Herron is working on the seventh novel of the Slough House series which is ‘less M15, more 9 to 5’. Photograph: Mikael Buck

Mick Herron set out a decade ago to write a spy series about a group of failures and appreciates the irony that “it was self-fulfilling as it sank without trace”, his publisher dropping him like a hot chip.

Today, he is the spy writer in from the cold, “the John le Carré of his generation” in the words of crime writer Val McDermid, enjoying at last the slow swell of success. Slow Horses made it to number one with a new publisher, John Murray, after seven years. Joe Country, the sixth of the Slough House series, comes out next week and the slow-horse-powered bandwagon is only gathering speed and passengers.

Having cut his teeth with a series about private investigator Zoë Boehm “Bo-am, I’m a bit ridiculous giving her a name even I can’t pronounce” – the London bombings of July 2007 triggered a desire to write something more political about British society.

“I also wanted to write about a group of people rather than an individual. I was interested in writing about failure. This idea of writing about spies who were tethered to their desks seemed quite fruitful. Failures are more interesting than successes: they have all that regret, they act out, they feel thwarted and frustrated, not fun to live but great fun to write about.”

His spies have screwed up or been stitched up and sentenced to an awful annexe, Slough House – “less MI5, more 9 to 5”– under brutal, belching tormentor Jackson Lamb: “It was the Secret Service, not Secret Santa. Lamb had explained that when making them work late Christmas Eve.”

Alpha types trapped in gamma roles makes for war at the watercooler. A spy contemplating taking sides in a spat between colleagues reflected: “It’d be like choosing between Jeremy Clarkson and Piers Morgan in a bare-knuckle death match. There ought to be a way both could lose.”

Herron loves his characters being mean. “Essentially if I could get away with it I’d write a book that consisted just of people sitting in an office squabbling. Those are the bits that are most realistic and fun to write, but I do have to send them out to save the world occasionally. I’m baffled when people say I like your books but they start really slowly’. That’s kind of the point; it’s there in the title.”

I’m a narrative junkie, I like short stories. You can get through five or six in an evening, you are just mainlining narrative

Le Carré is, in Herron’s words, “the great spy writer of our times, who took the potential of genre fiction and showed it could be used to write about society as a whole. He is very good on the end of empire, looking for a role in the world.”

History repeats itself, the second time as farce. If le Carré was the ideal cold war chronicler, Herron, with his acid asides and withering wit, is the perfect muse for the hot mess that is Brexit.

The prime minister is “a needs-must choice, though she appeared to be the only person in the country unaware of the fact” who “wasn’t so much made leader as handed a janitor’s uniform”; her most likely successor “a toxic clown in the foreign office”.

Herron does not mince his words. He fillets Brexit and serves it bloody on a slab. “My feeling about Brexit is people with vested interests have manipulated and lied to large sections of the community. There is a part of me that would like to go back and burn down the bastions of privilege that allowed these people to take over in such a self-serving way. I find it quite despicable really.”

Boris Johnson is “one of about half a dozen people who fill me with dread. I think he would be an absolute disaster as the leader of the country. I’m a traditional Labour voter but they let the country down badly over Brexit. I couldn’t in all conscience vote for Corbyn.”

Herron is from a working-class Catholic background in Newcastle. His love of literature spirited him from a comprehensive to read English at Oxford, where he still lives. “If I had one word to sum me up, it would probably be reader, for reading has informed my lifestyle and my life choices since I was very small.”

He is a firm believer in quantity over quality for young readers. “Your teenage years are when you fill your well that you’ll be drawing on for the rest of your life.” He devoured thrillers – Dick Francis, Alistair Maclean, Agatha Christie – then John Steinbeck, Ernest Hemingway, F Scott Fitzgerald and Muriel Spark. “If she [Spark] was being published now, people would be saying nobody else is doing that.” And, of course, Graham Greene. “The Human Factor was a big influence. Ostensibly it’s about espionage and big world events but it’s all about human betrayal and love. The clue is in the title. It’s quite extraordinary.

“I’m a narrative junkie, I like short stories. You can get through five or six in an evening, you are just mainlining narrative.”

Given the tautness of his prose, the way it gets to the heart of the matter, it is no surprise that he trained as a subeditor. Given the style and polish of his sentences, nor is his past as a poet. “Writing verse was a huge education for me because it teaches you not just the rhythms of sentences and of the larger rhythms that operate within a book but also about the syllabic weight of words.”

Nowhere is this more evident than in his opening sequences, which, inspired by Charles Dickens’s Bleak House – “talk about hubris” – use a different guiding metaphor like a roving eye to set the scene. “It’s a good device for allowing new readers to catch up without exposition. By the time I get to the end of those scenes I feel I am back in the world I am writing about, home and dry though obviously with a lot of writing to go.”

“Cities sleep with their lights on, as if they’re afraid of the dark . . . streetlights make daisy chains out of the night . . . these chains resemble neural pathways, forging connections between a city’s hemispheres . . . Slough House is a neuron in an urban hippocampus . . . Deep within the building’s bones is the knowledge that some of its rooms that held two characters now hold only one; that formerly familiar impressions – the weight of a shadow on a wall; the pressure of a foot on a staircase – occur no more. This is what memory is: an abiding awareness that some things have vanished. And this is what consciousness is: the knowledge that more absences will come.”

For Joe Country, Herron re-read the first five books of the series for continuity purposes, but it also provided kindling, embers among the ashes of underdeveloped ideas and characters to explore. In a series, the established characters provide a skeleton, the political situation the backdrop, “so I see the plot as a maypole – stick it in and they all start dancing around it”.

He is a firm believer in making things up as opposed to too much research. “Does it matter a jot if the Fugue Protocol is a figment of your imagination so long as it is plausible? I sometimes feel like I’m the only spy writer who never worked for the Secret Service. There is a huge tradition – Ian Fleming, Greene, le Carré, Len Deighton, Somerset Maugham. Erskine Childers I think was shot as a spy, which is taking commitment to the genre a little too far.” (He was in fact shot for carrying an unlicensed firearm.)

He is already working on the seventh of the series and plans for a TV adaptation are progressing well. In an earlier book he likened Lamb to the actor Timothy Spall, a hostage to fortune he regrets. He also compares his monstrous creation to Reginald Hill’s Andy Dalziel and Shakespeare’s Falstaff. “That sounds massively pretentious but it’s not, it’s just lineage – he’s a man of huge appetites and roaring tempers. When you are writing the type of character who you hope is going to inhabit a page and burst into the margins you are burnishing a stereotype or an archetype of one sort or another.

“I would characterise him as someone who is shopfloor but has been promoted to management but whose heart is still with the people doing the actual work rather than having meetings. He is motivated by self-loathing, he has a dark past which I haven’t interrogated too closely. I don’t go into his head or his heart. If you did you’d know he either means everything he says in which case he’d be intolerable or he doesn’t, in which case he wouldn’t have an edge.”