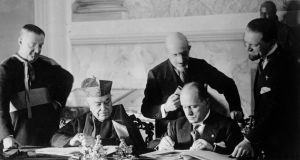 Book Title:
The Pope and Mussolini: The Secret History of Pius XI and the Rise of Fascism in Europe

In his maiden speech to the Italian parliament, in 1921, Benito Mussolini had spoken of the historical importance of the Catholic Church. When Mussolini became prime minister, in October 1922, the new pope, Pius XI, knew he had a politician with whom he could deal. By January 1923 Mussolini had held a secret meeting with the cardinal secretary of state and had agreed that the Jesuit Fr Pietro Tacchi-Venturi should serve as a direct personal channel between the pope and Mussolini.

In this fast-paced and well-written historical narrative David Kertzer tells the story of the relationship between Mussolini and the Vatican during the reign of pope Pius XI (1922-39), demonstrating the extent to which the church acted as a pillar of the fascist regime while the pope frequently called on the fascists to serve the moral, social and religious interests of the church.

Mussolini granted favours to enhance the role of the church in Italy, while the pope saw many advantages to be gained from a strong and sympathetic government in Rome. Neither Mussolini nor the pope had any love for parliamentary democracy, and both were willing to see the dissolution of the Popular Party as a vehicle for promoting Catholic interests, which could just as easily be served by a direct link between the pope and Mussolini.

The consequence of this new relationship was the opening of negotiations to resolve the status of the papacy in Italy, culminating in the Lateran Agreements of February 1929, which recognised the Vatican City state as a territory solely governed by the pope and regulated the position of the church in Italy. Of particular interest to Pius XI was the role of Italian Catholic Action, which was protected by the Lateran Agreements and designed to be a prime vehicle for permeating Italian society with Christian values.

Kertzer demonstrates how effectively Mussolini and Pius XI ushered in an era of good feeling between church and state. The support of the church for fascism was not weakened by the imposition of Mussolini‘s one-party dictatorship in 1925, when Pius XI still encouraged clerical support for the regime. Given the strong and abrasive personalities of both Mussolini and Pius XI, the relationship was not without its difficulties. Conflict over the independence of Catholic Action in 1931 resulted in an angry papal encyclical, followed by a settlement negotiated by Tacchi-Venturi. When Italy invaded Abyssinia in October 1935 the pope was apprehensive, but he muted his criticism when he found that Italian bishops and clergy were virtually unanimous in supporting the war effort.

It was Italy’s relationship with Germany that threatened the continuing relationship between Pius and Mussolini. When Hitler became German chancellor, in 1933, the pope acted to secure a concordat with Nazi Germany but then found Hitler to be less accommodating than Mussolini: the Nazis frequently and deliberately violated the concordat. With a closer relationship between Germany and Italy after 1936, Pius feared that Italy might emulate Germany in persecuting the church and sought to warn the Italians against close links with Germany.

By 1937 the pope had decided that Nazism was a greater threat to Christian society than communism and issued an encyclical critical of Nazi Germany.

Nevertheless, the Axis relationship was growing closer, and in the spring of 1938 Mussolini welcomed Hitler on a state visit to Rome. The duce feared the headstrong pope might make some public show of displeasure, perhaps by excommunicating Hitler, which could make it difficult to convince the Italian people of the importance of the German tie.

In the summer of 1938 Mussolini introduced anti-Jewish legislation. The pope, liking this less and less, secretly commissioned the American Jesuit Fr John LaFarge to prepare a draft encyclical opposing racism. Pius was particularly upset to learn that Italian racial legislation would prohibit marriage between Catholics and converted Jews, in violation of the Italian concordat. The fascists sought to ensure papal silence by threatening to attack branches of Catholic Action.

As the relationship between Pius and Mussolini started coming apart in 1938, a number of individuals in the papal court sought to preserve the relationship between the church and the fascist regime. Foremost in this group was Eugenio Pacelli, cardinal secretary of state, supported by Borgongini Duca, the nuncio to Italy, Tacchi-Venturi, and superior-general Ledochowski of the Jesuits. None of these men was particularly worried about the anti-Jewish campaign, as La Civiltà Cattolica, the journal of the Jesuits, had been anti-Semitic for years.

The pope had commissioned the LaFarge encyclical with the intention of driving a wedge between the Italians and the Germans. When Pius voiced his concern about anti-Semitism in August 1938, claiming that “Spiritually, we are all Semites”, Pacelli took great pains to ensure that these comments would not appear in print. Sensing the pope’s unease with Mussolini, Tacchi-Venturi negotiated a secret agreement in August 1938 whereby Mussolini guaranteed the integrity of Catholic Action and, in return, Tacchi-Venturi secured the pope’s agreement not to criticise the Italian racial legislation. When LaFarge sent the draft of his encyclical to Ledochowski, the latter set it aside and did not pass it along to the pope.

When Mussolini ignored the pope’s warning that the ban on racially mixed marriages was in violation of the concordat, the ailing Pius made a final gesture to secure Mussolini’s attention. The pope invited bishops and cardinals to attend a celebration of the 10th anniversary of the Lateran Agreements on February 11th, 1939, when he planned to speak out against fascist violation of the concordat. The pope died the day before the scheduled celebration, however.

Pacelli took charge of the Vatican on the death of the pope, destroyed copies of the pope’s prepared speech and returned the draft of the encyclical against racism to LaFarge. In March 1939 Pacelli was elected pope, styling himself Pius XII in deference to his predecessor. Yet he also moved to change the direction of the papacy by restoring good relations with the fascist regime, just as he took the initiative to improve relations with Hitler’s Germany.

This book is a readable popular history, with well-drawn characters and interesting incidental detail. It is also a serious study that incorporates the most recent scholarship made possible by the 2006 opening of the Vatican archives for the reign of Pius XI. Kertzer has also examined little-used collections, such as the papers of Tacchi-Venturi in the Jesuit archives and the Italian collection of police reports on the internal workings of the Vatican.

Of particular interest in this study is Kertzer’s demonstration that Pacelli’s formal relationship with Pius XI was not a particularly close one. More important advisers and facilitators for Pius XI were Tacchi-Venturi, who really managed the relationship with Mussolini, and Msgr Pizzardo, who was influential with Pius XI as the national chaplain of Catholic Action. In the last years of the pontificate Mussolini came more and more to rely on the men around the pope, and especially Pacelli, to sustain the support of the church.

The role of Pope Pius XII in not speaking against the Holocaust has been the subject of historical “Pius wars” between prosecutors of and apologists for Pius XII. Kertzer claims that too many of these debates have dealt with the relationship of the Vatican with Germany but that few scholars have examined Pacelli’s role in Italy in the years before the war and, particularly, Pacelli’s work in preventing Pius XI from upsetting the close collaboration between church and state in Italy. Peter Kent lectures at the University of New Brunswick, in Canada. His books include ‘The Lonely Cold War of Pius XII’ and ‘The Pope and the Duce’

The Invisible Man review: Tenser than Christmas at the in-laws’
5