Harry Potter: A World of Magic – celebrating 20 years of the boy wizard 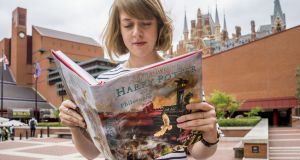 ‘Harry Potter: A World of Magic’ is a lavishly illustrated coffee-table book

The library at Hogwarts School of Witchcraft and Wizardry holds a special place in the imagination of all Harry Potter fans. Tucked away on the first floor of Training Grounds Tower, it is a repository for tens of thousands of magical tomes: histories of wizards, encyclopedias of dangerous spells, and dissertations on the dark arts. There are invisible books and books that scream when you open them, portfolios of potent potions and countless volumes about venomous beasts. It is presided over by the fearsome Irma Pince, who has her own library of jinxes and hexes to call upon in lieu of fines. Beware those who trespass against her strict rules.

In the years since the final instalment of Harry Potter’s adventures, JK Rowling has enabled ardent Potter fans to explore some of Hogwarts’ most treasured titles. What muggle could resist the lure of dragon lore contained in Fantastic Beasts and Where to Find Them, “an approved textbook” that the wily trio of central characters consult as they plan their assault upon Voldemort?

Or Quidditch Through the Ages by Kennilworthy Whisp, a history of the sport that acts as a key plot device in Harry Potter and The Goblet of Fire? Or, indeed, The Tales of Beedle the Bard, the classic fairy tales that Harry and his friends were reared on. The publication of these titles was a genius metafictional coup that was proved to have endless marketing potential.

A World of Magic

This week readers can add another volume to their personal library of Potter-lore. Harry Potter: A World of Magic is a lavishly illustrated coffee-table book that celebrates the 20-year anniversary of Harry Potter and the Philosopher’s Stone.

Published to accompany a new exhibition at the British Library, it places Rowling’s fiction beside the cultural traditions that inspired them. The potions and herbs of Hogwarts find kinship with the history of alchemy and medicine, while Prof Dumbledore’s expertise in divination and the dark arts is echoed in the astrological explorations of the western and non-western world.

For every fantastical creature that Rowling invented, there is a mythic counterpart: the Hungarian Horntail has nothing on the legendary Chinese Dragon. Indeed, the exhibition’s artefacts are often more impressive than the art they inspired. There are grizzly, gnarled Chinese Oracle bones that recorded a lunar eclipse in 1192 BC, a real witch’s broomstick, and a 400-year-old celestial globe, enhanced with augmented reality technology, which enables visitors to explore the constellations that gave many of the characters in Harry Potter their names.

Other exhibits have a more direct correlation with the universe of Hogwarts, eliding the distance between fiction and reality, magic and myth. There is a 14th-century alchemical manuscript called The Ripley Scroll, which describes how to make the Philosopher’s Stone, in a series of step-by-step instructions that can be rolled out in more than 6m of parchment paper. A glass cabinet holds the mummified remains of a grotesque mermaid, far scarier than the merpeople who oversee the Triwizard Tournament in The Goblet of Fire. It was allegedly caught in Japan in the 18th century. There is even a tombstone for Nicholas Flamel, Dumbledore’s old associate, who was a real alchemist and suspected wizard operating in Paris in the 14th century.

The accompanying book is a beautiful artefact, applying scholarly expertise to the cultural history of myth and magic as well as Rowling’s work. Essays by commentators from the world of children’s literature and world history sit side by side with Rowling’s own revelations about her inspiration. There are also excerpts from Rowling’s original handwritten manuscripts, complete with hurried additions and revisions scrawled in the columns. Anyone with a passion for Potter will be amazed to see the black and white drawings the author made while writing, to help the world of Hogwarts feel more real.

Rowling could probably have illustrated the original publications herself, although some of Jim Kay’s sumptuous paintings, commissioned for the first illustrated editions of the books, are also reproduced in full colour here.

At €35, Harry Potter: A History of Magic comes with a collector’s price tag, but you might be better off spending the money on Kay’s anniversary editions instead. The first three were released earlier this year, and they are artefacts of great beauty that you can well imagine taking pride of place at an exhibition in the British Library in centuries to come.

How do I get my teenager off her phone and back reading?
Real news has value SUBSCRIBE