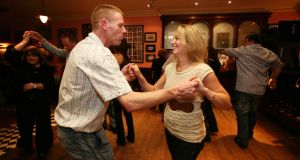 The hormone-fuelled optimism of Lisdoonvarna: Joe Copse from Newcastlewest and Maura O’Connor from Galway enjoying a dance at the Matchmaker Bar. Photograph: Eamon Ward

One of the funny things about most journalism is how, by the time an article is being read, its author has moved on to the next story.

It’s a fast-moving profession where little thought is given to the incremental effect of the output. If differentiated and considered, journalism fills in important cultural blanks. But simplistic or skewed journalism – such as decades of British EU coverage – can be as poisonous to minds as lead water pipes.

For this writer, as Berlin correspondent of The Irish Times, the recent crisis years have involved careful negotiation of mined territory. A common question on visits to Ireland – “What do the Germans think of us?” – was impossible to answer.

The honest response – most Germans don’t think about Ireland at all – caused offence, given the economic sacrifice demanded by the troika. But my qualified, diplomatic answer – when Germans think of Ireland, they see a hard-working people anxious to get back on their feet – was often rejected as patronising. It seems that, when explaining Ireland to Germans, you just can’t win.

Now Fergal Lenehan, an Irish academic who teaches in the eastern German city of Jena, has done us some service with a new book that fills in an important gap in Irish-German relations.

Stereotypes, Ideology and Foreign Correspondents, his study of Irish articles in two weekly news publications, Der Spiegel and Die Zeit, between 1946 and 2010.

He introduces non-German-speaking readers to the centre-left Spiegel magazine and the liberal Zeit newspaper and provides very readable social and historical narratives of two belated nations chasing post-war transformation: (West) Germany’s road back to respectability and unity and Ireland’s road to modernity from what John McGahern once dubbed a “theocracy in all but name”.

A fascinating part of Lenehan’s study – apart from being the first of its kind and scale – is the amount of material he has to study.

Der Spiegel ran 327 Irish-related articles over the period, while the island was even more popular in Die Zeit, with 417 articles. Taken together, these two influential outlets alone averaged about one Ireland article a month over the past 64 years. Not a bad average, given neither outlet employs a full-time correspondent in Ireland.

In the early years, Lenehan notes that Der Spiegel drew heavily on British media for its coverage of the “stubborn” Irish, while Die Zeit texts “are noticeably oriented towards direct experience” – two different approaches that continue to this day.

He also observes an interesting media game where journalists are forever building up well-worn Irish cultural stereotypes familiar to their readers (alcohol, rain, religion) to topple them in order to highlight the changes they perceive on their visits.

Die Zeit is quicker to spot the change, such as an excited 1967 article telling its German readers that “in Ireland, the future has begun”.

In subsequent years both publications’ coverage of Ireland was dominated by the Troubles, but the last period of study (1994-2010) has seen growing diversity of coverage once more. While cliches live on in Der Spiegel, a 2010 article name-checks “hard drinkers and stubborn terrorists” to show readers how far the island has changed.

Reading Lenehan’s summaries of these texts reveals an Ireland that – to paraphrase a German description about Berlin – is always becoming, never being.

Not that Sotscheck is averse to cliche. His weekly column on Mondays has driven more than one Irish ambassador in Berlin to despair. But whenever they challenge the veracity of a fact or embellishment, Sotscheck points out drily that his column appears on the newspaper’s satire page called Die Wahrheit (“The Truth”).

After several collections of columns, his latest book Mein Irland marries memoir with travelogue and takes his German readers around the Irish countryside and under the skin of the Irish.

One of the many characters he encounters on his journey – Sotscheck loves Irish characters – points out how Ireland had produced four Nobel laureates for literature but none for economics.

“Optimism, like creativity, is part of the Irish cultural DNA,” artist Brian McCarthy tells him for a bailout-era chapter, Boomtown and Exodus. “The crisis won’t change that.”

For Fergal Lenehan, coverage of Ireland in Der Spiegel and Die Zeit – particularly in the recent Celtic Tiger era – reinforces a German view of Ireland as a country beyond the European pale.

What he identifies as “exclusionary Europeanism” is, he says, based on a wobbly assumption that the reporting journalists’ own German norms constitute a kind of European cultural control value.

Of course, discussing Europeanism – a term defining what constitutes European norms and values – is a slippery business in itself. For orientation, Lenehan cites a 2003 essay by German philosopher Jürgen Habermas that boils down the European soul to values that include post-nationalism, advanced secularism, a suspicion of pure market economics, a strong belief in the welfare state and a low tolerance of violence.

Typical for this view of Ireland’s “incomplete Europeanism”, Lenehan says, is a 2010 Die Zeit piece by Jochen Bittner, arguing that the fall of the church and the rise of the euro prompted the newly prosperous Irish to embrace materialism rather than any enthusiastic form of “Europeanism”.

With an eye on Ireland’s corporate tax rate, he wrote: “For many years they practised anything but an meitheal with their Europe partners.”

Perhaps this doubt about Ireland’s European vocation flagged by Lenehan was one source of Irish-German tensions in the bailout years. But, as Lenehan stresses, Ireland is by and large portrayed in the German media in a remarkably positive light.

For the German-based Irish academic, looking at Ireland through the German lens may help us identify national characteristics that are difficult to discern from the inside.

Embracing the notion of “Europeanism” that German journalists seem to feel we lack, Lenehan argues, could prove a positive force in Ireland’s post-bust era.

“It could help give Ireland a greater social orientation,” he said. “Embracing European secularism could, for instance, help tackle non-Catholic exclusion in Irish schools.”

Stereotypes, Ideology and Foreign Correspondents by Fergal Lenehan is published by Peter Lang as part of the “Reimagining Ireland” series. Mein Irland by Ralf Sotscheck is published (in German) by Mare