How a line you hear, read or write can light a fuse 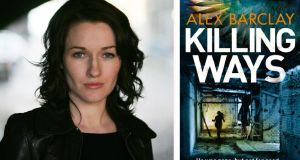 “I’m the bomb and I’m ‘bout to blow up.” That one line - from Pigeon John’s song, The Bomb - established the idea for my new novel Killing Ways. I listened to it on repeat in the early stages. It captures my heroine and the serial killer she’s hunting; two opposing characters with very different motivations on merging paths of self-destruction. They’re both fixed in their beliefs, bound by what they feel is right, solid in their conviction.

This is the fifth book I’ve written featuring bipolar FBI agent, Ren Bryce. Because of how the previous book ends, I knew that I’d be riding the bucking bronco of manic Ren for Killing Ways. She is unmedicated, working hard, partying hard, and fighting hard. The next defining line was the one I wrote on mania and how it worked like “broad brushstrokes of black paint swept across a rainbow, but to the manic, the black is neon… and neon is brighter than any rainbow.”

It was on my mind as I wrote, Ren’s skewed sense that the darkness was something brilliant and glowing, when, in fact, it was engulfing and suffocating. Her aim is simply to sustain that glorious manic high. It’s a logical motivation if you’re seeing neon. It’s a powerful force propelling her that will ultimately lead her to the extinguishing of the light.

Ren usually has her boss to anchor her, but he’s taken his eye off the ball for personal reasons, and in this semi-present state, has made her case agent on a major serial killer investigation. At the beginning, she has clarity, she recognises a serial killer is at work, she links disparate crimes by finding a below-the-surface commonality. The success itself is a high, and it's amped up by the raised stakes of the depravity of the crimes.

When it comes to the pursuit of the killer, Ren becomes obsessive, operating on minimal sleep and food, maximum aggressive exercise. Her boss questions her at one point about how much sleep she’s surviving on and she answers, “I’m more than surviving”, and she thinks, “I’m ****ing thriving.” And she is, in a way. But she’s still a bomb and about to blow up.

But Ren’s personal life is never the entire focus. It’s a crime novel, so the crime itself is the point. The investigative cast is ready, and after that I’m thinking of a crime that will create drama, mystery, pace, but one that will also keep me interested for the duration.

In Killing Ways, it was exciting to pit Ren against someone who was chasing their own high; a serial killer who finds his by raping, murdering, and mutilating women. Inside his mind is an ugly place to be. His thoughts have been skewed all his life, there has never been hope. His craft is honed, and his terrifying mindset carved out from an early age.

He suffered horrific abuse, never had any stability, never had a real home; common factors in the evolution of a serial killer, but the uniqueness comes from how this plays out, and how it effects Ren and her colleagues. There has been great tragedy in his life, and for a few moments, you might feel his suffering, you might empathise, but you are swiftly reminded that he is an unmitigated, unrepentant psychopath. I want readers not just to feel all the emotions, but to be torn by them.

There’s just one narrative line to follow in Killing Ways, which differentiated it from the previous Ren books; the first four have multiple sub-plots. In this, the route is direct, one foot in front of the other, moving at a rapid pace and accelerating. I wrote it in an intense burst of time, which seemed to reflect how the investigation advanced.

I always write the closing scenes early on, though, because I like my end point to be clear. It was the grimmest one I’ve ever worked towards, like sprinting to a finish line that read “Welcome to Your Worst Possible Nightmare.” I felt a perverse draw. I care about my characters, so I don’t want to hurt them.

With Killing Ways, I de-stabilised Ren’s entire world. It’s like a cruel tablecloth trick; characters whose places I’ve carefully set out over the past four books are now in the air and you don’t know where they’ll land, or whether they’ll break in the fall.

Killing Ways by Alex Barclay is published by HarperCollins and goes on sale in Ireland on April 9th.