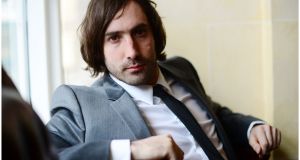 Grace by Paul Lynch is June’s Irish Times Book Club selection. Earlier this week, it won the €15,000 Kerry Group Irish Novel of the Year award at Listowel Writers’ Week and it has been shortlisted for the £25,000 Walter Scott Prize for Historical Fiction (the winner is to be revealed on June 16th) and the $5,000 William Saroyan International Prize for Writing.

Grace is published in paperback by Oneworld on June 7th. Lynch will be interviewed by Laura Slattery for a podcast at the Irish Writers Centre in Dublin’s Parnell Square on Thursday, June 21st, at 7.30pm.

Overr the next four weeks, the author, fellow writers, critics and academics will explore the work in articles published in The Irish Times.

Charles Shafaieh, reviewing for The Irish Times, called it “haunting and poetic”. “Unlike the ‘novelese’ favoured by too many contemporary writers, these are sentences worth reading slowly. Though only suggesting the possibility of future greatness with Grace, Lynch has given us poignant glimpses of the human body’s limits, that peculiar messiness of identity, and what happens when parts of a society fail to help, or even acknowledge, those in need.”

Early one October morning, Grace’s mother snatches her from sleep and brutally cuts off her hair, declaring, “You are the strong one now.” With winter close at hand and Ireland already suffering, Grace is no longer safe at home. And so her mother outfits her in men’s clothing and casts her out. When her younger brother Colly follows after her, the two set off on a remarkable journey in the looming shadow of their country’s darkest hour.

The broken land they pass through reveals untold suffering as well as unexpected beauty. To survive, Grace must become a boy, a bandit, a penitent and, finally, a woman – all the while afflicted by inner voices that arise out of what she has seen and what she has lost.

The Washington Post called Grace “a moving work of lyrical and at times hallucinatory beauty… that reads like a hybrid of John Steinbeck’s The Grapes of Wrath and Cormac McCarthy’s The Road”. It was a book of the year in the Guardian, the Irish Independent, Kirkus and Esquire, a Staff Pick at The Paris Review and an Editors’ Choice Book in the New York Times Book Review.

“A mesmerizing, incandescent work of art. It’s all things together – a tragedy, an adventure, a romance, a coming-of-age, a searing exposition of historical truths; an interrogation of the nature of time and existence. Above all it’s a perfect story, an exhilarating, Odyssean, heart-pounding, glorious story, wrought by a novelist with the eye and the ear and the heart of an absolute master. Paul Lynch is peerless. Grace Coyle, daughter of Coll, will be one of the enduring heroines of world literature.”

“The power of Paul Lynch’s imagination is truly startling; his ability to inhabit and deeply understand the moments, both slight and shattering, of a life and of an era translates into an instinct not just for story, but for the most hidden, most forceful currents of language and what they can do.”

“Grace is a thing of power and of wonder, from the savage scalp-shearing of its start, through pages of figurative and literal black, to the ‘good blue days’ of its end. Paul Lynch writes novels the way we need them to be written: as if every letter of every word mattered. This whole book is on fire.”

Lynch was born in Limerick in 1977, grew up in Co Donegal, and lives in Dublin with his wife and daughter. He was the chief film critic of Ireland’s Sunday Tribune newspaper from 2007 to 2011, and wrote regularly for The Sunday Times on film. He is now is a full-time novelist.

After a six-publisher auction, Lynch’s debut novel Red Sky in Morning was published to critical acclaim on both sides of the Atlantic in 2013. It was a finalist for France’s Prix du Meilleur Livre Étranger (Best Foreign Book Prize) and was nominated for the Prix du Premier Roman (First Novel Prize).

His second novel The Black Snow was published in 2014 in the UK and Ireland and 2015 in the US. In France it won the French booksellers’ prize Prix Libr’à Nous for Best Foreign Novel and the inaugural Prix des Lecteurs Privat. It was nominated for the Prix Femina and the Prix du Roman Fnac (Fnac Novel Prize).