‘Bad girls’: When the Irish State sought to ban emigration of young women to Britain

‘Many of the young girls who emigrate become pregnant,’ said an official document 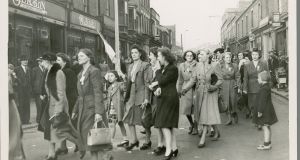 In December 1947 Ireland’s Department of External Affairs prepared a lengthy missive for Taoiseach and Minister for External Affairs Éamon de Valera on the perennially vexing problem of emigration.

It explored the reasons that lay behind it, and whether new economic strategies could stem the flow of emigrants overseas by providing employment at home. It accepted that Ireland’s experience was in line with some international trends (such as advances in farming that made agricultural labour increasingly redundant, and ‘that psychological urge toward migration from the rural to the urban areas which is the outstanding social phenomenon of every country in Europe today’).

But one distinctive aspect of Irish emigration was singled out as being of particular concern: ‘male emigration is not so serious … What is serious is the emigration of the young girls. It is serious and sad from every point of view, and, if it continues at its present rate, a decline in the national population is to be feared even if present marriage and birth rates are maintained’.

According to this account, a disproportionate number of Irish emigrants were women under 25. While the discussion was framed by the socio-economic causes and consequences of emigration, the focus on Irish women as a critical demographic was revealing. Since the 1930s Britain, which had always been a key destination for Irish emigrants, took over from the US as their primary destination, and the right of Irish citizens to travel and work in the United Kingdom survived Ireland’s departure from the Commonwealth in 1949.

The growth of the new welfare state and the demands of postwar reconstruction and rearmament created employment opportunities in Britain that were filled by the Irish and the Windrush generation. But the myriad vices that allegedly lurked in postwar Britain were claimed to pose a danger to the female youth of Ireland.

In August 1947 it had been noted that ‘nothing effective can be done to protect the moral and social interests of girls going to domestic service once they have left the country’, but ‘while admitting the moral dangers for young girls in Great Britain’, the official view of Ireland’s Department of External Affairs was that ‘it would be difficult to justify State interference’.

Fast forward to the following year. Following a change of government, it became apparent that while a paternalistic attitude towards female emigrants remained a running theme, a new attitude had also emerged. In September 1948 a draft memorandum prepared for the first Inter-Party government claimed that ‘a great many of the young girls who emigrate to Britain become pregnant; many of the reports are tragic and alarming in the extreme … The continued emigration of large numbers of young women is a disquieting feature of our national life and one which gives rise to serious concern on moral, social and demographic grounds’.

How best to tackle it? Despite the relatively nuanced analysis of emigration put forth a year earlier, the solution proposed here by the new Minister for External Affairs, Seán MacBride of Clann na Poblachta, was a blunter instrument with a revealing origin: ‘that the present flow of emigration of females be restricted, by the prohibition of the emigration of persons under the age of 21’ (albeit with some specified exceptions), a course of action that, based on ‘informal conversations the Minister  [MacBride] has had with members of the Hierarchy’, was likely to ‘secure the warm approval of the Hierarchy’.

Unlike those who assumed that Irish women lacked agency of their own, and were thus easily lured across the Irish Sea, Boland had a more sanguine view of the attractions on offer in Britain.

Some senior diplomats took a different view. Frederick Boland, the Irish Ambassador in London, noted in August 1952 that ‘I don’t suppose that any single question has been given more anxious and painstaking consideration in the Department within the last seven or eight years than this matter of the migration of young and immature Irish girls to this country … Previously the material means of stopping the traffic existed because the travel permit system was still in force; the essential difficulty was that any official action in the matter involved the substitution of the State for the parents as the judge of the best interests of the female’ (precisely the issue that had animated clerical opposition to the ‘Mother and child scheme’ of the Fine Gael-led Inter-Party government). There was also the very real prospect of such a measure proving deeply unpopular with the public.

But unlike those who assumed that Irish women lacked agency of their own, and were thus easily lured across the Irish Sea, Boland had a more sanguine view of the attractions on offer in Britain. He argued in July 1954 that ‘among the principal reasons which bring our young people to England are motives such as to see the world, to be independent of family control and public opinion, to earn more money and to experience the novelty and excitement of city life’.

For many young men and women, the bright lights of British cities offered an attractive alternative to what was still a conservative, predominantly agricultural society that did not permit a great deal of upward mobility. Indeed, by January 1958 it was recognised that domestic service in Britain, which was a major occupation for young female emigrants, had become a stepping-stone to better prospects rather than just being an end in itself.

Might the emigration of a pregnant Irish women be linked to a desire to escape the judgment of a society that would assume that she was a ‘bad girl’ in the first place?

The Catholic Church and social organisations were crucial conduits by which Irish officialdom kept track of the diaspora in British cities. When, in November 1961 the Independent TD Frank Sherwin asked (on foot of information from an unnamed priest) whether the government might impose controls on emigration, as there were supposedly 600 ‘young Irish girls on the streets of London, many of whom were teenagers from the Gaeltacht’, it prompted a phone conversation between Brendan O’Riordan of the Department of External Affairs and Monsignor Cecil Barrett, the Director of the Catholic Social Welfare Bureau (‘the “right hand man” of His Grace the Archbishop of Dublin [John Charles McQuaid] in these matters’).

O’Riordan recorded that Barrett suggested a figure of 600 ‘would not, in fact, represent anything extraordinary … Monsignor Barrett and I agreed that the modernisation of Ireland, which we are using our best efforts to bring about … is bound to have a permanent effect on the outlook of our “teenagers” which cannot be altered by any Government controls or restrictions whether the teenagers remain in Ireland or go to England or elsewhere. The proportion of “bad girls” in Ireland even in the country parts and even, perhaps, in the Gaeltacht is very possibly nearly as high as it is in London … However, the number of unmarried Irish girls who have children in London every year … indicates that quite a number of the girls are pregnant on arrival in London’.

The latter point was more honest than in 1948, when such ‘girls’ had allegedly only become pregnant after arriving in England. And while O’Riordan and Barrett struck a realistic note in accepting that this was, perhaps, the way of the world, there seemed to be a blind spot in terms of the assumptions underpinning their exchange. Might the emigration of a pregnant Irish women be linked to a desire to escape the judgment of a society that would assume that she was a ‘bad girl’ in the first place?
John Gibney is assistant editor with the Royal Irish Academy’s Documents on Irish Foreign Policy (DIFP) series, which publishes archival material relating to Ireland’s foreign relations since 1919, and is the co-author (with Michael Kennedy and Kate O’Malley) of Ireland: A voice among the nations. The documents published in the DIFP series for the years 1919-1948 are freely accessible at difp.ie. DIFP Vol. XII, covering 1961 to 1965, will be published later in the year.