Shortlisted author Tsitsi Dangarembga due in court on Friday; no joy for Colum McCann 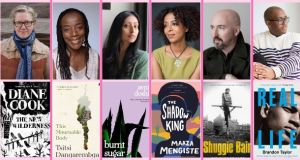 US and African authors dominate this year’s Booker Prize shortlist, which features only one – a New York-based Scot – from Britain or Ireland.

Shortlisted Zimbabwean author Tsitsi Dangarembga is due in court on Friday in Harare, having recently been arrested in the capital, Harare, during a peaceful protest against government corruption. English PEN and PEN International are calling for the immediate dropping of all charges.

Her novel, This Mournable Body, is the third book in a trilogy following Nervous Conditions (1988), winner of the Commonwealth Writers’ Prize, and The Book of Not (2006).

Newly eligible after a change in the prize rules, Ethiopian-born author Maaza Mengiste’s The Shadow King is the story of a woman who joins the fight against Mussolini’s invading army, based on her family history - both her great-grandmother and grandfather fought in the conflict .

Margaret Busby, chair of the judges, said: “As judges we read 162 books, many of them conveying important, sometimes uncannily similar and prescient messages.

“The best novels often prepare our societies for valuable conversations, and not just about the inequities and dilemmas of the world – whether in connection with climate change, forgotten communities, old age, racism, or revolution when necessary – but also about how magnificent the interior life of the mind, imagination and spirit is, in spite of circumstance. The shortlist of six came together unexpectedly, voices and characters resonating with us all even when very different. We are delighted to help disseminate these chronicles of creative humanity to a global audience.

‘The novels on this year’s shortlist range in setting from an unusual child growing up in working-class Glasgow in the 1980s, to a woman coping with a post-colonial nightmare in Zimbabwe. Along the way we meet a man struggling with racism on a university campus, join a trek in the wilderness after an environmental disaster, eavesdrop on a woman coping with her ageing mother as they travel across India and in an exploration of female power discover how ordinary people rose up in 1930s Ethiopia to defend their country against invading Italians. It’s a wondrous and enriching variety of stories, and hugely exciting as well.”

Gaby Wood, literary director of the prize, said: “Every year, judging the Booker Prize is an act of discovery. This year there has perhaps been more discovery than usual. What has transpired is a testament to the judges’ faith in – among other things – first fictions: they have found these writers to have much to say, and found them to have said it in a way that became even richer on a second reading.”

There is no place on the shortlist for Hilary Mantel’s The Mirror & the Light, the concluding part of her Thomas Cromwell trilogy, the first two of which, Wolf Hall (2009) and Bring up the Bodies (2012), each won the Booker Prize. Other big names such as Colum McCann, the only Irish author on the longlist for his Israeli-Palestinian epic, Apeirogon, and Anne Tyler also missed out, as did the critically acclaimed Who They Was by Gabriel Krauze and Such a Fun Age by Kiley Reid.

The £50,000 (55,000), prize will be awarded on November 17th. It was won jointly last year by Girl, Woman, Other, by Bernardine Evaristo, and The Testaments, by Margaret Atwood. The other judges are Lee Child; Sameer Rahim; Lemn Sissay; and Emily Wilson.