Giving a voice to the lonely

The lonely and the isolated can often be depicted as introverts, burrowed away in their rooms, burdened by their inherited shyness. But sometimes it is those who are seeking your attention who can be the loneliest 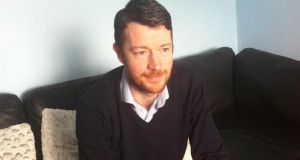 Daniel Seery: “It is the curse of the modern era that in expanding the avenues of communication there seems to be more gaps opening for people to fall into”

You just have one of those faces

That’s what people say to me when odd things come my way. Like the time I visited the zoo and a spider monkey began screeching as soon as I entered its line of vision, continuing to shriek at me until I was safely past the lemur enclosure. Or the time I was strolling to the library where I work and two burly undercover gardaí stopped and searched me. What started out like a scene from The Professionals soon began to resemble an absurd magician’s act as I proceeded to pull unusual objects from my pockets, hair clips decorated with butterflies, a tiny pair of sunglasses, broken twigs, a stone that looked a little bit like a startled cat from a certain angle,all things I had yet to remove since an excursion to the park with my daughters the previous day.

“You just have one of those faces,” I was consoled with later on that evening.

“I’m not a criminal. I wasn’t even a rebellious teenager. I was a member of the afterschool computer club. That’s a club for kids who still can’t afford a Commodore 64 for God’s sake!”

Another thing which comes with having “one of those faces” is that strangers repeatedly approach me out of the blue and tell me random things about their lives. This might be a meticulous description of a bus route they have taken or an outline of a particularly interesting purchase they made recently. Sometimes it may even be an extremely personal issue they are going through. For me, the significant detail doesn’t always lie in what these people are telling me, more so it relates to why they are saying it.

The lonely and the isolated can often be depicted as introverts, burrowed away in their rooms, burdened by their inherited shyness. But sometimes it is those who are seeking your attention who can be the loneliest, the folk who approach you at bus stops and in shopping centres, people who merely crave the company of another person. When I was working on my novel, A Model Partner, I wanted to have a character exactly like this and so Tom Stacey was born, an overly honest individual, socially naïve in some ways but a man with a lot of heart. Tom was an opportunity for me to investigate the paths which might lead a person to the fringes of society, a chance to investigate how a person’s circumstance can be the result of other people’s choices as much as their own.

Loneliness has played major and minor roles in a lot of my material. A short story of mine was inspired by a group of dwellings close to the estate where I live, muted, flat-featured homes specifically built for elderly residents. The rear of these properties was separated from a public path by a chunky metal railing. From the outside you couldn’t help but consider the lack of privacy for the residents of that build. But it was a restricted kind of openness, because the railings instantly made you think there was a divide between the tenants and the rest of the community.

These dwellings were set for demolition a few years back so the council were no longer finding tenants when one emptied. I couldn’t help but think that each boarded-up window signified another death in the place. One time I noticed a wooden stool next to a recently boarded-up door, a dented bucket with cigarette butts in the bottom. I remember thinking how sad it was that nobody had cared enough to clear away these items after the tenant died and how the loneliness which follows a person through life can linger even after they have gone.

The world is changing rapidly and so are communities. People’s lives follow different patterns. The internet has seen the growth of new communities with global reach. There is a different kind of loneliness evolving. It is the curse of the modern era that in expanding the avenues of communication there seems to be more gaps opening for people to fall into.

I believe, at the heart of it all, the majority still want and need an immediate community but it can’t survive solely on social responsibility. It feeds on trust and understanding. People need to know what’s going on in their area, with particular focus on the positive things. I don’t mean in the fashion of “Your glorious leader declares this neighbourhood to be swell”. More in the way of “Local teenagers volunteer in retirement home for summer”.

About six months ago my two young daughters began a liking for cardboard tubes, collecting them from tinfoil, kitchen or toilet rolls, cling-film. They’d draw facial features on the tubes and call them Tube-guys. What started out as a few quickly grew to many. I started to see them wherever I went in the house, balanced on every flat surface, an army of Tube-guys watching me, some smiling and others frowning, some withsmall round circles for their mouths (I’m still not sure if these ones were surprised or embarrassed by my presence).

I found a damaged one on the kitchen table and I was just about to chuck it into the recycle bin when my eldest daughter stopped me.

“Don’t throw him out,” she screamed.

“But he’s ripped,” I said. “And there are millions of them all over the place.”

“You can’t throw him away.”

“Because then he’ll be all on his own,” she sighed and placed the Tube-guy with a faction of his allies.

I have to admit I was proud that she hated the idea of this little character being separated from the rest of the group, this cardboard guy with his mismatched eyes and bobbled extremities, with his torn forehead and flat bottom. As long as the fight for the likes of him is still in our kids, I thought, there will always be hope for the future of communities.

A Model Partner by Daniel Seery was published earlier this year by Liberties Press, at €13.99. Daniel will be taking part in a spoken word event in the Light Colour Sounds Festival in Kilkenny on July 4th/5th and at the Red Line Book Festival on October 14th. danielseery.com libertiespress.com