Áine Ní Ghlinn’s Laureate na nÓg lecture calls for an end to the invisibility of children’s writing, especially in Irish 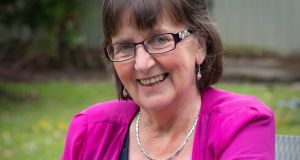 When the Greek hero, Perseus, set out to kill Medusa, who had venomous snakes instead of hair, he was given the Helm of Hades; a magic cap that rendered him invisible. Having beheaded the gorgon, it was this gift of invisibility that helped him to escape from her immortal sisters. More recently, the young magician Harry Potter could vanish simply by slipping under his invisibility cloak. He used it on many occasions in his ramblings around Hogwarts.

I too have an invisibility cloak. I wear it when I write, as do all writers who work as Gaeilge. Indeed, so do the vast majority of children’s writers, no matter what language they write in. Books that are written for children have a tendency to slip under the radar, unreviewed, under the invisibility cloak.

In 2015, research in Britain by #CoverKidsBooks found that children’s books got just 3 per cent of book review space, even though they accounted for over 30 per cent of the market. Speaking at the time, journalist and children’s director of the Hay Festival, Julia Eccleshare, said this lack of coverage devalues children’s literature. “If we don’t have reviews, we are belittling the crucible of reading. If we don’t have reviews, there is only noise.”

When it comes to reviewing Irish language books for children, there isn’t even noise. There is only silence.

Often those of us who write for children are asked: ‘When will you write a real book?’ This suggests a real book is a book for grown-ups and that children’s writers secretly aspire to writing for adults.

Those of us who write for young people as Gaeilge are, therefore, doubly invisible. We wear both the cap and the cloak. The difference between us and Perseus or Harry Potter is that they could choose when to disappear. Ours is not a choice.

We choose to write in Irish, even though the vast majority of us (probably, all of us) are equally fluent in English. The more important question for me is not “is there a choice?” but “is there a value in that choice?” I believe there is. Yes, there are drawbacks to being invisible, but for me, as a writer, the advantages far outweigh the disadvantages.

In time, I have come to see invisibility as both a gift and a burden. On the positive side, I have absolute freedom to move from genre to genre. My Helm of Hades isn’t just a cap of invisibility, it’s a cap of flexibility. I can be a poet today, a novelist tomorrow and a dramatist the day after that.

But what good is it if nobody knows my work exists? A recent survey undertaken by Children’s Books Ireland found that for those involved in Irish language books and reading (parents, publishers, authors, teachers), the invisibility of children’s books in Irish is the greatest challenge.

The readers are out there but the books are nowhere to be seen.

Today in Ireland, over 45,000 schoolchildren are receiving their primary education through Irish, learning to read as Gaeilge before, or at the same time as, they learn to read in English. Add to this, the number of young people attending second-level gaelcholáistí and we have 60,000 young people who can read fluently in Irish.

That’s a substantial number. However, most bookshops carry only a limited number of Irish language books for children. According to booksellers, this reflects demand; not many customers ask for children’s books as Gaeilge. But how can you ask for something if you cannot see it? If you do not even know it exists?

Never before has there been so many beautiful Irish language books, and picture books in particular, on the market. At this year’s KPMG Children’s Books Ireland Awards, the 10-strong shortlist for Book of the Year featured three Irish language books: Scúnc agus Smúirín by Muireann Ní Chíobháin; Kim Sharkey’s Mór agus Muilc, which took the Eilís Dillon children’s debut award; and Nóinín, a young adult novel by Máire Zepf that went on to win the coveted Book of the Year award.

If you don’t know what book to buy, check out the websites of Irish language publishers, An Gúm; An tSnáthaid Mhór; Futa fata; Cló IarChonnacht; Éabhlóid; LeabhairComhar; Leabhar Breac; Cló Mhaigh Eo; Cois Life; Móinín. Look at the illustrations, the blurbs, and the recommended reading age, then choose. You don’t need to speak Irish to buy Irish.

Whatever your role, parent; grandparent; godparent; aintín; nó uncail, please give one Irish language book to a child you know this Christmas. I urge you to support your local bookseller. Don’t let the name of the book you are buying get lost in translation, the shop assistant you are dealing with may not speak Irish, so give them the ISBN when ordering your book.

Help me, in my role as Laureate na nÓg, to lift just one corner of the invisibility cloak, to give our children the joy of reading as Gaeilge as well as as Béarla.
Áine Ní Ghlinn’s inaugural Laureate na nÓg lecture, Lifting the Invisibility Cloak, will be launched on December 1st at 6pm as part of Dublin Book Festival on the website wordsireland.ie, where you can view the entire Words Ireland Lecture Series 2020 featuring Colm Tóibín, Jessica Traynor, Róisín Kiberd, Paul Murray, and Brian Dillon.
The Arts Council announced today that as of now the Laureate na nÓg will receive the same stipend as the Laureate for Irish Fiction and the Ireland Chair of Poetry, €50,000pa and the term will be three years long. Currently, the stipend is €30,000 and the term is two years. It follows the recommendations of a 10-year review of Laureate na nÓg, and is intended to bring about parity of esteem for the three laureates – and for children’s and adult literature.
#GiveLeabharGaeilge Follow Laureate na nÓg on Twitter @laureatenanog Facebook @childrenslaureateireland