‘People are buying six or seven books at a time’ 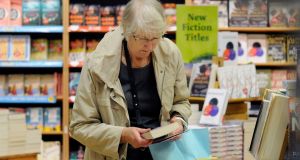 Irish book stores are making a steady comeback in sales following closures from March to June due to the Covid-19 lockdown. Some book shops – particularly in towns and city suburbs – have seen increased local demand for books as customers return to shops following a period of online book buying.

Eason in Dún Laoghaire was the first Eason store to reopen in June. “People are buying six or seven books at a time so in spite of restricted numbers in the shops, we have seen a surge in demand. The footfall is down but the sales are up,” says Colin Hand, manager of the Eason book shop inDún Laoghaire.

Hand says that there was also a huge spike in online sales in September as children returned to school.

Bookshops in Dublin city centre haven’t had the same experience as those in suburbs and regional towns. Liam Donnelly, manager at Hodges Figgis on Dawson St, Dublin, says that there are far fewer customers coming into the shop from Monday to Friday but sales are improving at the weekends. “Those who do come in are spending more. Sales picked up slowly at the start but have become more buoyant in the last six weeks,” he says.

Donnelly also suggests that there is a backlog of books that people didn’t buy online that are now in stock. “There have been several new books by Irish authors – Naoise Dolan, Manchan Mangan, Donal Ryan, John Connolly and Kathleen MacMahon – that are doing very well at the moment,” says Donnelly. As Hodges Figgis doesn’t have a web presence, it has just started a new telephone advice service, Open Ear for customers.

“We have a dedicated number (01-5668878) that readers can call our bookseller who will be able to recommend similar books to the ones they like which should be better than what an algorithm suggest. It’s an alternative to having an Internet presence and we’ll post the books out to customers too,” explains Donnelly.

Tomás Kenny of Kenny’s Bookshop in Galway says that the book trade has changed completely for the store since the pandemic hit. “Our turnover is 75 per cent online but we make a higher margin from the 25 per cent of books sold in the shop. We shipped books to 162 countries in 2019 but An Post told us we could only ship to 16 when the pandemic hit. Overnight our online business was gone,” he explains.

However, as Kenny’s institutional clients (universities and public libraries) from the United States disappeared, Irish customers increased. “People who usually support their local bookshops contacted us online during lockdown instead. We were terrified of reopening the bookshop with social distancing and sanitizing but we’ve been pleasantly surprised. Because we are in a big warehouse with parking outside, people find it easier to come to us,” says Kenny.

He says that during lockdown the demand was for fiction whereas in the last couple of months, there has been higher demand for history books and biographies. “Galway has had quite a busy summer but our sales were down in July because the Film Fleadh and Arts Festival didn’t go ahead. Retail sales were up 2-3 per cent in August from last year’s figures which is remarkable,” says Kenny.