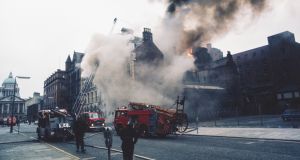 Firefighters battle a blaze after an IRA bomb attack in Belfast in November 1971. Photograph: Leif Skoogfors/Corbis via Getty Images

Every time former firefighter James Fitzpatrick walks into Clarke’s bar in Newry, he lifts his feet “to stop himself walking over the bodies.”

On Christmas Eve 1973, he was among the men called to an explosion in the bar; an IRA bomb had gone off prematurely, killing the two IRA members who had planted it and an 18-year-old who was delivering a message.

“He’s been in that pub over the years, and every time he still lifts his foot subconsciously to step over the bodies, just as he walks in the door,” explains former firefighter John Wilson.

“It’s very often those smaller, telling details that catch people, or that cause them to cry when they recount something. Those are the details that seem to have had a huge weight on people emotionally over the years.”

Fitzpatrick’s story is among those of more than men and women who served in what is now known as the Northern Ireland Fire and Rescue Service which have been collected by Wilson as part of a new book, Firefighters During the Troubles, which aims to shed light on an experience which has been hitherto overlooked.

“We are not the only working professional group that had this sort of experience,” says Wilson, “but we’re just trying to tell our wee bit of it.

“I think because policing is a very highly sensitive and politicised thing, it invariably featured much more in the newspapers or in the public discourse.

“Ourselves and the ambulance crew, we were to an extent more or less invisible. We weren’t literally invisible – there’s plenty of newsreel footage of firemen and ambulance crews – but because nobody bothered with us. We weren’t politically sensitive organisations, so just got on with it.”

Wilson, a retired firefighter who spent 30 years in the service, estimates that several thousand people went through the fire service during the course of the Troubles. “Part of it is about recording their experiences for posterity.”

In so doing, Wilson has been careful to include as broad a range of those experiences as possible; from the centre of Belfast to the Border at Belleek or Newry; from the control room staff to retained and full-time firefighters; from the beginning of the Troubles to more recent atrocities such as the murder of the three Quinn brothers in Ballymoney, Co Antrim, in 1998.

Wilson began his training during the hunger strikes, in 1981; posted to the Central Fire Station, in the middle of Belfast, he recalls how at that time the city centre would have been largely deserted at night. “We stepped out into the street one night because we could hear a sound. It was the bin lids being rattled in the Markets [area], because another person had died.”

He recalls another night being despatched to an explosion in the city centre; within minutes of their arrival another bomb exploded, and then another.

“We thought, you couldn’t be lucky two times in a row, but miraculously nobody was hurt. We used to joke with ourselves that if you were to ask a bookie for odds on us doing 30 years of that and not having more people killed or seriously injured they wouldn’t give you odds.”

“You couldn’t ask anybody to go and do the job we did confident that they were going to survive.”

Remarkably few members of the fire service lost their lives as a result of the Troubles; one, 23-year-old Brian Douglas, was shot by the UDA as he fought a fire in South Belfast, while a small number of others died as a result of explosions.

What did become commonplace was attacks on fire crews; Wilson recalls that “very often when the fire engine turned up it was the only thing that was there because maybe it wasn’t safe for the police.”

Hugh Kennedy, who joined the fire brigade in Derry in 1965, describes in the book the sense of shock the first time a crew was attacked; the crowd had associated them with water cannon which had earlier been used by the police against civil rights marchers.

“We thought of ourselves as just public servants who went out to help people when they needed help, why on earth would anybody want to attack us,” says Wilson.

“The sad reality is that by the time I joined in 1981 you actually expected to get things thrown at you.”

Fire engines were “bricked”, and windscreens had to be reinforced with plastic; some fire engines were so badly pock-marked that they compared them to an advertisement for Tetley tea bags that was on television at the time, “covered in little perforations,” says Wilson.

Yet whatever the risk, he says, “the adrenalin largely sees you through. We would all be watching each other’s backs. You still want to go out and do the job. We would never have sat in the station and thought, ‘we won’t go out’.

Wilson believes that the shared sense of camaraderie helped firefighters cope; with hindsight, he says, they were undoubtedly affected much more than they realised.

“We were very much of our time in this. In the police, ambulance, other professions there wasn’t any great support for anybody, so we were not in any way unique in that we didn’t have the right support in place, and it probably would have been better if we’d had the right support sooner.

“There’s no doubt it had its impacts. How could some of those things not leave a mark?

Yet Wilson describes his time as a firefighter as “a privilege.” Few, he says, would change it: “We wouldn’t want not have been in the service, not to have been part of it.”

TV Guide: 24 of the best TV shows to watch this week
5

Dua Lipa: ‘You have to be made of steel to not let words get to you’
Real news has value SUBSCRIBE