Book review: AD Miller appears to have appropriated Ukraine as exotic backdrop to no great avail 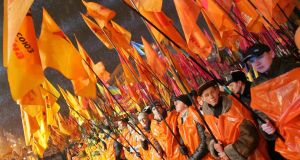 Ukrainian demonstrators at Independence Square in Kiev in 2005: AD Miller has no interest in the events except as fizz for his novel. Photograph: Gleb Garanich

A foreigner gets caught up in intrigue in a land where they speak another language and where there are revolutions, wars, perhaps bombs going off and certainly a lot of corruption. The foreigner can be British or American and usually he is a diplomat, spy or foreign correspondent.

The gold standard is Graham Greene’s The Quiet American, set in 1950s Vietnam. The quiet American in question is a naive but well-intentioned meddler who ends up doing a lot of harm. His choices in his private life are as misguided as his comprehension of geopolitics is limited, and Greene reveals enough about his character and the setting to justify their conjunction in the novel. Putting down The Quiet American, you feel you have been told something true about human beings. But also about the last years of French colonialism in Vietnam and the period of intensifying US involvement.

Independence Square, unfortunately, has no such depth. It is set in Ukraine during the Orange Revolution in 2004, when Kremlin-supported candidate Viktor Yanukovych was poised to take power following a rigged election which had seen the grisly killing of a journalist and the poisoning of opposition candidate Viktor Yushchenko. Protesters in Kiev succeeded in forcing the annulment of the earlier results and Yushchenko became president. Yanukovych returned to power in 2010 and was violently overthrown in the 2014, triggering a war with Russia that simmers on today.

AD Miller covered the Orange Revolution for the Economist magazine but we should not infer anything from Independence Square, because he tells us not to. His author’s note goes beyond the standard proviso about any resemblance between fictional characters and real people being coincidental: “The actions of real-life figures involved in the events have been fictionalised in the novel, too.” We don’t really know what happened behind the scenes in the Orange Revolution: “Independence Square unfolds in the resulting gaps.”

Isn’t it odd to set a book in a real time and place and say at the outset that nothing you are being told is trustworthy? Is it because Ukraine is of no importance except as an exotic locale? Or just because a British author requires a foreign setting, his own country being insufficiently corrupt and violent to provide narrative excitement?

And so, bizarrely, Viktor Yushchenko is never referred to by name; he is “the poisoned candidate”. Yulia Tymoshenko is “the woman with the braid”, Yanokovych is “the bandit” and Petro Poroshenko is “the chocolate tycoon”. As for the rest, we are left to guess what is real and what is thrown in for the sake of the plot.

If plots are what you read novels for, Independence Square might grab you. But this one is about politics, which the author had already signalled he has no interest in except as fizz for his novel. So you may prefer to wait for Independence Square to reach Netflix and get it all over with in 90 minutes.

What novels can do is reveal character. If you cannot work up interest in the plot, Independence Square provides this real consolation and shows that the author has the power to be a real writer. Simon, the British diplomat at the centre of the story, is in trouble with his wife. She’s not very nice to him, following his fling with a colleague in a previous posting. In the course of his misadventures in Kiev, a false rumour about a liaison with an attractive young activist sends Simon’s personal and professional life off the rails. This aspect of Independence Square alone could have been the novel and it could have been set in London. Marriages and lives can go to pieces without the intervention of the Kremlin. But the author’s ambition lay with the political-intrigue genre, and the really human things become secondary to the plot.

So instead we get a lot of damn foreigners! Who speak the simplified portentous English uttered by Tonto in The Lone Ranger, Oriental sages in kung-fu movies and Yoda in The Empire Strikes Back. Here’s a tough-guy oligarch, conveying to Simple Simon how risky it is to do business in a nasty country:

“A man keeps a lion in his apartment. It’s Soviet apartment – small. Circus man. His neighbours say him, take this lion out, lions is dangerous, he will eat you. Man says, lion is my friend, I know this lion, my pet since he is a baby. He feeds his lion, they sleep together. They walk together in their park. You know what happens to him?”

You guessed it! Lion eat man! This is parable, yes?

It’s not Miller’s fault. He knows about Ukraine and knows about people and could tell us a lot about both. But the publishing industry wants novels and plots and movie deals and shortlistings for the Booker and, as with AD Miller’s last book, sales exceeding a quarter of a million copies – so this is what we get.