This daring, ambiguous thriller is an apocalyptic lamentation for a world in free fall 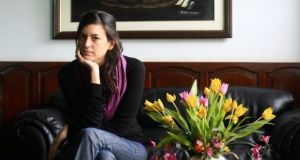 Motherhood appears to have transformed Amanda into a nervous wreck, fearful of the potential dangers threatening her child. Every situation is gauged by an invisible cordon to which she refers as “the rescue distance”, Amanda’s reflex response to any situation. Little Nina is happy, singing as she runs around a well, apparently unaware of her mother’s zealous approach to personal safety. All is well, reasons Amanda, as long as Nina’s activities are contained within that area most accurately described as an arm’s reach – no further.

Given her wariness Amanda seems fundamentally ill-suited to heading off alone with her child for a holiday in the scorching countryside, while her husband remains working in the city.

Yet she does venture forth and before she knows it, is attempting to teach the fraught and glamorous Carla to drive. Her new friend wears a gold bikini and comes complete with a crazy story concerning her son David, who was saved from a fatal illness six years earlier at a huge cost to Carla, never mind anyone else who comes into contact with him.

Already hailed as one of the most exciting Spanish-language writers currently at work, Argentinean Samanta Schweblin shows little mercy for either her characters or her readers in this sophisticated and darkly theatrical debut novel consisting of a death-bed dialogue between Amanda and her demon, David, the rescued child who in having his soul removed from a dying body, appears to have become a modern day variation of Milton’s Lucifer.

Schweblin, sharing the subversive ease of Chilean Roberto Bolano, manipulates ambivalence to terrifying effect in a densely literary nightmare which emerges from the confused, if bewilderingly lucid thoughts, of Amanda as she responds to the cool inquisition of David.

Their conversation takes place in the rural clinic in which victims of toxic agricultural chemicals are treated for sunstroke. She is dying. Only days earlier Amanda had first met Carla, the wife of a horse-breeder whose distrust of their son David has divided the couple.

Schweblin, the author of three short story collections, includes among her various awards the Juan Rulfo Story Prize. Fever Dream echoes the themes of Mexican writer Rulfo’s masterpiece Pedro Paramo (1955), in which a son tracking down his long-absent father arrives in a town in which the inhabitants are dead, only they don’t know it.

Dead animals and deformed children are the prevailing images in Schweblin’s narrative, which also looks to the futuristic vision and brilliantly morbid realism of the great J.G.Ballard. Only Schweblin is not a prophet, she is more of a commentator.

For all the eerie menace of this extraordinary work, which may as easily have been written for the stage, it is as much an eco-polemic as it is a ghost story. Argentina is one of the leading world producers of genetically modified crops which have decimated traditional farming and introduced various health issues.

Fever Dream is about the destruction of the natural environment as well as society itself. The sun is merciless, there is no air; even the simple act of drinking water proves lethal. A mother’s inability to protect her child is also one of the themes.

Written with the urgency of a woman intent on making sense of the chaos around her before she dies, Schweblin’s narrator is powerless if hopeful that her husband may save their child. Translator Megan McDowell is astutely aware of the nuanced tone shifts as Amanda contrasts the recent past with her immediate plight.

Shortlisted for this year’s Man Booker International prize, this daring, ambiguous thriller is an apocalyptic lamentation for our world in free fall, a place in which nothing and no one, not even a child or a horse in a field, are safe.