Everything you always wanted to know about the DUP, but were afraid to ask 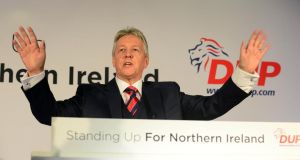 Asked the extent to which “faith and church should influence the party” on a 0 (not at all) to 10 (maximum) scale, members gave a 6.8 score. Would any democratic European party score higher? Party leader and First Minister Peter Robinson scores “faith” at 10, whilst arguing clearly that the DUP should not be the creature of one church. So Richard Dawkins won’t be applying for DUP membership anytime soon. Photograph: Arthur Allison/Pacemaker Press 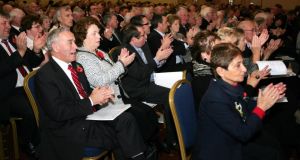 Delegates atttend a DUP conference: for a party once opposed to powersharing, DUP members are fairly enthusiastic about the new political dispensation. As one eyebrow-raiser, a majority believe that the DUP and Sinn Féin are “co-operating well” in the Assembly. Obviously it helps when you are the largest party in that arrangement. Photograph: Eric Luke

It was an unlikely deal, confounding sceptics who said the party of “never, never, never” would not enter a pact with historic enemies. Yet the DUP came to an agreement with academics. The outcome was the first membership survey of a party traditionally suspicious of outsiders. The Democratic Unionist Party: From Protest to Power asks DUP members what they think of that other deal, at St Andrews, in 2006. Perhaps more importantly, it finds out who belongs to the DUP – and why?

The study shows how politicised Protestantism underpins the membership of unionism’s dominant party. Ninety per cent believe there is prejudice against Protestants: 80 per cent attend church regularly; three-quarters do not want abortion legalised; two-thirds believe “homosexuality is wrong”. A majority would prefer their children to attend a school with children of only the same religion; most would “mind a lot” if a close relative was to marry someone of a different religion. Asked the extent to which “faith and church should influence the party” on a 0 (not at all) to 10 (maximum) scale, members gave a 6.8 score. Would any democratic European party score higher? Party leader and First Minister Peter Robinson scores “faith” at 10, whilst arguing clearly that the DUP should not be the creature of one church. Robinson’s private secretary, Paul Girvan MLA, insists that “if you use the Ten Commandments, you can formulate almost every law you need”.

So Richard Dawkins won’t be applying for DUP membership anytime soon. Yet it would be a mistake to assume the DUP is fossilised. The party is changing, but those alterations have yet to fully surface and there is little point looking for spring whilst still in January. The Free Presbyterian Church – whose adherents offer much of the religious militancy – still provides the largest single denomination (31 per cent) of members. This is a remarkable statistic given that the church founded by Ian Paisley forms less than 1 per cent of Northern Ireland’s population. Yet the Free Presbyterian section is in sharp decline. Few have joined in the last two decades and hardly any since the St Andrews Agreement, which caused that church so much soul-searching.

Instead, decidedly non-Free Presbyterian defectors from the Ulster Unionist Party – social liberals in relative terms (although this asks something of the term “relative”) – provided a big influx of members in the turmoil of the post-Good Friday Agreement years. Amounting to one-quarter of the DUP’s current membership, the ex-UUP contingent escaped the chaos of David Trimble’s party in search of strong leadership, party unity, electoral safety (history may be kinder to Trimble than were the electors of Upper Bann) and a better deal for unionists. They got all four. In constitutional terms, what they attained in 2006 was barely different from the supposed “sell-out” of 1998, but this time with important policing issues now nailed (ie Sinn Féin now supporting the police service of the country they co-governed) and the Provisional IRA already gone.

For a party once opposed to powersharing, DUP members are fairly enthusiastic about the new political dispensation. As one eyebrow-raiser, a majority believe that the DUP and Sinn Féin are “co-operating well” in the Assembly. Obviously it helps when you are the largest party in that arrangement. Some old habits die hard. Less than one-quarter of members support the (anodyne) North-South bodies and more than four-fifths believe the Irish Government should have “no say at all” on the North. Notwithstanding the one big win in 2006, only a minority believe that Sinn Féin’s presence on policing boards has been beneficial. Most members believe Northern Ireland’s place in the UK has been secured but only a minority believe lasting peace has been achieved.

Given the dramatic upheaval in electoral fortunes within unionism, could the DUP itself be vulnerable to rapid decline? Given the party’s strengths of a highly active base, support for party policy and considerable brand loyalty, this seems unlikely. But how does it grow? Optimistically, some MLAs believe the party (0.6 per cent Catholic membership – single car needed) can expand by appealing to religiously conservative Catholics. Arguing that the SDLP and Sinn Féin cannot represent such voters, the former Stormont minister Edwin Poots argues “there is an educated, conservative Catholic vote out there which the DUP is probably best placed to pick up”. Yet fishing for religiously conservative Catholics is to cast a line for an improbable catch in increasingly thinly-stocked waters.

The more mainstream DUP view is that, whilst support from Catholic backers of the Union is a welcome bonus, the party needs to maximise appeal across the broadest Unionist spectrum. In a system which institutionalises and manages communal division, episodic sectarian grandstanding is permissible. Given that more than half of the DUP’s elected representatives are members of the Orange Order, further battles over parading rights seem inevitable. A pragmatic wing (one-third of members) supports compromises with nationalist residents as a pre-condition for parades. Communal rallying may be a necessary but insufficient condition for continuing electoral success. It also requires accompaniment by governing competence and progress to win the intra-unionist contest. More women – only 28 per cent of DUP members – might also help.

Many unionists have declined to support any unionist party in recent decades (check the shocking constituency turnout figures) and there is, just possibly, a middle-class electorate looking with mild interest at the newly-modernised UUP, showing some signs of revival under Mike Nesbitt.

Unionist unity may assist both parties in resisting the seemingly inevitable march of Sinn Féin to top party in the North. Four-fifths of the DUP membership wants unionist electoral alliances and a large majority give lower preference votes to UUP candidates.

The benign view of the UUP contrasts with the opprobrium towards the ghost of the DUP past, in the form of the Traditional Unionist Voice under Jim Allister: “There isn’t a positive bone in his body. He was born for opposition,” insists Robinson.

With a close Westminster election looming, the prize of holding the balance of power is a possibility for Robinson’s party. If David Cameron needs to call, that should not present undue problems for the First Minister; half of his party members feel closest to the Conservatives of the main British parties, compared to only one in 14 members backing Ed Miliband’s Labour. From the centre of Clontibret to the heart of Westminster takes nearly three decades by the long route.

Jonathan Tonge is Professor of Politics at the University of Liverpool. The Democratic Unionist Party: From Protest to Power, by Jonathan Tonge, Maire Braniff, Thomas Hennessey, James McAuley and Sophie Whiting, is published by Oxford University Press.