Eileen Battersby: When Anthony Cronin dismissed me as an idiot 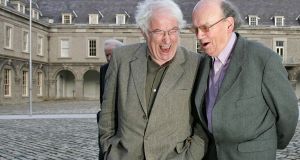 Within about two minutes of first meeting Anthony Cronin, he dismissed me as an idiot for not knowing the whereabouts of McDaid’s public house.

He said it displayed an “unforgivable” ignorance of Dublin’s literary geography. When I said “ouch”, he laughed, exercised his singular smirk, half-boy, half-knowing roué, and replied “at least you have a sense of humour”.

Always good to have one’s sense of humour acknowledged but at a potentially tense moment, and the chance that Cronin would walk away, it seemed wise to press an advantage and I pointed out that Flann O’Brien, the desperately unhappy comic genius about whom Cronin had written a biography, had died on April Fool’s Day, in 1966.

Cronin growled but caught the irony and began telling a great story about how his father started working on the Enniscorthy Echo during Easter Week. “You do know about Easter Week, or don’t you?” challenged Cronin. Reference to my Leaving Cert history prize convinced him it was worth continuing.

Cronin’s father had been unaware of what was going on in Dublin until he discovered that the paper’s entire staff had been arrested as insurgents and despatched to Frongoch internment camp in Wales. Cronin snr decided journalism was not for him and he joined a solicitor’s firm.

“Was it a cup side,” I pressed. “Now, how in hell would you expect me to remember?”

A dangerous pause followed but he softened and said he was far better at tennis. He was also good at history and English. Early in life he discovered a flair for facts. His university years at UCD were also recalled with the wittily jaundiced air he applied to most things.

Now, mere days after his 88 birthday on December 23rd, it is sad to learn of his death. On Christmas Day I shouted down a poor phone line to a friend in New York that his magnificent biography of Beckett is one of the finest Irish books ever written.

The most accurate way of describing a conversation with Cronin was to say it offered equal measures of fun and high tension. My closest link to him? Great racehorses.

He was too intelligent, intellectually arrogant, argumentative – and usually right – tetchy, direct, opinionated, not exactly lovable but likeable and with a genius that was as practical as it was metaphorical. By nature anarchic, he had true candour and was justifiably irritated that he was considered a memoirist and biographer, and, most regrettably, as cultural adviser to Charles Haughey, before he was seen as a poet,which is what Anthony Cronin was a poet who not only wrote fine poetry, but also wrote superb prose.

Cronin’s time at UCD is significant for many reasons. Yet again he seemed to be following the footsteps of Flann O’Brien and in common with him, and also one James Joyce, Cronin failed to win the auditorship of the Literary and Historical Society. Initially he was destined for architecture; not out of any passion. His parents wanted him to have a career. He switched to law and didn’t like it any better. He also took a BA in history and economics.

But most importantly of all, as a disgruntled first-year student he read a great novel, one that would remain one of his life-long favourites; At-Swim-Two-Birds. Small wonder he would in 1989 publish a biography of Brian O’Nolan/Flann O’Brien – a person he admired yet saw as “taciturn, belligerent and bitter”. According to Cronin, O’Brien was not fun to be with.

Of the many qualities Cronin possessed was his superior powers of observation. Had he not been a great writer, he would have been a legendary detective or psychologist. In a couple of sentences he once conjured up O’Brien so vividly it was as if he was standing there before us.

O’Brien was interesting company, yet had no interest in people, told stories, “repeated stories”, anecdotes and rehearsed jokes but made little conversation. In all fairness to Cronin, and to his abiding honesty as a writer, he felt his biography of O’Brien was a failure because no one really knew O’Brien, not even Cronin, who did know him and who always felt he was a better friend to O’Brien than the older writer was to him.

He drifted towards McDaid’s pub and the Dublin literary set that also gathered at the Palace bar and a place called The Pearl. He quickly became an Angry Young Man before playwright Joe Orton invented the milieu.

Through reviewing and freelance journalism, be became involved with The Bell and eventually co-edited the journal with the then editor Peadar O’Donnell. It was Cronin who introduced James Plunkett and Thomas Kinsella. By 1954 Cronin was restless and headed to London, where he was offered the literary editorship of Time and Tide, a publication that had begun to lose its way over editorial stances on capital punishment and the Suez Crisis.

From 1950s Soho, Cronin returned to Dublin, commuted for a while before moving to Spain for three years, where he wrote his fiction debut, a comic novel The Life of Riley (1964). Two years later he published The Question of Modernity, which established him as an international critic. As with many Irish writers he also served his time lecturing in the US at universities in Montana and Iowa. He said he liked the American west, but found the midwest “depressing, too puritanical and too Bible-bashing.”

A master of many forms, Anthony Cronin, the all-seeing witness was primarily a poet, and even the briefest of sketches will reveal that he was a complete and formidable literary man. Most impressively though, unlike many ultra-clever people, his intelligence never overpowered his art.