Don’t Even Think About It – Why Our Brains are Wired to Ignore Climate Change: a manual for a new movement

Review: George Marshall explores the scientific thinking on how we perceive this issue 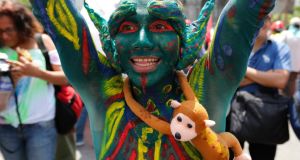 Book Title:
Don't Even Think About It: Why Our Brains Are Wired to Ignore Climate Change

The tide is starting to rise behind a new social movement looking for action on climate change. It could be seen in the 400,000 people who marched in New York on September 21st. There were no big speeches and no top table on the day. Just thousands of banners from church groups, students and unions, and lots of green hearts drawn by people who were there to tell the world they are on a personal mission to act on this issue.

If you were to point to three people among the crowd who deserve credit for getting everyone else there, you would probably pick out Bill McKibben of 350.org, the scientist James Hanson and the author Naomi Klein. All three feature on the dust cover of George Marshall’s latest book. They each acknowledge its importance in setting out what we have been getting wrong in communicating about climate change and how we might start putting it right from here.

This book is no page-turner or populist rant. It is a marketing manual for this new social movement. It is not all geology or meteorology but instead pulls together some of the best scientific thinking on how we perceive this threat in our minds. He argues that we have failed to engage the emotional side of our minds and tries to understand the spiritual and creative stories that could break us out of our guilt ridden, fearful and frozen response.

That failure to win over people’s hearts has seen the tide of popular support for climate action recede over the last seven years. If you look at any survey of what issues people immediately care about, climate will be at the bottom; only there at all because it was put on the list of options to choose between. Not only is there a public silence on the issue, there is even a silence about that silence itself.

The financial crisis and the breakdown of international climate negotiations did not help, but our biggest mistake has been how the issue has been framed in public debate. Marshall does not blame people for that. This is what is known as a ‘wicked problem’. Incredibly complex, contradictory, and constantly changing. You can’t learn about a wicked problem without trying solutions, but every solution creates consequences and new wicked problems.

He argues that we have got it wrong by concentrating on the “tailpipe” emissions rather than looking to directly restrict the source of the problem, which is the fossil fuel extractive industries. The Power of One campaign in Ireland is cited as an example of where the first approach has failed, by putting all the onus on the individual. What we need is not the power of one but the power of all.

Social movements need real targets, and a narrative of opposition needs an opponent, so he understands how McKibben has taken the approach of using the Keystone pipeline decision and fossil-fuel divestment campaigns as a way of gaining some important immediate victories.

However he believes we need bigger co-operation narratives that can bring people together on a common cause. He advises we drop the ecostuff, especially polar bears, and instead relate solutions to climate change to the sources of our own happiness. We should emphasise that action on climate change can make us proud to be who we are.

Marshall recognises that there will be a spectrum of approaches and recommends we keep an open mind and listen to what critics have to say. He interviews leading climate deniers in the US in the course of writing the book. A visit to the Climate Gathering in the Burren College of Art in the spring of 2013 also provided him inspiration. It was organised to consider this question of what new narratives around climate change will work. Everyone there agreed that the deniers have been winning the battle by framing the issue in a way that appeals to certain cultural cues that resonate with large sections of society.

To win people back Marshall believes we could learn something from the world religions. The existing climate change narrative contains no language of forgiveness. It requires people to accept their entire guilt and responsibility with no option for a new beginning. We need to make that beginning through a process of transforming the destructive feelings of guilt, blame and anger into positive emotions such as empathy and reconstruction.

That new beginning is happening and you can see new narratives appear in campaigns across the world. In the UK climate groups have ditched the slogan Stop Climate Chaos and taken up instead a For the Love Of campaign. It is starting to work. Watch this social movement grow.

Eamon Ryan is leader of the Green Party