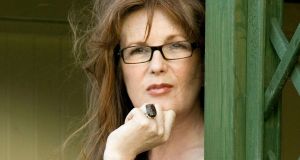 Christine Dwyer Hickey: What makes Tatty a modern classic is how readers from different circumstances will catch something of their own reflection in the restrained dignified tone of its narrator. Photograph: Lorna Fitzsimons

For a novelist no voice is harder to catch than that of a child; no voice is more urgent in its desperation to make itself heard and make sense of the confusing perimeters of its world.

In fiction no voice is more haunting for the reader who yearns to reach out when confronted by a child’s bewilderment and, in real life, no voice is often so easily and tragically overlooked.

A child’s voice can transfix us when steering a novel. It reveals the micro-universe of their family through the prism of a limited, skewed perspective as they strain for a vocabulary to articulate emotional experiences they still lack sufficient maturity to process.

This is especially true for children of heavy drinkers who discover that the personalities and priorities of their parents can abruptly alter during an evening.

They have parents who may not stop loving them and whom they will not stop loving and desperately want to believe in. But their parents can disappear into a mist of alcohol and later re-emerge oblivious to the emotional damage caused to children who are forced to lie awake as inadvertent eavesdroppers on furious late-night rows.

Rows that rage like tornados through rooms downstairs, before they finally abate, leaving only an impenetrable silence in their wake the following morning.

Since its inception in 2006, Dublin’s One City One Book programme has become an important celebration of books that significantly advance our understanding of life in Ireland’s capital. Certain choices seemed obvious in their public intent, like James Plunkett’s great saga, Strumpet City, which chronicled the historically important events of the 1913 lock out.

Christine Dwyer Hickey’s Tatty is an equally important and inspired choice in how it chronicles lives which are not played out within the vortex of moments of seismic change. Instead it contains a child’s mosaic of memories from the hidden life of a troubled family – events that occur within earshot of its narrator who is initially oblivious to their true consequences. Indeed, the novel’s warm humour stems from her unintentionally hilarious misreading of situations.

In the past such familial difficulties were rarely spoken about in Irish society out of a desire to conform to the cult of domestic respectability. This cult of perceived respectability was as pervasive an influence on people’s behaviour as any religious indoctrination in mid-20th century Ireland.

We may have wished to eventually attain the Kingdom of Heaven, but in the meantime our more fervent wish was to keep up the pretence that, if we refused to mention a problem, we could pretend it didn’t exist.

Therefore, Tatty is devastating in its forensic examination of a Dublin family falling apart under the strain of two parents with a deepening dependency on alcohol.

The novel is all the more heartrending for its quiet simplicity of the thoughts of its narrator who – during 10 chapters, each one covering a year in her life – ages from a three-year-old who knows nothing of life to becoming a 13-year-old who knows more than someone her age should need to know.

Her voice subtly alters to mirror her changing perceptions of her disintegrating family and the havoc wrought by alcoholism and depression. Christine Dwyer Hickey brilliantly displays an uncanny ability to allow Tatty’s child-voice to steadily mature with each passing year while remaining true to her quest to grasp what is happening and to let her story, and her family’s story, be heard.

This mission to tell – without seeking permission to tell – is built into the nickname bestowed on her. Her real name is Catherine but just before her fifth birthday, after she innocently tells her mother about the places to which her father took her during a long day’s drinking, her father calls her “a big fat tell-taler”. This nickname is gradually shortened from “tell-tale-tattler” to “Tatty”.

After Tatty’s first publication by New Island in 2004, Joseph O’Connor noted that “along with Hugo Hamilton’s The Speckled People, it inaugurated a radically new way of writing about Irish childhoods”. Each of these classic hybrid novel-memoirs marked a radical shift in tone by their authors, a raw power stemming from the wounded innocence of their bewildered young narrators.

When I first read Tatty it felt that it might not be a case of Christine Dwyer Hickey finding this unique poignant voice as the voice finding her and demanding to be heard. As Hickey said about the initial stages of writing this book: “’I felt the rhythm of it. I heard the little girl’s voice. I wrote a page, then I called my daughter, who was six at the time, and asked her to read it. It sounded grand.’’

That voice contains the unintended humour of a child naively blurting out secrets while trying to conceal them for her parents’ sake, inventing fantasy friends to populate her isolation and spinning outrageous yarns to cover up a creeping shame that stems from a gradual understanding of what sets her family apart.

While terrible things happen in Tatty they are not done by terrible people but by people who find it impossible to conform to the preordained roles Irish society has allotted for them.

Tatty’s parents are unique in their circumstances and eccentric in comparison to straightlaced neighbours. Yet they battle to try and fit into a society where a mother can exhaust herself fighting a losing battle to get an education for her child with intellectual disabilities; where it is taken for granted that men can drink expansively and extravagantly in public while women must drink secretly at home; where depression is an unspoken stigma lurking behind closed curtains on every street in Dublin and family secrets are meant to stay within families.

What makes Tatty a modern classic is how readers from radically different circumstances will catch something of their own reflection in the restrained dignified tone of its narrator, in her need not just to grasp the truth but at times to also tell ludicrous lies to create a parallel imaginative world in which she can try to make sense to her life.

This novel superbly evokes the Dublin of the late 1960s and early 1970s: its streets, pubs, race tracks and bar-room banter; its private homes where class is delineated by whether the front room is called a “living room”, a “parlour” or a “lounge”; its tolerance of male drinking in an era when road safety campaigns urged drivers to skip the fifth pint or – if they had already lost track of how much they had drunk – to only drink two more pints before driving.

Yet few political events of this period impinge upon Tatty’s preoccupations. Instead we see life through the prism of a child who can only focus on those pieces of the jigsaw of the wider world that help her make sense of the dark domestic interior she is trapped within.

As a period piece Tatty would be a stunningly evocative piece of fiction, both poignant and imbued with rich comedy. But tragically Tatty will always remain a contemporary and relevant novel for so long as alcoholism continues to ravage families, with the consequent hurt caused to children caught up in its wake, and for so long as the causes of depression remain not fully acknowledged.

This makes Tatty a novel not only pertinent and significant in Dublin, but in every society where any child lies awake, trying to make sense of angry voices in a room below them, desperate to reconcile the two people whom they love, unable to understand these adult addictions that leave them vulnerable and scared and seeking answers to problems they cannot yet articulate.

Tatty doesn’t mean “tell-taler’’: it means “truth-sayer”. The simplicity of Tatty’s story disarms us with her wounded dignity; her humour and humanity; her ability to forgive, even when confronted by actions beyond her comprehension.

The wounded innocence of her voice leaves behind a haunting echo that readers will not easily forget.

This is the introduction to a new edition of Tatty by Christine Dwyer Hickey published by New Island to coincide with its selection as the Dublin: One City One Book 2020 choice