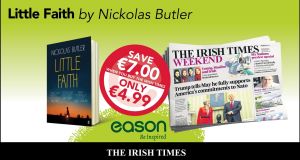 In Saturday’s Irish Times, American Dirt author Jeanine Cummins discusses her new novel and the thorny issue of cultural appropriation with Catherine Conroy in Ticket; and in the Magazine Victoria White goes on an official Elena Ferrante tour of Naples.

Our reviews include John Self on Orwell: A Man of our Times by Richard Bradford; Sinéad Gleeson on Motherwell by Deborah Orr; Christopher Kissane on Food or War by Julian Cribb; Seán Hewitt on Isabel Allende’s A Long Petal of the Sea; Paul D’Alton on Dear Life by Rachel Clarke; Sarah Gilmartin on Djinn Patrol on the Purple Line by Deepa Anappara; Paul Clements on the best new local history books; Declan Hughes on the best new crime fiction; and we also have January’s winning New Irish Writing short story and poem.

Little Faith by Nickolas Butler is this Saturday’s Irish Times Eason offer. When you buy the newspaper at any branch this weekend, you can also buy this acclaimed American novel of faith and family for €4.99, a saving of €7.

Martina Devlin is doing a new monthly book podcast called City of Books for Dublin Unesco City of Literature and Dublin City Council in association with MOLI. The first episode goes up tomorrow: Robert Ballagh on how his reading influences his art. He’s a big fan of Steinbeck and Naomi Klein. Devlin also takes a tour of the James Joyce Tower in Sandycove with Mary Costello, whose brilliant novel The River Capture is inspired by Joyce.

The dlr LexIcon library is celebrating Jennifer Johnston’s 90th birthday with an exhibition on her life and a reception, which will be opened on Saturday, February 25th at 3pm by Roddy Doyle and Lelia Doolan. It is preceded at 2pm by a performance by Geraldine Plunkett of Johnston’s short play Waiting in the Studio Theatre, directed by Caroline Fitzgerald.

The judges of the Comedy Women in Print Prize 2020 have been announced. They are a mix of actors and bestselling authors: Joanna Scanlan, Lolly Adefope, Pauline McLynn, Marian Keyes, Janet Ellis, Yomi Adegoke and Emma Kennedy. A new award category will celebrate the unsung genre of humorous graphic novels.

Irish novelist Colum McCann launches UCC’s Department of English reading series for 2020 on Tuesday, January 28th, in West Wing 5, at 6.30pm. He will be reading from his new novel, Apeirogon. Admission is free and all are welcome.

Brigitte Nielsen on giving birth at 54: ‘I was trying until there were no embryos left’
5