Deep Song: A Lorca biography that leaves us wanting to revisit his poems

Stephen Roberts provides a vision of Lorca as joyous, complex and experimental 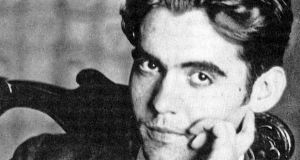 Many of Federico García Lorca’s early poems and prose works were concerned with the self, and have a tortured interiority and a misty connection with landscape. Photograph: Getty Images

In 1922, the Spanish poet Federico García Lorca was involved in the organisation and promotion of a music festival designed to celebrate Gypsy music, and to draw cultural attention to the “authentic” life of Granada. He wrote a lecture as part of the campaign. El cante jondo: Primitivo canto andaluz (Deep Song: Primitive Andalusian Music), suggested that this music was a confluence of the sounds of the natural world and primal human sounds, beginning with a stark cry, and moving towards a sob. Lorca described it as being like “a tear of sound over the river of the voice”.

In this new biography of the poet and playwright, Stephen Roberts draws out this sombre romanticism, and on reading the book it is once again clear why Lorca draws such fanatic admiration. He is a deeply attractive writer: passionate, lyrical, heartfelt, and steeped in an engagement with music, art and the natural world.

Deep Song is rich with Lorca’s words and makes one eager to revisit them. We leave the book yearning to read the poems, to hear more from the unpublished works and, in a more general way, to connect ourselves with the possibilities of a European poetry.

For readers familiar with Lorca’s poetry and the dramatic tragic masterpieces of the 1930s – Blood Wedding (1932), Yerma (1934), The House of Bernada Alba (1936) – the early chapters of this biography will garner much interest. Beginning with Lorca’s earliest extant poem, in which the young poet weaves Shakespeare’s A Midsummer Night’s Dream with the landscape of “his own private Arden”, the wide river plain of La Vega, Roberts journeys through a tender family portrait, quoting Lorca’s early prose work Mi Pueblo (My Village). The children of the family would create their own theatre, putting on puppet plays, and building altars where they would deliver sermons in the style of the local priest.

Behind all this is a depiction of the close relations between Lorca and his mother, his straining towards femininity, but also a recognition of his father’s gentle love:

“I felt all this half-asleep through that stupor one feels in the mornings, and I would often laugh when I saw my father’s face looking at me with love. His mouth would quiver and his eyes were so alive. Back then I would laugh when I saw his gesture. Now I think I would cry. That gesture was one of concern for us, his children of his soul. That quiver in his mouth was a prayer for our happiness.”

As Roberts says, many of Lorca’s early poems and prose works were concerned with the self, and have a tortured interiority and a misty connection with landscape. But there are also these moments of examination of others, and relationships, of building out from the self into the world of others. We see, in these passages from the works, Lorca’s deeply sensitive understanding of human relationships, which would develop into the efflorescence of drama.

Lorca is an intensely mythologised figure, and Roberts is careful not to tell the story of this life in teleological terms, unfolding towards the tragedy of Lorca’s assassination of the hands of nationalist militia. Roberts deals with sexuality, class, religion, and politics, but not in such a way that sees these things as inevitable precursors to Lorca’s later life. Rather, we get a vision of Lorca as joyous, complex and experimental, trying his hand at different forms, obsessions and the possibilities of his art.

There are many biographies of Lorca, and this is a relatively short one. As such it cannot possibily weigh the demands of a thorough historical context against both an artistic development and a strictly biographical development. At times, the conclusions Roberts draws are conjectural in terms of Lorca’s psychology, but that is not to say they do not read as likely true and insightful.

Roberts chooses to read the life through the literature, and this approach has its limitations in that it requires a broader brush-stroke in dealing with wider contexts. But it also leaves Deep Song richly textured with Lorca’s own words, and makes for a flowing, thoroughly enjoyable introduction to the life as a lived and passionate thing.

Music Quiz: Can you solve this Beatles Mathical Mystery?
3

‘There’s nothing to forgive’: Pete Best on being sacked from The Beatles
5