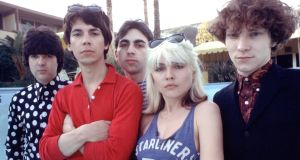 One of last year’s most surprising music books was Coal Black Mornings, the debut memoir of Suede lead singer, Brett Anderson. We knew that Anderson could write an evocative lyric, but didn’t realise how good a prose writer he could be. That book ended with the shutters being pulled down just before Suede’s sizeable commercial success, with Anderson reluctant to be drawn further on his rock star years of excess and despair. Afternoons with the Blinds Drawn (Little, Brown, £18.99) is a suitably disarming yet admirably eloquent follow-up, prefaced by the title of the first chapter: The Book I Said I Wouldn’t Write. Drawing on a more confident approach, the Brit Pop years are explored through a very personal lens; no one gets away lightly from the self-revealing laceration, not least Anderson. “Lost to a vinous blend of chemical experimentation and lurid, ego-driven derangement, I would pad around the flat dressed in nothing but a kind of long, black, gold-braided Moroccan robe… a damaged, paranoid figure, wired and isolated, edgy and obsessed…” He cleans up his act and gets himself together, of course, but not always to the benefit of Suede, which in 2003 he inevitably walks away from. Brittle solo years lay ahead, but there’s nothing of that here. The next book, perhaps?

There will be no next book for UK prog-rock act, Jethro Tull, whose lengthy life story unfolds definitively throughout The Ballad of Jethro Tull, by Ian Anderson (Rocket88 Books, £40). It is an official telling of the band’s history, skewed somewhat by the (always) commandeering hands of founder/leader Anderson. Abundantly illustrated – hence the hefty price tag – it veers from the confessional to the whimsical; the former includes honest intra-group stories of Anderson’s sometimes heavy-handedness towards musicians (his “revolving door” policy meant that 36 musicians have been, at various times, members of the band), the latter via yellowing press cuttings gathered by Anderson’s mother, and a collection known to Anderson only after she died. Woven throughout, however, is a finely wrought oral history, from early days in the late 1960s as unseasoned jazz/blues hopefuls to prog-rock glory days throughout most of the following decade. A lavish book strictly for the fans, perhaps, but it is also something of a UK rock music history lesson for those less invested.

1 Coronavirus: Ireland-Italy rugby match likely to be called off
2 Dublin stabbing: Parking space was at centre of previous rows, gardaí told
3 A cardiac problem that could strike at any time
4 People often ask me why I never want to go back to Ireland
5 Varadkar declines to negotiate with Fianna Fáil on forming government
6 Could Ireland put towns under lockdown if coronavirus arrived?
7 Say no to groupthink: how philosophy can transform learning
8 Bank leaked my loan request to family who tried to rip me off
9 IRFU seek meeting over call to postpone Ireland-Italy match
10 What did it mean to be an Irish teenage girl in the early 1990s?
11 Sinn Féin’s problem with names much more than mere wordplay
12 State would need 16 fighter jets for full air defence capability, expert says
13 Chris Patten ‘amazed’ UK sees common rules with EU as ‘impossible’
14 Charity boss and relative lived in flat for senior citizens, council claims
15 Gerry Thornley: Wild reactions to this Ireland team as fickle as the wind
16 Costa living: ‘Move home to Ireland? I’d hate it’
17 Dublin man may have been stabbed to death by woman in parking space row
18 ‘It affects your nervous system, your brain, your thought process’
19 Turbocharging housing supply may fuel negative equity
20 Coronavirus: ‘I’ve planned a holiday to northern Italy. Should I cancel?’
21 Catholic bishop warns against yoga and mindfulness in schools
22 The sad, secret life of Whitney Houston
23 France reckons with the latest twists and turns in its love affair with the US
24 Why Sinn Féin will not call the State by its name
25 Netflix has revealed its most-watched content. You might be surprised
26 Eason acquires rival Dubray Books for undisclosed sum
27 Some ‘very disappointed’ former FF TDs expected when Seanad nominees decided
28 Fintan O’Toole: If murderous dissidents are wrong, so was Provisional IRA
29 Why did the Vatican not ask any questions about abuser Jean Vanier?
30 ‘Being a man is quite scary’: readers tell us what is hard about being male in 2018
31 Coronavirus: Irish holding back on holiday plans
32 We want to build a separate granny flat. Where do we start?
33 It may be too late to stop Bernie Sanders winning democratic nomination
34 ‘He was angry and punched it about nine times’: Should you recline your airplane seat?
35 Combining aerobics and weights key to avoiding obesity
36 The multiple orgasm: Does it exist and who knows for sure?
37 Irish IT group Ergo foils major ransomware attack
38 My 13-year-old son is watching pornography on his tablet
39 Five Golf Classics for you to tee up at in 2020
40 No more jail time for Willie McAteer over Anglo loan fraud
Real news has value SUBSCRIBE