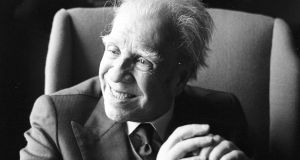 It’s always worth reminding the general public that our time on Earth is much enriched if we devote a bit of it to reading Jorge Luis Borges. Some suspect him of being icily cerebral (story titles like Tlön, Uqbar, Orbis Tertius don’t help), but really Borges is the most fun and most accessible of modernists. And while he might warp or expand time, he’ll never waste it: the short stories in Fictions are masterpieces of condensation. Borges impishly ascribed his preference for the short story to laziness, claiming it was too much bother to set out “in five hundred pages an idea that can be perfectly related orally in five minutes.’ Why not pretend that books – even whole literatures and civilisations - already exist, and provide commentaries on them instead?

Traditionally, short stories offer glimpses into human lives, charting emotional configurations and interpersonal disquiets. With the publication of Fictions, it was as if an alternate literary universe had been discovered in which none of our familiar laws applied. In stories like The Circular Ruins, Three Versions of Judas, and The Garden of Forking Paths, Borges smashed together philosophy, heretical theology, science fiction, detective thrillers, fantasy and hoax in his high-literary supercollider. Dreams within dreams, narrative hypercomplexity, glimpses of infinity: Fictions conjures up a sequence of inadvertent metaphors for the dizzying universe that contemporary physicists were uncovering, as time and space proved spookier than we could have imagined.

The quantum comedy TV series Rick & Morty recently struck me as a vulgar pop cultural echo of the Borgesian Big Bang, with its head-spinning cosmological scenarios unfurled in 20-minute jolts. Wasn’t there even an episode in which Borges turned out to be a precocious teenager from a vastly advanced alien race, who came and revolutionised our primitive earth-literature just for kicks? Maybe not, but it’s easy to see Borges’s influence everywhere – not least because, in the literary century that followed him, it really is. Metafiction, postmodernism, even so-called autofiction: all of them are modulations on the Borgesian superstring. I’m calling it: he was his century’s greatest writer.