David and Goliath, piracy and censorship: the history of Irish publishing 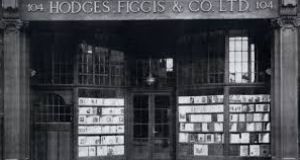 Hodges, Figgis & Co: a famous Dublin bookstore and one of the oldest Irish publishing houses

It would be easy to frame the history of Irish book publishing as a simple tale of David against Goliath, the plucky Irish upstart against the ‘overmighty neighbour’. Yet, as Tony Farmar shows in his new book on the subject, the actual story is far more complex.

Take, for instance, the following anomaly of the introduction of copyright protection for publishers in Britain in 1709. The relevant act was not extended to Ireland, and Irish publishers found themselves in the favourable position of being able to select successful London titles and republish them with no requirement to pay the original author or publisher. This loophole inevitably meant these Irish published books slipped back into the English market, despite the practice being strictly forbidden in 1739. David, despite his size, could be a fine pirate.

As is well known, the Act of Union of 1800 had a devastating effect on nascent Irish industries. In textiles, for example, where Irish business had been thriving, reduced tariffs on British imports and heavy taxes on Irish companies combined to wipe out local production. In Bandon, where there had been 2,000 weavers in 1825, there were fewer than 100 in the 1840s. Irish publishing suffered in much the same way and, when combined with the Copyright Act of 1801 putting “legal” piracy to an end, no Irish publisher could compete with London or Edinburgh. Only devotional and moral tracts were profitable in Ireland, while creative writers, “our men and women of genius”, as the writer and storyteller William Carleton put it, “uniformly carried their talents to the English market”.

By the end of the 19th century, there were important presses which prospered by supplying the expanding universities of the nation. Hodges, Figgis & Co were official booksellers to Trinity College Dublin and the Queen’s Colleges of Cork and Galway. MH Gill, Printer to the University, however, took a daring and ultimately successful step in 1876, giving up university publishing for titles that catered to the growing nationalist-inclined Catholic middle class, whose new wealth was evident in the value of Irish bank deposits doubling between 1890 and 1910 and in the growth of new housing across south Dublin. This same class provided the impetus to revive Irish culture and supported the publishers, like Gill, that were willing to publish works with their interests in mind.

In the rollercoaster boom and bust of publishing, in Ireland and elsewhere, most publishers survived for only a few years. The introduction of fixed book prices in the 1890s created a more stable environment, allowing publishers to dictate to booksellers the price at which their publications were to be sold. This was known as the Net Book Agreement, and it lasted in Britain and Ireland for nearly a century.

During the period 1890-1960, it was not just astute political judgement that would make a successful Irish publisher, it was also their ability to adapt to new technologies. “Disruption” today has become something of an overused buzzword in many sectors. But it does have the merit of conveying something important about patterns of growth in business. Industry leaders in possession of the leading technology become conservative, until a point is reached where a rival can develop a new approach and that leader is undermined.

The adoption of new printing methods, in sudden bursts of change, gave a rhythm of growth, consolidation and collapse to Irish publishing. But those publishers who could navigate well found only more challenges in the form of the censorious atmosphere that followed independence. This environment did not improve – in fact it worsened – with the coming to power of Fianna Fáil. As the manager of Talbot Press wrote in 1932, “no Irish Publishing House could afford to run the slightest risk of having a book placed on the banned list”.

Publishing in the Irish language, which had struggled under the empire, could at least count on a certain amount of State support to make progress.

The opening up of Ireland from the 1960s led to a new generation of readers seeking books and less restrictive censorship, and a new boom came to the Irish publishing industry, a revival journalist John Amstrong in 1970 identified as being headed by Dolmen, Allen Figgis, Sáirséal & Dill, Mercier and Gill & Macmillan. Soon after, a host of others joined the movement as Ireland began to compete with the UK for the production of original works by Irish writers. “They’re producing real books,” said the Guardian, slightly patronisingly, in 1980, “not just reprints.” These new publishing houses included Wolfhound, Academy Press, Blackwater, Blackstaff, Appletree, O’Brien Press, Arlen House, Poolbeg and more. By 1980, there were over 60 members of the Irish Book Publishing Association, known today as Publishing Ireland.

If this were a David and Goliath story, it would be one where Goliath, having apparently been slain by publishers benefiting from Ireland’s escape from empire, stands up again after 2002. For with the growth of multinational publishing and the emergence of massive worldwide conglomerates, what chance do much smaller indigenous publishers stand, especially when Penguin, quickly followed by Hachette, begin publishing in Ireland?

The answer, it turns out, is quite a good chance. Firstly, it isn’t clear that multinationals staffed by experienced Irish publishers and editors are the enemies of Irish publishing. To a great degree, they can be considered part of the success story of recent Irish publishing, especially from the point of view of the Irish author, wanting access to international distribution but not wishing go outside of Ireland to obtain a publisher. There is also a certain amount of elbow room in the world of publishing, where, beneath the headline battle for the bestseller number one spot, there is scope for a plethora of titles with more modest print runs supporting a range of publishers.

“Publishing does lend itself to the small,” Fergal Tobin, former publishing director at Gill & Macmillan has observed. “Even the large houses tend to be broken down into smaller units through their imprints.”

Despite the increased competition and the savage collapse in sales after 2008, those Irish publishers who have come through the recession (and not all did) are currently buoyant and while not all are winding up their slings for a shot at the top spot (although Gill and others certainly are), they are contributing to a new period in the history of Irish publishing that has never been more vibrant.

The History of Irish Book Publishing (The History Press) by Tony Farmar, with a final chapter by Conor Kostick, will be launched by Fergal Tobin, with speeches by author Conor Kostick and Sam Holman, executive directorof the Irish Copyright Licensing Agency at Smock Alley Theatre on Friday, November 16th, at 5pm. Free entry

TV guide: 16 of the best shows to watch this week
Real news has value SUBSCRIBE