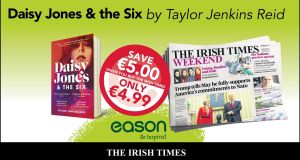 Daisy Jones and the Six by Taylor Jenkins Reid is this weekend’s Irish Times Eason offer. You can buy the bestseller, about a wild Californian singer and a tension-riven 1970s rock band who recount how they united for their best-selling album, for just €4.99, a saving of €5, at any branch with the purchase of a copy of The Irish Times. It has been optioned by Reese Witherspoon’s company for an Amazon series (the novel, not The Irish Times, sadly).

Kennys Bookshop & Art Gallery is celebrating 80 years in business this year. Opened in Galway in 1940 by Des and Maureen Kenny, they have grown and expanded ever since. Kennys.ie was the first business in Ireland to go online in 1994. A full programme of exhibitions runs throughout the year, including sculptor John Behan’s show Migrants, new paintings by Pádraic Reaney, an Old Galway photographic exhibition and an exhibition of European children’s books illustrators – all as part of Galway 2020’s programme. The year will finish with a special exhibition in November, 40 Visual Artists / 40 Writers.

Bloomsbury is to publish Lisa Harding’s second novel, Bright Burning Things, about a failed actress struggling with motherhood and alcoholism. Publishing director Alexis Kirschbaum said: “Lisa Harding is a scorching talent, and in this novel she has crafted a beautiful and artful portrait of a woman at the mercy of addiction, at a time in her life when vulnerability has enormous consequences.”

Harding’s debut, Harvesting (New Island Books), portrayed two young friends caught up in the underground world of sex-trafficking in Dublin. It was nominated for the Newcomer of the Year award at the Irish Book Awards 2017 and a film version is to be directed by Michael Lennox, director of Derry Girls.

This weekend’s book features include my interview in Ticket with Sarah Moss, author of the brilliant Ghost Wall, about her move to Dublin to teach creative writing at UCD. In Weekend Review, Patrick Freyne looks at the controversy surrounding fictional accounts of Auschwitz ahead of the 75th anniversary of the death camp’s liberation. In the Magazine, Roz Purcell talks to Marie-Claire Digby about her cookbook, The No-Fuss Vegan, and Tanya Sweeney talks to Katherine Gray about her latest self-help book, The Unexpected Joy of the Ordinary.

Our reviews are Colin Murphy on Pills, Powder, and Smoke: Inside the Never-ending, Bloody War on Drugs by Anthony Loewenstein; Éilís Ní Dhuibhne on The Boatman and Other Stories by Billy O’Callaghan; Rosaleen McDonagh on All Our Relations by Tanya Talaga; Rabeea Saleem on The Shapeless Unease: A Year of Not Sleeping by Samantha Harvey; Philip Ó Ceallaigh on Sketches of the Criminal World: Further Kolyma Stories by Varlam Shalamov; Paul Clements on Ingenious Ireland by Mary Mulvihill; Dean Jobb on The Clean Body: A Modern History by Peter Ward; John Self on Essays by Lydia Davis; Sarah Gilmartin on Your House Will Pay by Steph Cha; and Seán Hewitt on new poetry collections by Enda Wyley, Mary O’Malley and the late John Montague. Lucy Sweeny Byrne’s Old Favourite is Letters to Monica (2010) by Philip Larkin, edited by Anthony Thwaite.