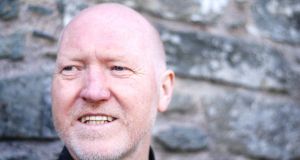 Dave Duggan’s Oak and Stone kicks off as a kind of homage to the quirky black comedy of Colin Bateman.

Opening with the discovery of the body of Todd Anderson, a professional footballer who has been murdered and dumped on the penalty spot of a Derry football stadium, Dave Duggan’s Oak and Stone (Merdog, €14.99) kicks off as a kind of homage to the quirky black comedy of Colin Bateman.

Detective Edmund Slevin is certainly idiosyncratic enough to qualify as a Bateman character: a former Republican (“late version”) prisoner who served 15 years for murder, Slevin has been fast-tracked into the new Police Service North, or PS(N), this despite his specialist credentials amounting to little more than a doctorate in mythology.

A wise-cracking smart-aleck in the Chandleresque style (a man’s suit lapels are “as broad as Shipquay Street and twice as steep”), Slevin’s investigation of Todd Anderson’s murder gradually develops into an existential crisis, “a case with no beginning and no end” in which Slevin eventually decides the chief suspect is himself. By turns lyrical and funny, philosophical and bleak, Oak and Stone reads like a blend of Adrian McKinty and David Peace. Slevin’s ramblings might be “about as useful as a pitchfork in the tide”, as one of his colleagues claims, but they’re hugely entertaining.

The bare bones of the plot make for a fairly conventional jet-setting thriller, but Elliott Kane is an unusually thoughtful spy

Best known for his Nick Belsey thrillers, Oliver Harris introduces a new hardboiled anti-hero in A Shadow Intelligence (Little, Brown, €13.99), which begins with MI6 agent Elliott Kane fleeing Saudi Arabia in the wake of a botched operation. A cry for help from the Dark Web prompts Kane to go rogue and fly to Kazakhstan, where he is soon entangled with competing “shadow intelligence agencies”, privately funded armies staffed by ex-spooks who offer “strategic advice and analysis for leaders operating in complex environments”.

The bare bones of the plot make for a fairly conventional jet-setting thriller, but Elliott Kane is an unusually thoughtful spy. “The world cannot all be real at the same time,” he says as he tries to square his post-operative self with the identity he has recently shed.

“I felt the tingle again,” he tells us later, touching down in Astana, “entering a country as a spy, your own mystery momentarily equal to the world’s.” As much a thinker as a doer, Kane has much in common with John le Carré’s Jerry Westerby, or Lionel Davidson’s Johnny Porter, a plausibly multi-faceted old school operator with the skills – physical, psychological, intellectual – to negotiate the geopolitical faultlines of Central Asia as Russia and China square up over Kazakhstan’s untapped oil reserves.

Insomnia plagues Anna Willis in C.L. Taylor’s psychological thriller Sleep (Avon, €17.99). Believing herself responsible for the deaths of two work colleagues in a car crash, Anna leaves London behind and takes a job as assistant hotel manager on the tiny Orkney island of Rum.

The result is a pacy and entertainingly improbable romp

Already guilt-ridden, Anna’s life becomes considerably more complicated when she realises that one of the seven guests recently arrived at the hotel wants Anna to kill herself . . A potentially intriguing variation on Agatha Christie’s And Then There Were None, Sleep abounds in red herrings, albeit many of them are the result of rampant paranoia caused by Anna’s suffering the disorientating effects of insomnia fuelled by guilt.

The result is a pacy and entertainingly improbable romp which is only slightly undermined by the niggling query as to why Anna, believing her life in danger, doesn’t simply lock herself in her hotel room and barricade the door.

Set in Pericles’ Athens, JM Alvey’s Shadow of Athens (Orion, €12.99) features the amateur sleuth Philocles, who is reluctantly obliged to investigate a murder – this to placate the Furies, and uphold the city’s honour – when a dead body is dumped outside his door.

The dead man, Xandyberis, hails from Ionia and is visiting Athens during the Dionysia, which is taking place against a backdrop of political intrigue as various members of the Delian League jockey for supremacy. It’s this latter aspect of the story that makes Shadow of Athens such a fabulous read.

Philocles is a playwright, albeit a self-confessed humble “comedy scribbler” as opposed to the more respected tragedians, and JM Alvey makes full use of his potential, not least in terms of how Athens’ wealthy patrons exploit its artists and playwrights to advance their own agendas in the ancient Greek equivalent of “soft power”.

The historical detail is superb, especially Alvey’s nuanced understanding of the subtle gradations of Athens society, and the gripping mystery, narrated by Philocles, frequently delivers the kind of nuggets of subversive humour to be expected from an underappreciated comedy scribbler who is obliged to toe his patron’s party line.

It’s a simple but brilliantly effective set-up, a kind of neo-Western set in a lawless world

Peter Heller’s The River (W&N, €16.99) opens with Dartmouth buddies Jack and Wynn canoeing in leisurely fashion down the Maskwa River toward Hudson Bay, only to discover that an immense forest fire is bearing down on them from behind. Shortly afterwards, the boys discover a woman badly beaten and unconscious in the woods. Was she mauled by a bear, or was her partner responsible, and if it’s the latter, are they now in danger themselves? It’s a simple but brilliantly effective set-up, a kind of neo-Western set in a lawless world, although Peter Heller, having established the tension that drives this compulsive thriller, makes time to lyrically explore the natural landscape: “The last light slid down to the edges and slipped onto the silvered lake which bore it without a ruffle.”

Heller rather overdoes the literary references – along with Huckleberry Finn and Heart of Darkness we get Poe, Dante, Frost and, well, Louis L’Amour – but for the most part The River is an inventive rites-of-passage tale and a haunting exploration of grace under pressure.

Declan Burke is an author and journalist. He is the editor of Trouble is Our Business (New Island).