Taking its cue from Hitchcock’s ‘Rear Window’, as well as a host of noir classics, ‘The Woman in the Window’ offers a clever variation on the unreliable narrator 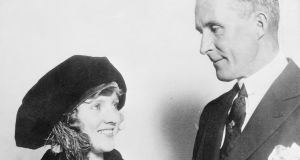 Opening in Hollywood in 1922, Gerard O’Donovan’s ‘The Long Silence’ is a mystery centring on the death of Irish film director William Taylor, seen above with Mary Miles Minter, diminutive screen star whose love notes to Taylor caused a sensation when they were found.

An agoraphobic confined to her Harlem apartment, Anna Fox obsessively watches her neighbours in AJ Finn’s debut The Woman in the Window (HarperCollins, €15.99).

Formerly a child psychologist, Anna self-medicates with too many pills and far too much wine. When she hears a scream from the apartment across the way, and sees her new neighbour, Jane Russell, stagger into view with a knife stuck in her chest, Anna is convinced she has witnessed a murder. When the police investigate, however, they introduce Anna to Alistair Russell and his wife, Jane – a woman Anna has never seen before. Is Anna hallucinating? Or is something more sinister going on in the Russell home?

Taking its cue from Hitchcock’s Rear Window, as well as a host of noir classics, The Woman in the Window offers a clever variation on the unreliable narrator. Anna Fox is intelligent and resourceful, but the first-person intensity of the narrative’s diary format grows increasingly claustrophobic as the story unfolds. Fans of the psychological thriller will likely spot a couple of the big twists before they are revealed, but this is a hugely entertaining tale of cat-and-mouse that is steeped in the genre.

E Lockhart’s Genuine Fraud (Hot Key Books, €16.90) opens in Cabo San Lucas, Mexico, where Jule is living an aimless, decadent existence at an upmarket hotel. When a friendly stranger starts asking too many questions, Jule realises it’s time to move on – but is it ever possible to outrun your past? The question is a pertinent one in relation to Genuine Fraud, the story of which unfolds in reverse, with each successive chapter taking us a step further into Jule’s recent past via her turbulent relationship with the mysteriously disappeared Imogen.

Imogen’s fate will come as no surprise to fans of Patricia Highsmith, especially as Lockhart specifically credits The Talented Mr Ripley as an influence, although in essentially rewriting crucial scenarios from that novel, Lockhart blurs the line between homage and pastiche. The antithesis of “the great white hetero action hero” she repeatedly mocks, Jule is no slouch herself when it comes to slickly dispatching anyone who threatens to stand in her way of self-gratification, a bad-ass anti-hero who believes her life cinematic. A narcissistic, manipulative and homicidal sociopath, Jule is a thrilling guilty pleasure, albeit one prone to needy self-aggrandising.

William Desmond Taylor’s murder remains unsolved to this day, but O’Donovan doesn’t set out to write a fictionalised true crime novel; The Long Silence is a densely plotted odyssey through the mean streets and dark alleyways of Prohibition-era Los Angeles that pays homage, with its neon-lit rainy streets and teeming cast of lowlifes, gangsters and Hollywood wannabes, to Raymond Chandler and Dashiell Hammett, albeit in a brisk, functional style somewhere between the bruised poetry of the former and the pared-down minimalism of the latter. Adolph Zukor, Douglas Fairbanks Jnr. and Gloria Swanson are just some of the historical figures who play bit parts in Tom Collins’ investigation, which delivers an atmospheric and cynical take on Hollywood realpolitik in the silent era.

Laura Pierce sets out for the South of France at the beginning of Susan Stairs’ One Good Reason (Hachette Books Ireland, €15.99), determined to confront artist Paddy Skellion, the father of Tory Skellion, a young man acquitted of taking part in a home invasion which caused Laura’s father to suffer a fatal heart-attack. Laura plans to subject Paddy Skellion to a rough form of natural justice, but her scheme quickly goes awry.

On the face of it a revenge thriller, One Good Reason is refreshingly pragmatic in the way it addresses the corrosive effects of hatred and the impossible fantasy of revenge; it also delivers a sobering critique of the law’s limitations and a fascinating exploration of the psychological consequences of taking the law into one’s own hands. The plot isn’t always entirely plausible, but One Good Reason is a thrilling account of how the absence of justice can transform raw grief into a potentially lethal obsession.

The narrator of Leo Benedictus’ Consent (Faber, €15.99) is a logical, erudite and “uncomplicated person” who tries “to live by simple principles with doggedness and honesty, and with an open mind”. Fair enough, until you realise that he’s applying said principles to “studying people” – or, to be precise, stalking. Benign to begin with – one of his principles is to never engage with “the subject” – the stalking becomes increasingly creepy as our narrator grows obsessed with Frances, and begins writing a novel told from Frances’ point of view, a novel that includes our narrator as one of its main characters.

The narrator’s pompous self-importance and overly florid language bring to mind John Banville’s Freddie Montgomery or Dostoevsky’s Raskalnikov, but behind all the self-serving sermonising Benedictus is having fun with the genre’s tropes, at one point assuring the reader that his “moral duty, if I have one, is to get away with what I’m doing”. By turns whimsical and bone-chillingly explicit, Consent is a gripping reimagining of one of the crime genre’s most tired tropes: “I wonder if you’ll see a monster,” the narrator asks of the reader, “and if I am one, or if monstrosity is a costume to be tried on.”

Declan Burke is an author and journalist. He is currently a Dublin City Council / Unesco writer-in-residence