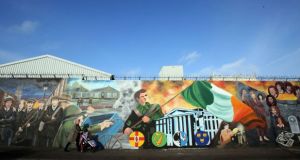 There is another character in O’Doherty’s book, the city itself. Belfast has changed over time. Photograph: Paul Faith/AFP/Getty

Terry Brankin has killed before and he will kill again.

How do I know? I invented him.

This isn’t usually what journalists do. In fact, it is very specifically what they ought not to do, make things up. And yet I have a strong sense that writing a novel was a natural step to take. Lots of journalists write novels, which makes us suspect that the medium of short-form reportage never fully satisfies them.

I have tried to weave a yarn that echoes a lot of truths, draws on much that I have written about before but which is fiction from beginning to end. I have tried to recreate how Belfast felt at times in my life and record something of how it has changed.

There is nothing newsworthy about student nurses sunning themselves on a doorstep in May yet that might be for me an image as evocative as the crash of a petrol bomb on tarmac. Both were the backdrop to great drama.

The novel is set in post-peace process Belfast, referring back to the Troubles period and a shocking bomb attack. In the present, Terry Brankin, now a solicitor and a property developer on the side, is to be called to account for that bombing. He has a nice home. His wife is in a book group. Who’d have thought that murder underpinned it all and murder would sustain it?

Long out of the IRA, Brankin faces a series of challenges from the police who know his past, from the IRA who want to be sure he keeps his mouth shut, from other destructive forces he cannot yet identify and even from his wife, who thinks that since he’d only do two years anyway, the decent thing would be to come clean.

And under these pressures, and as his problems and dangers are compounded, the soldier in him re-emerges, the hard man and the strategist.

But why make things up when the reality is fascinating and much of the detail is accessible?

There has been wonderful journalism of the Troubles. We have seen through inquests and court reports numerous personal profiles of people who killed or were killed. We have masses of interview material with victims’ families.

We don’t have to stretch our imaginations much beyond what journalism already provides to describe and represent the attitudes and thinking of a terrorist or a police officer or a moralistic, evangelical peeler. All that material is knowable.

We even have the statements of people shot dead as informers, the confessions of supergrasses. Read that material and you will feel as if you have eavesdropped on the worst among us.

And there is a huge body of material that has come out of the prisons. But journalism takes all of this and focuses tightly on bits of it. It doesn’t comprehend the whole. The historian can come later and patch it all together. But often the academics are overly cautious. They want to package what they can be sure of and stifle the rest with qualifications.

What a novelist wants to do is break out of the strictures of reportage and analysis and academic appraisal and imagine real people doing foul and sometimes heroic things. One publisher rejected this book because she thought no reader could ever empathise with Terry Brankin because he had killed a child. I said reporters in Belfast and Derry deal with Terry Brankins routinely.

journalism and literature have kept their distance from each other

The entire political system in Northern Ireland is predicated on the idea that people who have murdered or tried to and never apologised can still run government departments responsibly.

In our contacts books we journalists have the names of former paramilitary killers. We see old gunmen and bombers now in suits at Stormont and appear to have little difficulty matching the past horror to familiar geniality. Even the academic now sits down with people who have killed and interviews them about the past. The record can’t be complete without their part in it.

The step beyond journalism and judgment is to try to empathise across the range, not just with the victim but with the killer too and his wife and the cop who wants to nail him, to think for a time like that man who has killed a child and can put that out of his mind. And I think that step is the natural next one for a journalist to take.

There is another character in the book, the city itself. Belfast has changed over time.

Journalism doesn’t set up parallel time zones and walk you through both of them. The historian describing Belfast in the 1980s will give you the economic conditions, the social forces and how they are balanced but can’t take you down the Ormeau Road on a summer’s day and replicate that mix of sensual delight and the edge of of tension that was always there too.

Terry Brankin Has A Gun has characters who argue about the worth of the IRA campaign, about the inevitability or otherwise of violence, and as the writer creating those characters I am on both sides of each argument.

I am with the hood at his first kneecapping and with the gunman too.

I have written other books about the past, memoir and nonfiction, and I don’t decry the power of those forms to shake us awake or to restore accounts that run counter to propaganda and simplifications.

But there are parts of experience that have to be guessed at, gaps in the stories people will tell you that have to be filled in by imagination. And that is where what we call “fiction” comes in and makes an effort to be even more true.

Journalism prizes the idea of objectivity but in fiction the writer becomes almost godlike, entering into the hearts of characters who are viciously at odds with each other and interested in all of them as people.

This is something I have long wanted to do. This is not to say that as a journalist I was a failed novelist settling for a poor alternative. I have journalism in my bones but I think only a journalist could have written this book.

Yet journalism and literature have kept their distance from each other.

My first news editor on the Sunday News saw it as a prime responsibility of his to knock any floweriness or what he called “literary pretension” out of my style. The story is still told, I’m afraid, of copy that I handed up one day that opened by citing a couplet from Yeats.

Yet, that same news editor taught me some writing tricks that I value still. He showed me that overstating something had the paradoxical effect of understating it. He taught me to write clean, tight lines that said what they intended to say. He did it with a gruff and scathing manner, “say it and be done with it; it’s tomorrow’s chip paper”. The job of the language was not to be noticed.

The story is like a game board and so long as the stories played out resolve at the end there is little or no need to care much about who lives or dies along the way. I have the IRA man who put it all behind him and the one who still moves in shadows and kills.

I have the principled, Christian cop frustrated with bureaucracy and the affable desk sergeant, even the clumsy new recruit. I have the Belfast Holyland area, the young there today indulging identity and the young there 30 years ago who managed to pretend the Troubles weren’t even happening.

The book is therefore a statement about complexity and change, an attempt at an organic representation of a city with recent memories of carnage and chaos and I can say all that in journalism but I felt I needed to write a novel to bring it alive.