Bullying, surveillance and exile: a childhood in Ceausescu’s Romania 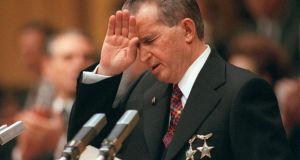 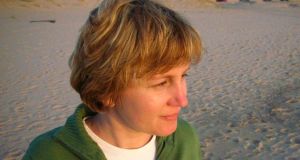 Author Carmen Bugan: ‘My father expected to be welcomed as this great political hero. I think, in his mind, he was a sort of Mandela’

On the morning of March 10th, 1983, a provincial grocer by the name of Ion Bugan put on his best suit, got into his red Dacia and drove to Bucharest. He stopped on a rush-hour street and covered his car with hand-painted banners protesting against the lack of food – and freedom of speech – in Ceausescu’s Romania.

That afternoon, Ion’s 12-year-old daughter Carmen came home from school to find the secret police in her living room. Her mother, Mioara, who had recently given birth, was in hospital with the baby; her sister was away, studying to be a gymnast.

It was left to Carmen and her elderly grandmother to hold the fort as the Securitate “confiscated” all their food, tore up their garden, installed microphones everywhere and – having obtained a set of keys to the house – came and went as they pleased at all hours of the day and night.

There follows a tale of mind-boggling psychological cruelty, which Carmen Bugan recounts in her memoir, Burying the Typewriter. During the four years of her father’s imprisonment, the family was repeatedly told that he was dead. Her mother was forced to divorce him.

At school, the other kids were taught to throw stones at Carmen because she was “the daughter of a criminal”.

Bugan, a published poet, can with a single sentence paint a portrait of almost visceral immediacy. In conversation, what is most striking is her warmth, humour and complete lack of bitterness; qualities that will, no doubt, be evident when she is a guest at the West Cork Literary Festival in Bantry this month.

Was it not traumatic, revisiting her teenage years to write a memoir? “It was quite difficult,” she says, “but then at the same time there is also the emotion of nostalgia. There were a lot of great memories as a little girl with my grandparents. And like every person in the world, I wanted to recapture that time.”

The early chapters of Burying the Typewriter present an idyllic pastoral lifestyle that is surely as alien to the experience of many urban western readers as the activities of the Romanian secret police.

Bugan laughs. “My children see chicken coming into the house all wrapped up, and they think that killing a chicken to eat it is really violent,” she says. “But even now, in the more isolated places in Romania, the old ways are still the ways. There’s still the sense that you live and eat off the land.”

Bugan’s description of childhood holidays at the seaside are among the book’s most vivid passages. She recalls the arrival of the family’s first tent, a complicated yellow structure with a brown floor.

“We took it to the Black Sea and it made us feel like we were going to the moon,” she says. “From such a poor village, where you sensed the oppression around you, suddenly you can go and sleep in a tent somewhere with the waves, with the sand, and mum was cooking on the beach.”

In other respects, Bugan family life was anything but ordinary. One photograph shows Carmen’s brother Catalin in hospital in Bucharest, standing in a cot whose bars are rusty enough to produce a shudder. And rusty cots were the least of the horrors.

“There was a woman who took her baby daughter into the hospital to pretend that she was my mother’s friend in order to give daily reports on my mother,” she says.

The reports contain chilling sentences, such as the detail that Mioara Bugan fainted after one conversation and had to be revived by the nurses.

“I started to write a short story about it because I’m still trying to deal with it,” her daughter says. “The doctor in charge of the hospital at that time said there were 20 beds for 47 women. So the women had to take turns sleeping in the beds, all of them with very sick children. So for you as a healthy human being, with a healthy baby, to go out on this mission, it’s really shocking for me.”

Even as a child, Bugan knew that what her father was doing was dangerous, not just for himself but for the whole family. Ion Bugan’s protest wasn’t just a one-off; he had been imprisoned in his 20s. Part of the power of Burying the Typewriter arises from his daughter’s honesty in expressing her anger at, as well as pride in, her father’s rebellion.

After the memoir was published, Carmen was finally given access to the thousands of surveillance files the Securitate kept on her family.

“The deeper I read these files – and I have to translate them from Romanian – the more shocking it is how composed and how calm the people were,” she says, “as if they were just going to a normal job. It’s really unbelievable. I still haven’t managed to talk to any of them. I wouldn’t want to face any of those people and I wouldn’t want to put them on trial. That’s not what my work is about. I’m just simply saying, ‘This is how we lived then’.”

At the age of 18, she sought asylum at the US embassy in Bucharest. Her family was given refugee status and emigrated to the US, where they arrived in Grand Rapids, Michigan, with just two words of English: “Ceausescu” and “prison”.

They also had a very skewed notion of American democracy, gleaned from years of listening to CIA radio broadcasts.

“My father expected to be welcomed as this great political hero,” she says. “I think, in his mind, he was a sort of Mandela, you know, after all those years of prison and house arrest, but people didn’t know who we were.”

How did it turn out? “It turned out great. It was also very hard. It was the life of immigrants. We cleaned in a nursing home. We worked at Burger King. My father cleaned in a church until he retired.”

All three Bugan children went to university, something they could never have aspired to in Romania. Then Carmen spent a year at the Poets’ House in Falcarragh, Co Donegal, studying with the Northern Irish poet James Simmons.

She is currently finishing her doctorate under the supervision of Bernard O’Donoghue at Oxford.

If Bugan’s memoir is transformative, her poetry is downright alchemical, transmuting the deprivations of her family’s life experiences into dreamy gold. Her collection The House of Straw is a song of celebration and love.

“It’s good to have two mediums,” she says. “I must say I feel very, very lucky. It’s also fun. It’s very tiring to deal with these Securitate documents. I’ve become a very crabby person in the last couple of years. But it’s immensely . . . it’s like . . . I don’t know – a prayer, or a beautiful way of getting rid of the bad memories and putting them in a context to which other people can relate.”

Carmen Bugan will take part in Seamus Heaney: A Celebration with Ben Okri, Maurice Riordan and Nick Laird at the Maritime Hotel in Bantry on July 7 at 5pm. On July 8 she will be the guest for coffee and chat at Bantry House Tearooms at 10am and will give a reading at Bantry Library at 1pm.