Brief reviews of A Luminous Republic by Andrés Barba; The Midnight Library by Matt Haig; The Death of Vivek Oji by Akwaeke Emezi; Act of Grace by Anna Krien; Building the Irish Courthouse and Prison by Richard Butler; How to Lose the Information Warby Nina Jankowicz 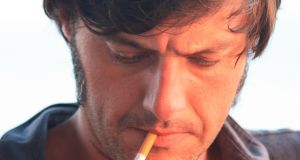 A Luminous Republic
By Andrés Barba
Translated by Lisa Dillman
Granta, £12.99
A civil servant relocates to the Venezuelan city of San Cristóbal with his wife and her daughter, keen to begin a new life in the shadow of the rainforest. But their arrival coincides with the appearance of groups of strange children and dark omens, as the local community succumbs to fear in the face of violence and intimidation. This is Andrés Barba’s 12th novel and it reads like a sinister fairy tale, resonating with the power of an ancient myth, a darkness looming behind the exquisitely translated prose. At its core is a profoundly moving tale of memory and grief, while themes that are terrifyingly relevant revolve around it; what communities do in the midst of fear, how quickly survival trumps morality and how language has the capacity to trap us as well as set us free. Becky Long

The Midnight Library
By Matt Haig
Canongate, £16.99
“Regrets, I’ve had a few”, sang the legendary Frank Sinatra. The not-so-legendary Nora Seed has more than a few regrets. So many, in fact, Nora decides she can no longer engage in living. Our protagonist is surprised then to find herself in the Midnight Library; a space between life and death, where she is offered the opportunity to redress her regrets, and re-live her life by making different choices. Like much of Haig’s writing, the book adeptly addresses issues of mental health, though it does at times sway into the sentimental. Overall, the heart of the book contains a hopeful message; there are many ways to live a life, but the most important is that you can say “I did it my way”! Brigid O’Dea

The Death of Vivek Oji
By Akwaeke Emezi
Faber & Faber, £12.99
Life in Ngwa, Nigeria becomes precarious when Vivek arrives home with long hair which he refuses to cut. He could be mistaken for a woman. Mother, aunt, cousin and friends all weave their stories through the chronicle of Vivek’s life and death, each of them attempting to understand the societal rules they are challenging. Under Emezi’s deft and critically-acclaimed pen, characters confront fear in the face of the unknown, love in the wake of the known and experience moments of pure, lacquered life that rise up from the page and lodge in the heart. With a message that is urgent and always eloquently delivered, this book is a paean to the girl in the blue cotton dress that will leave readers that bit wiser and more empathetic. Mia Colleran

Act of Grace
By Anna Krien
Serpent’s Tail, £14.99
An Act of Grace inhabits four distinct times and places that on their own would be intriguing enough for an entire novel: Australian soldier Toohey returns from the Iraq War in 2003, splintered in his mind and body, riddled with anger and fear; 10 years earlier, pianist Nasim flees terror and abuse during Saddam Hussein’s regime, seeking asylum; in Melbourne at the turn of the millennium Robbie’s father develops early dementia, while her own feelings and impulses grow incomprehensible. Fast forward to the present day, and the lives of these characters intertwine. This book encompasses several rich inner landscapes and vivid exterior worlds in writing which is deft and affecting. It raises questions about trauma and its legacy, examining awful acts of cruelty and powerful moments of friendship: keenly researched and deeply observed. Ruth McKee

Building the Irish Courthouse and Prison: A political history, 1750-1850
By Richard Butler
Cork University Press, €39
In his fascinating new book, Richard Butler tells the origins story of the county courthouses and the prisons built in Ireland between 1750 and 1850. This was the period in which these institutions, at least in their modern forms, were established. In a feat of historical and architectural detective work, Butler explains how and why these were erected, who commissioned and paid for them, how theories and designs evolved, and how plans and sites were chosen. Along the way, he introduces us to a cast of surveyors and architects, lobbyists and inspectors, politicians and judges. The book is lavishly illustrated with photographs, maps, plans, architectural drawings, paintings, tables and charts. These illustrations are not for show, but have been chosen and organised to make Butler’s arguments visible and so more accessible. William Murphy

How to Lose the Information War
By Nina Jankowicz
IB Tauris, £20
Nina Jankowicz has made a special study of what makes societies vulnerable to the spread of Russian interference. Her expertise is based on her having advised five central and eastern European governments on the front lines of the information war and she uses these as case studies to show how and where Russia interfered and how these countries fought back. Her warning is stark: Russia’s greatest successes haven’t been in misinformation/disinformation but in “narratives grounded in truth that exploit pre-existing divisions in societies”, divisions such as US race relations, UK economic disparity and the immigration crisis in Europe. Her suggested tactics to help win the information war are thought provoking; it’s a complex and difficult path forward but one vital to preserve democracy and truth itself. Brian Maye