Brought to Book: Sheila Agnew on Middlemarch’s wisdom and the title that brought her home 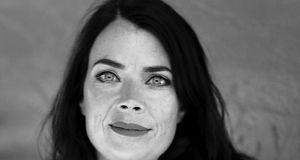 Sheila Agnew: I can’t write fiction at a desk. Whenever I try to do so, all creative thought abandons me

Sheila Agnew’s first book for children (aged 9+), Evie Brooks is Marooned in Manhattan, was published in Ireland and Britain in March. The second book in the series, Evie Brooks in Central Park Showdown, will be published in September. She will be speaking at the Children’s Books Ireland conference The F Word: Failure on Saturday and Sunday, May 24th and 25th, at the Lighthouse Cinema, Smithfield, Dulbin, See childrensbooksireland.ie for booking.

Danny, the Champion of the World by Roald Dahl.

I am David by Anne Holm.

The Absolutely True Diary of a Part-Time Indian by Sherman Alexie and King Leopold’s Ghost by Adam Hochschild.

“If you have a garden and a library, you have everything you need.” Marcus Tullius Cicero.

Atticus Finch in To Kill a Mockingbird.

A few years ago I spent about six or seven weeks in an isolated cabin in the woods in the Berkshires. I ran out of books and I didn’t have a car or the patience to wait for an Amazon delivery. With a feeling bordering on horror, I downloaded my first ebooks. Now I prefer them.

I have a battered, torn, stained copy of Reach for the Sky that I’ve owned since I was 10 or 11 years old. I don’t think it’s well written but the story of Douglas Bader’s life, his courage and his resilience, has always inspired me.

I usually write sitting in an armchair or in bed with my laptop propped up on my knees. I can’t write fiction at a desk. Whenever I try to do so, all creative thought abandons me. When I start a novel, I know how it begins and I know how it ends. But I’ve no idea how I am going to get from start to finish. I make that up as I go along.

Every novel I read changes the way I think about fiction.

I did years of research for my first novel, which was about a group of female prisoners in Northern Ireland in 1981.

It was The Snow Geese by William Fiennes. I had lived away from Ireland for 15 years. That book inspired me to go home.

When I turned 18, my older brother gave me a copy of Hard Times by Charles Dickens, which was a bit of a joke. I think I’d give a friend’s child, Great Expectations.

I read Middlemarch by George Eliot for the first time last year. When I was a teenager, my perception of romantic relationships was largely based on Pride and Prejudice with a dash of The Stranger. That was definitely not an advantage. In Middlemarch, George Eliot describes the reality of relationships with extraordinary accuracy. But if I’d read it when I was 18, I might not have recognised the truth of what she was saying!

I’d advise aspiring authors to avoid getting stuck with preconceived notions of what kind of writer they want to be. I think that it helps to keep an open mind and to experiment with writing in different genres and forms.

I enjoy reading good reviews but I don’t re-read them or get carried away. I feel that I’ve been prepared to handle any bad reviews that come my way courtesy of a much wiser woman than me, the author Iris Murdoch. She said that “[A] bad review is even less important than whether it is raining in Patagonia.”

I see it continuing to evolve but I don’t see it disappearing. There’s a satisfaction to be found in reading not available elsewhere. I visited about 40 schools in Ireland over the past couple of months and I found that the kids are just as interested in reading as I had been as a child.

I never take any notice of trends.

I’ve learned how predictable human behaviour can be.

It has taught me about how much stuff I can cheerfully live without. My current income is a minuscule fraction of what it was when I was a junior litigation partner in a midtown Manhattan law firm. But now, I sleep very soundly without demons in the night.

I think it was in The Canterville Ghost by Oscar Wilde when the American offers the ghost a tube of lubricant to grease his chains because the clanking noise is keeping his family awake.

My favourite words are thank you. It is impossible to overuse those words so long as you mean them.

I plan to write a historical Young Adult novel about an Irish teenager caught up in Argentina’s dirty war, which took place between 1976 and 1983.