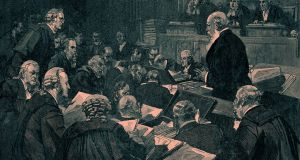 Richard Pigott under cross-examination at the Parnell Commission, 1889, over allegations he made linking Charles Stewart Parnell to the Phoenix Park Murders in 1882. Photograph: Culture Club/Getty Images 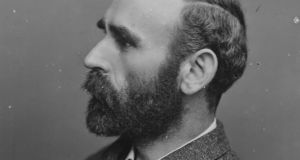 There is nothing new in the use of media campaigns to denigrate opponents but one particularly damaging instance was a series of articles published in The Times in the spring and summer of 1887. Their main theme was to expose links between the Irish Home Rule and land reform movements with violent crime. The centrepiece, under the title Parnellism and Crime, included a forged letter purporting to come from the Irish leader, Charles Stewart Parnell, condoning the assassination of the Chief Secretary to Ireland, Lord Frederick Cavendish (a favourite nephew of prime minister Gladstone’s wife, Mary, and the Under Secretary, Thomas Henry Burke.

Despite Parnell’s immediate denunciation of the letter as “a villainous and barefaced forgery”, the articles had the potential to do great damage to the Irish nationalist cause, partly owing to the newspaper’s authoritative voice among large sections of the British public who believed that anything published in the Times must be true.

The trouble was that although there was no direct association between the Parnellite leaders and violence, there were indirect ones. The Irish nationalist movement could never completely control its wilder spirits and even more worrying were connections with Irish-American dynamiters. However many times the leaders might denounce attacks and intimidation, the perpetrators were sometimes men known to them. Parnell called for a select committee of the House of Commons to investigate the matter. What the Conservative government eventually implemented was an enquiry made up of three judges to investigate not only the forged letters and their provenance, but all the allegations made by the Times against everyone it accused, both MPs and others.

In effect, the Irish land and national movements and its leaders were put on trial in the Special Commission on Parnellism and Crime. The proceedings, held in the neo-Gothic surroundings of Probate Court Number One, in the Courts of Justice, opened on October 22nd, 1888 and in the course of 128 days of sittings examined more than 450 witnesses before reaching its conclusion in November 1889, relatively promptly by today’s standards.

The man who shouldered most of the responsibility for contesting the charges was not Parnell, but Michael Davitt, Mayo-born, of small-farming background, who as a famine emigrant had grown up in the Lancashire town of Haslingden. Davitt had spearheaded the Irish National Land League, a movement aimed at challenging the landlord system. He viewed the Times’s allegations as both a continuation of the Conservatives’ battle against Home Rule and a result of their shock at the extent of support by British electors for the measure in 1886 – he liked to point out that just 100,000 more votes would have secured Gladstone’s return to power in the 1886 elections with a mandate to grant Irish self-government.

By the autumn of 1888, Davitt had given up his work as a journalist to devote all his efforts to defending Irish nationalism against the Times’s charges. He went on the offensive, digging out information about his accusers. He was astonished by the amount of support he received, which enabled him to assemble what he described as “an irregular but most effective intelligence department, with a staff of agents, private detectives, and well-informed correspondents equal to all our requirements”. These included two former agents of Scotland Yard, Sir Edward Jenkinson (alias George Jones) and Matthew O’Brien (alias Sinclair, alias Roberts). In the course of his investigations he uncovered a remarkable network of spies and agents provocateurs employed by Scotland Yard and its Irish equivalent in Dublin Castle. He also attended almost all the investigation’s hearings, briefed counsel, and provided lengthy evidence to the Commission, later published in book form.

The Commission aroused immense interest at the time, the Liberal leader John Morley comparing it in retrospect to the Dreyfus affair. Its sessions were attended by celebrities of the day, including the writers Oscar Wilde and George Meredith and artists Edward Burne-Jones and Sir John Everett Millais, as well as numerous political figures. The high point of drama was the uncovering of Richard Pigott as forger of the letters implicating Parnell and others. A former editor, a notorious blackmailer and writer of begging letters (including to Queen Victoria) and, as Davitt established, a dealer in pornographic books, Pigott had been recognised as the forger by the nationalist side only days after the publication of the letter incriminating Parnell. However, he was publicly cornered in the witness box by Charles Russell, leading counsel on the Parnellite side on February 21st and 22nd, 1889, and after signing a full confession the following day, fled to Madrid, where he took his own life. Davitt was later instrumental in raising funds for his orphaned sons.

The report of the Special Commission was delivered on February 13th, 1890. It found the respondents not guilty of being members of a conspiracy to bring about the absolute independence of Ireland or of inciting the commission of crime “other than intimidation”. All the letters published in the Times presented as coming from nationalist leaders were found to be forgeries. The outcome was debated in parliament and Parnell accorded a standing ovation when he rose to speak.

The Times spent the enormous sum of over £200,000 on fighting the case in the Special Commission and when its plea for government assistance was refused it was compelled to foot the bill on its own. It appears that the paper’s proprietor, John Walter, had been promised support by the government for his efforts. However, in the atmosphere prevailing by the end of the hearings, this was not politically feasible. The scale of its expenditure on the Commission was to have serious implications for the newspaper; its resources were crippled for many years to come. On the Irish side, a defence fund of £40,000 was raised. Parnell subsequently brought a libel action against the Times in Edinburgh, which the paper settled out of court for £5,000 in February 1890.

Nevertheless, Davitt, who had put so much effort and his own funds into defending Parnell’s movement, had to petition his leader several times and was eventually reimbursed only grudgingly. The Irish movement, standing so high in popular estimation following the outcome of the Commission, was soon to be shattered, not by an external attack but an implosion from within, for on Christmas Eve 1889, Captain O’Shea filed for divorce, naming Parnell as co-respondent and the ensuing scandal split the party he had built to strength.

Dr Carla King is the author of Michael Davitt: After the Land League 1882-1906, published by UCD Press, which is launched by Dr Micheline Sheehy-Skeffington on Wednesday, November 23rd, in Room B103, St Patrick’s College (DCU), Drumcondra, Dublin