Books in brief: Sandi Toksvig’s witty memoir and a history of economic bubbles 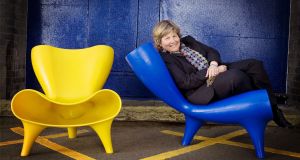 Paul Gosling
Self-Published, €9.99
The second edition of this book, originally published in 2018, is much expanded. Economic and financial journalist Paul Gosling deserves much praise for all the thought, time and effort he’s putting into envisaging what a new Ireland might be like. His original 10-year, 10-point plan is there, including issues relating to financing by the UK and Irish governments and the EU, increased capital spending on the North’s physical and social infrastructure, promotion of the entire island by IDA Ireland, an NHS-type health system for the whole island and a harmonised corporation tax rate. But things have moved on since 2018: the UK has now left the EU, and Covid-19 has shown “the need to treat Ireland as a single geographic entity”. In these new contexts, many fruitful areas for discussion are advanced. Brian Maye

Sandi Toksvig
Virago
Fans of the ebullient broadcaster, comic, activist and writer Sandi Toksvig will delight in her new memoir, Between the Stops. “I have resisted writing a ‘memoir’,” Toksvig writes, “because I didn’t want to create some kind of printed version of the ‘selfie’ ”. And thus, Toksvig does not follow the traditional course of a memoir, but follows instead the route of London’s No 12 bus; the bus she takes between her private home and her sometimes professional home at the BBC. Along the way we weave between personal anecdote, intellectual musings, social commentary and historical record. Toksvig’s trademark humour and passionate intellect fuel the journey. We embark upon issues of gender inequality and the author’s personal experience with her sexuality, although details of her interior life largely remain so. Toksvig’s quick-witted, flitty prose make this an enjoyable journey – I only wish we spent more time getting to know its lead passenger. Brigid O’Dea

Boom and Bust: A Global History of Financial Bubbles

William Quinn and John D Turner
Cambridge University Press, £18.99
A book on financial bubbles beginning with a Pop reference has you expecting something different, and happily the authors deliver a readable and impressively researched title to be enjoyed by the generalist or specialist. Since 1990 a major financial bubble has occurred once every six years on average, say Quinn and Turner, which gives them plenty of grist for the mill. They spread their selections, though: looking back to 1720 and the invention of the bubble, and throwing light on curios of speculation such as the “British bicycle mania” in the 1890s. Chapters on the subprime bubble and Chinese casino capitalism are excellent (the strongest in the book; the reason being more readily accessible data, perhaps). Nevertheless any reader will be invested from start to finish. NJ McGarrigle

A Saint from Texas

Edmund White
Bloomsbury, €18.99
Edmund White was described by John Irving as one of the best writers of his generation. White’s prolific back catalogue chronicles the history of a contemporary America rarely seen outside of the small towns and homesteads in which his stories are set. A Saint from Texas is the dual narrative of the lives of twins Yvette and Yvonne, born in the east Texas prairie but destined to range far from their native soil. Yvonne establishes herself in among the highest ranks of Parisian society, while Yvette finds a life of devotion in a Colombian convent. Ultimately the sisters’ journeys away from each other are also their journeys towards each other as the bonds of sisterhood prove themselves unbreakable. Deeply humorous and strikingly poignant; there is nothing understated about White’s latest contemporary epic. Becky Long

Hazel Hayes
Unbound, £8.99
As Hazel Hayes’s debut novel opens, her central character is packing up her ex-boyfriend’s belongings, wondering where it all went wrong. So far, so conventional romance. Intriguingly, though, the story of this broken romance is told in reverse, with each chapter bringing the reader closer and closer to an end that is, ultimately, also the beginning. Hayes is best known for her YouTube channel and is an established presence on social media. Until now, she has written primarily for the screen, and Out of Love exhibits certain cinematic tendencies as its story of doomed love unfolds. Our narrator’s voice is believable and relatable; the first-person narrative can prove a costly pitfall for the unwary author but not so here. Hayes’s debut is confident and inventive, making for a compelling read and a satisfyingly convincing emotional journey. Becky Long

Holly Bourne
Hodder & Stoughton, £14.99
Holly Bourne is predominantly known for her insightful and provocative young-adult novels, and for her strong advocacy for gender equality and mental health awareness. Both of these concerns usually feature strongly in her work, and Pretending is no exception. April, her central protagonist, is a survivor of sexual trauma, a deeply anxious person who feels controlled by society’s expectations of what women should be. Angry, and feeling powerless, April decides to take the upper hand in the dating game, transforming herself into Gretel, the kind of woman every man wants to be with. But pretending is a complicated game. At times overwhelming in its negativity, Bourne’s novel does eventually allow April to process her trauma and rebuild her sense of self, but the emotional pay-off for the reader’s efforts comes a tad too late. Becky Long