Blowback review: The West as a pest in the Middle East 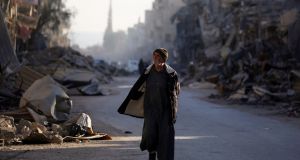 A man walks through a street in Syria’s devastated city of Raqa. Photograph: Delil Souleiman/AFP/Getty Images

The subtitle, How the West F**ked Up the Middle East, sums up the book’s analysis as it devastatingly lays bare the history of western interference in the region, from the British-US covert operation that overthrew the democratically elected Iranian government of Mohammed Mossadegh in 1953 to the present day. “Americans and Europeans rarely ask themselves whether the widespread popular loathing of western policy in the Middle East might actually be justified.”

The CIA would describe that loathing as “blowback”, a term it uses “to describe how secret operations in other countries often rebound on their originator”. Ill-fated interventions in Iraq, Afghanistan, Libya and Syria have shown the yawning chasm between the freedom promised by western democracies and the blood-soaked reality; the interventions are not about freedom or democracy but about securing access to oil and gas and helping Israel to extend its stranglehold over the Palestinian people.