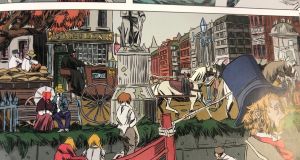 While the artwork is masterful, the plot itself is much less convincing.

The Great Famine of 1845-51 features in hundreds of novels and short stories from the 1840s and beyond, yet visual representations of the crisis are rather more rare.

There is a body of illustrations from periodicals and a fair number of paintings, but only a handful of visual narratives. As such, Damien Goodfellow’s new graphic novel Black ’47: A Story of Ireland’s Great Famine is an original rendering of the worst tragedy in modern Irish history.

While Goodfellow’s work is clearly indebted to earlier famine writing and images, it is largely unique in the way it uses the graphic novel format to narrativise the crisis. There is only a limited repertoire of visual narratives about the famine from before the 2010s; not much beyond the 1918 silent film Knocknagow, one of the earliest Irish movie productions, and the 1995 mini series The Hanging Gale, co-produced by RTÉ and BBC.

In recent years, however, a number of visual narratives set during the crisis have been created, including The Bad Times, a graphic novel by historian Christine Kinealy and illustrator John A. Walsh. The most high-profile production, though, is Lance Daly’s 2018 revenge thriller Black ’47. A major box office success in Ireland and well received elsewhere, the film has been dubbed a “potato western” for its adoption of the genre of the western to tell its story about Irish history.

The novel is rooted in the traditions of comic books, and its art is impressive

The novel is rooted in the traditions of comic books, and its art is impressive. The drawings, often cinematic, juxtapose indigence and death with the desolate beauty of the Irish landscape and the splendour, but also squalor, of the big city. This viscerally brings the poverty and suffering of 19th-century Ireland into the present.

But while the artwork is masterful, the plot itself is much less convincing. It tells the story of 12-year-old Jack Tarpey and his family, whose landlord wants to clear them from the land. Jack falls in with nationalist rebels and becomes involved in a raid during which the landlord is killed. Tarpey snr is a suspect and is killed when he resists arrest. The Tarpeys are evicted, but have a ticket for America.

This is a stereotypical narrative of emigration as redemption, which takes the Tarpey siblings from benighted Ireland to enlightened America, “away from the crushing political powers in Britain”. This is little more than a device to check off all the clichés of the classic nationalist interpretation of the famine as popularised in the 1850s and 1860s by John Mitchel, from savage dragoons to souperism, from selfless priests to coffin ships.

Historical exposition is usually given through somewhat clunky dialogue and underscored by sensationalised violence. Moreover, the story is at times anachronistic or historically incorrect. There wasn’t, in fact, a large-scale failure of the potato crop in 1847, even though the discovery of the blighted field is a major scene in the novel.

Most scholarship on the cultural memory of the famine has highlighted the extent to which the famine past is constructed from certain recurring images and tales, and Goodfellow’s story is no different. Interestingly, it also proves this point through the research that has one into its visual dimension.

Several drawings are derived from iconic images of the famine, but many of these originals are either anachronistic or spurious. For instance, Goodfellow’s representation of Ballinasloe workhouse seems to be modelled on an image purportedly of New Ross workhouse first used in the 1850s and endlessly recycled since. However, the source image is most likely an artist’s impression and bears no actual resemblance to New Ross workhouse or, for that matter, any other Irish workhouse. The closest match is Ripon in Yorkshire.

But this is not a work of history, and Goodfellow doesn’t explicitly lay claim to historical accuracy. Still, Black ’47 is clearly intended as a historical novel. As such, it is disappointing that it follows a questionable version of Irish history. Rejecting the orthodoxies of this particular interpretation of the famine would also have allowed Goodfellow to devise a plot more befitting the originality of the artwork.

All the same, Black ’47 is redeemed by the fact that it beautifully adapts the conventions of the graphic novel to make the history of the Great Famine devastatingly accessible in new ways.

Christopher Cusack is an academic based in Nijmegen, the Netherlands. His PhD thesis analysed the cultural memory of the Great Famine, a topic on which he has published widely.