Belfast Agreement 20 years on: a time to take stock

Caroline Magennis, co-organiser of an academic conference marking the anniversary, on the personal impact of the peace process and the range of topics to be addressed 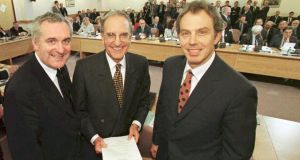 It is a truism to stay that the accord of 1998, known as the Good Friday or the Belfast Agreement, changed the political and social landscape of Northern Ireland. At the time of writing, the first strand (the Assembly and Executive) is under threat due to the stalemate between Sinn Féin and the DUP and the prospect of Direct Rule hangs heavy over negotiations.

It is evident from recent discourse around Brexit and Ireland that many commentators and politicians in Westminster are unfamiliar with the basic tenets of the agreement. The agreement is often used as a proxy to refer to issues in contemporary Northern Irish society or with politicians, in place of a genuine engagement with the ideas that were set out in 1998. As negotiations proceed, the “Irish Question” and the protections of the agreement are more of a stumbling block to Brexit than those who cast their vote last May might have imagined.

All hot takes on the state of the province in our contemporary moment seem tentative and temporary, and the Irish Border has its own comedy Twitter account.

Despite this turbulent landscape, it is a critical moment to reflect on the 20 years that have passed since the people of Northern Ireland voted to ratify the agreement. To young people, the late 1990s are so far away as to be the retro kitsch of meme culture. Many of my own students are younger than the agreement, and their engagement with the 1990s can be limited to discovering TLC and Friends on Netflix.

I try to convey, in my course on Northern Ireland, the overwhelming sense of relief, but this only becomes palpable after we’ve studied the literature and culture of the 1970s and 1980s so they can clearly see how the everyday and the political intersect. It is clear from political debate in the UK, though, that a refresher course on what happened in 1998 is sorely needed for all ages.

In so many ways, the Agreement provokes strong, emotional responses that can cloud critical judgement. I recall the visceral sense of relief I had as a 16-year-old from Portadown who had only experienced life during the Troubles. As the Drumcree standoff escalated each year outside my window all I could do was hope, in my own childish way, for resolution. I did not care then for the minutiae of the document that was dropped through our letterbox, emphasising “It’s Your Decision”.

This feeling came flooding back to me when I watched the finale of Derry Girls’ first season and saw Twitter light up with Northern Irish people of a certain vintage similarly “in bits” watching it. We remembered the false starts of the 1990s in the pits of our stomachs. I thought of what it meant to start my English literature degree in Belfast in 2000 and the hedonism of those nights out in a city where the barriers, physical and otherwise, had been lifted. For me, the Agreement meant nights out without fear and the possibility that we might get a decent Topshop. The “hand of history” was not heavy on my mind.

I offer these reminiscences not entirely for self-indulgence but for two reasons: to foreground how deeply personal responses to the agreement necessarily are but also to focus on the smaller stories that were subsumed into a larger narrative. The major political actors in the process are often foregrounded but this leaves out all the small, everyday acts of the past 20 years which have contributed in their own way to some semblance of normalcy. Often the most radical acts happen around the kitchen table.

Amid the relief of 1998, it is clear that many have been left behind

Many of the articles in this series seek to give voice to small moments of transformation and possibility that are overlooked in a homogenous narrative of “progress”. While the media are presenting the idea of the agreement as something newly under threat, different perspectives can undercut this simple narrative. The agreement has been in states of crisis and threat at various junctures over the last 20 years and has not affected all equally. The forthcoming articles will begin to tell these different stories, and offer a more complex picture of Northern Irish life and culture than the grand reminiscences of those who were in the room.

From a pre-Brexit vantage point, academics and writers were able to offer sustained critiques of the problems with the agreement. Things, and I use this word purposefully, feel different now that it is under threat. The agreement should not be made to carry the burden of all the political choices made in its wake since 1998. It is clear that the current incarnation of “progress” and “peace” work better for some. Racism and homophobia are still a blight on Northern Irish society, and working-class communities feel that they have been excluded from the shiny glass-fronted icons of progress through commercial development.

Women’s role in peacebuilding is often written out from official narratives. Northern Ireland has the highest rate of suicide in the UK and in February it was reported than more people have died from suicide since the Good Friday Agreement than died in the Troubles.

Amid the relief of 1998, it is clear that many have been left behind. For a political accord to stay relevant to social changes, it must have adaptable institutions, policies and actors. In the flexibility and creatively of Northern Irish people we see a model that politicians would do well to learn from. While culture should not be expected have the burden of expectation to do the transformative work of politics, it is clear that artists and writers are reimagining of the possibilities of Northern Ireland and trying to break free from the formal and thematic structures of the past.

The articles that will follow in the coming weeks will deal with a broad array of topics that engage with Northern Irish society since 1998, which both directly and indirectly engage with the agreement. They are significant in their exploration of less mainstream topics, such as comedy, sport and Mo Mowlam’s wig. Taken together, they will offer a richer, fuller picture of the last 20 years which can illuminate our current moment and offer a glimpse into where we could go next.

Caroline Magennis is a lecturer in Twentieth and Twenty-First Century Literature at the University of Salford and the Chair of the British Association for Irish Studies. Forthcoming work includes chapters in the Oxford Handbook of Irish Fiction, the Cambridge History of Irish Women’s Writing and the Routledge Handbook of Contemporary Literary Fiction. She is preparing a monograph on contemporary Northern Irish writing for Bloomsbury.
#Agreement20 is an academic public engagement project organised by George Legg, Caroline Magennis and Maggie Scull.
agreement20.wordpress.com