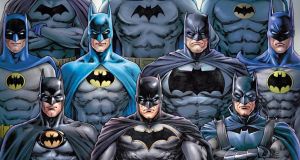 Detective Comics No 1000: the full cover art, drawn by Nicola Scott and coloured by Annette Kwok, will be sold at King’s Comics in Sydney. Photograph courtesy of DC

Holy milestones, Batman! Detective Comics, where the caped crusader debuted on March 30th, 1939, will reach issue number 1,000 on Wednesday, just days before the hero’s 80th birthday. “It is evidence of the greatness and power of the Batman concept that the character has appeared continuously over eight decades,” Peter Sanderson, a comic-book historian, says.

Growing up, I saw versions of Batman in comics and on TV, but one of the great leaps forward was Frank Miller’s The Dark Knight Returns, a four-part story that presented an older version of the hero coming out of retirement to protect Gotham City once more. Miller’s vision helped pave the way for Tim Burton’s film Batman, starring Michael Keaton, perhaps the first time my love of comics was less childish and more socially acceptable.

Since then we’ve had many film Batmen – his on-screen incarnations have oscillated between campy (Joel Schumacher) and dignified (Christopher Nolan) – but his guiding principle has remained the same. “Batman never gives up on his mission to protect the innocent from evil,” Sanderson says.

Comic-book creators, historians and fans helped me pick out key moments in Detective Comics to commemorate Batman’s career. Here they are:

Detective Comics was an anthology series that began in 1937 that eventually gave DC Comics its name. The Bat-Man, as he was then called inside the book, premiered in this issue’s six-page “The Case of the Chemical Syndicate”. (The later cover date – of May, in this instance – was a practice publishers used to keep comics on news-stands longer.) The story introduces Commissioner Gordon, the wealthy Bruce Wayne and his caped alter ego, who thinks nothing of heaving a criminal off a roof. Batman was created by the artist Bob Kane and the writer Bill Finger, although it took many years for Finger to receive credit for his significant contributions to the canon. Another batfact: A copy of Detective No 27 sold at auction for $1.075 million, or €950,000, in 2010.

The world of Batman brightened with the introduction of Robin, the Boy Wonder. “Robin humanises Batman and also allows for some levity in the heavy-shadowed stories of Gotham, while of course hooking young readers with someone they can also relate to,” Peter Tomasi, who writes the current Detective Comics series, says.

It certainly hooked me. When I was a young fan, in the 1970s, Robin, whose real name was Dick Grayson, was one of my introductions to superheroes. I witnessed his growth into adulthood and transformation into Nightwing, a confident, outgoing adventurer who brings together the DC heroes in a way that the more reclusive Batman cannot. Since Dick’s graduation, other Robins have emerged, including Bruce Wayne’s son, Damian.

Michael Uslan, a comic-book historian and a producer of the Batman films, calls this issue transformative. “The Batmobile of 1950,” he says, “redefines Batman, modernises him and moves him into a new generation, equipped with higher tech.” (There have since been many iterations of the Batmobile.) The cover mentions an “Indian lawman”, a sheriff who is Sioux. His name is Ohiyesa Smith. But, in a sign of the times, a character decides, “That name’s too tough to pronounce,” and calls him Pow Wow, based on his philosophy of talking first, then resorting to violence if needed.

“This issue introduces the fabled “new look” Batman, with the yellow circle around his chest symbol and a whole new look and style both visually and in terms of character development and story,” Uslan says. “Readers of that era still feel jarred and elated by this sea change.” The chief architects of the evolution were the editor Julius Schwartz and the artist Carmine Infantino, who came in to shore up sagging sales in the hopes of avoiding cancellation.

When producers of the Batman television series wanted to increase female viewership they asked DC for a new character. They got Batgirl, whose civilian guise is Barbara Gordon, the daughter of Gotham’s police commissioner. Batgirl’s career was halted in 1988, when she was paralysed after being shot by the Joker. She eventually became Oracle, a hacker and information broker aiding DC’s heroes. In 2011 she underwent experimental surgery that returned her to the rooftops. Many fans would love to see Barbara Gordon and Dick Grayson as a romantic dynamic duo.

Batman has no dialogue in “Night of the Stalker,” which is a little gimmicky but manages to work, if you believe the hero’s laser-sharp focus leaves little room for words. The story – written by Steve Englehart, plotted and drawn by Vin and Sal Amendola and inked by Dick Giordano – begins with our hero seeing bank robbers murder a couple in front of their son. After justice is served, Batman unmasks at home. Suddenly “sorrow explodes within him” as he remembers being a boy and witnessing the death of his parents. The final caption: “In this gray-lit, lonely tower, for this single moment in infinity… he is that boy again.”

Another side of Batman emerges in “There Is No Hope in Crime Alley”, by Denny O’Neil and Dick Giordano. Batman makes an annual pilgrimage to the street where his parents died, seeking out Leslie Thompkins, a woman who consoled a young Bruce Wayne on that fateful night. That encounter inspired Leslie to devote herself to charitable work in hopes of preventing future tragedy. In a rarity for Batman, he thanks her and kisses her brow tenderly. In the morning, his loyal butler, Alfred, finds him sleeping peacefully and smiling.

Paul Levitz, whose long career with DC began in 1972, said that assembling the all-star creators for this milestone issue was his proudest editorial moment. The 80 pages include a prose piece by Walter Gibson, the creator of the Shadow, in a tribute to the earliest days of Detective, which included text stories. Another achievement: In 1978, when Levitz took over editing Batman, he read every issue of Batman, Detective and World’s Finest that had featured the hero. It was a daunting task then, and seems nearly impossible today.

Batwoman was originally introduced in Detective No 233 in 1956, in part to give Batman a love interest. It did not take. She was rebooted in 2006 as a lesbian who had been discharged from the military. This Batwoman was embraced by fans, and she took over Detective for a year before graduating to her own series. In 2013, her creative team quit over an editorial edict preventing her from marrying. The decision was about keeping true to the mission of the Batman characters, who have sacrificed their self-interests for the greater good.

This 96-page issue has several stories by a boldface slate of creators. The first, “Batman’s Longest Case”, by Scott Snyder and Greg Capullo, recalls his first adventure. It also introduces the Detective Guild, some of whose members had extensive solo stories in Detective, including Slam Bradley (12 years), Martian Manhunter (nine years) and Elongated Man (five years). “The richness, variety and popularity of these backups contributed to Detective’s success and longevity,” says Richard Roney, a member of the geek squad I run with, who researched and extolled these supporting characters. – New York Times