Tributes to man who inspired ‘The Forge’ and ‘Midnight Anvil’ 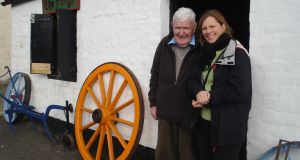 Barney Devlin with the writer Catherine Mack outside his forge in Bellaghy, Co Derry

Heaney first wrote about Devlin in his poem, The Forge, from his 1969 collection, A Door into the Dark, which takes its name from the poem’s first line: “All I know is a door into the dark.”

Heaney returned to the subject again in Midnight Anvil, from his 2006 collection, District and Circle, in which Devlin rings in the millennial New Year on his anvil, while his nephew in Canada hears the clangs at that very moment, thanks to a mobile phone held in the air. It begins:

If I wasn’t there

I still can hear it: twelve blows

Struck for the millennium.

His nephew heard it

Held high as a horse’s ear,

Barney smiling to himself.

A recital of Seamus Heaney's The Forge

Church bels beyond the starres heard

Barney putting it to me:

The Poetry House, an arts group in Derry that promotes Seamus Heaney’s legacy, announced last night: “It is with regret this evening that we announce the passing of our wonderful friend Barney Devlin. A character in his own right, Barney achieved infamy in the latter half of his long life as Seamus Heaney’s unlikely muse in the eponymous poem that brought fame to Barney’s tiny forge at Hillhead. Im sure you will join us in ‘tapping the anvil’ in memory of another great man who this evening has left this place of ours that little bit darker.”

Devlin’s well-preserved forge has become an essential stop-off on the Seamus Heaney tourist trail in Co Derry. “Taking visitors from across the world through the dark door is like a second pension to me in my old age,” Devlin said. “It’s busy and it’s a real honour. People don’t realise it but he actually wrote the poem before he even crossed the dark door. When he arrived he laughed because everything was in place as he wrote it.”

When the poet died in August 2013, the retired blacksmith said: “I was shocked to hear of Seamus’s death. He was only a young man – compared to me anyway. It’s certainly a big loss for the area. He would always have called to see me if he was in Bellaghy but, he hadn’t been about for a couple of years. It is a very sad day indeed,” he said.

In Devlin’s living room, a painting of him and the poet at the “dark door” of the old forge hangs above a handwritten copy of the poem, signed off with the note, “Hammer on Barney”.

Photographer Fergal Kearney paid this tribute to the blacksmith on his Facebook page: “Barney Devlin was a prolific hard worker, never complaining, he was also a great raconteur and latterly a celebrity of sorts, as he regaled visitors from all over the globe with tales of his life at Hillhead and in his tiny forge there that Seamus Heaney, inadvertently I know, brought to the attention of a vast literary world. Barney and the fishermen of Lough Neagh shared that down to earth contentment and humility, armed too with a deadpan humour and intense comfort with their place in the world that should be a life lesson to all of us ... Rest in Peace Barney. May there be an Anvil Chorus at the gates of Heaven to welcome you.”

Yvonne Watterson, a local writer who now lives in Phoenix, Arizona, blogged: “Barney lived for almost a century, with heart and craft and good humor, bringing into his tiny forge thousands of visitors from all over the world. He loved the craic. He loved it when people would stop and give him the time of day. Tonight, I think only [Seamus] Heaney would know what to say about Barney’s passing. He would have the right words.

“Back on that November evening, I recall before leaving the forge, I stopped to sign the visitor’s book. Leafing through it, wondering what I could write that would possibly do it justice, I spotted at the bottom of a page full of positive impressions of Barney and his forge, this note from Seamus Heaney – a tribute that is as fitting an obituary as any: ‘For Barney, old friend and good example of how to do good work and stay true.I’ll maybe write a poem.’”

Devlin became the subject of a minor controversy in 2014 when an interview with him on BBC Television’s Countryfile was subtitled because of his broad rural accent, prompting a chorus of criticism from local Sinn Féin and DUP MLAs, although the BBC confirmed Devlin had no objection.

Barney Devlin be buried on Sunday after a funeral Mass alongside his late wife in nearby Miltown, Co Derry.

All I know is a door into the dark.

Inside, the hammered anvil’s short-pitched ring,

The unpredictable fantail of sparks

Or hiss when a new shoe toughens in water.

The anvil must be somewhere in the centre,

Horned as a unicorn, at one end and square,

Set there immoveable: an altar

Where he expends himself in shape and music.

Sometimes, leather-aproned, hairs in his nose,

He leans out on the jamb, recalls a clatter

Of hoofs where traffic is flashing in rows;

Then grunts and goes in, with a slam and flick

To beat real iron out, to work the bellows.