A forgotten blackbird? The legacy of the soldier poet who was killed on July 31st, 1917 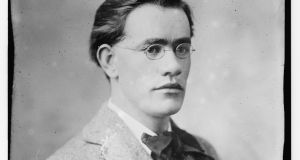 Francis Ledwidge: faced the dilemma of taking up arms against England for his country’s freedom or with England against a common enemy. Photograph: Bain Collection/ Library of Congress

In you, our dead enigma, all the strains
Criss-cross in useless equilibrium –
(In memoriam Francis Ledwidge)

In these lines Seamus Heaney catches the essence of the soldier-poet Francis Ledwidge, the centenary of whose death occurs on July 31st. For many, Ledwidge has remained an enigma: the boy with only a basic education who became a much-loved poet; the nationalist and Irish Volunteer, who fought with the British army in the first World War; the soldier who endured three years of war’s horrors in Gallipoli, Serbia and France but never wrote about that in his poetry.

Heaney argues that Ledwidge showed “a certain visionary, noble, moral side to his nature” when he declared: “I joined the British Army because she stood between Ireland and an enemy common to our civilisation and I would not have her say that she defended us while we did nothing at home but pass resolutions.” So he ended up in Ypres in July 1917, almost foreseeing his own fate:

And now I’m drinking wine in France
The helpless child of circumstance.
Tomorrow will be loud with war
How will I be accounted for?

He was “accounted for” by a stray shell that blew him and his companions to pieces while they were building a road through sodden terrain to bring supplies to the Front.

I’ve always been taken by that phrase, “the helpless child of circumstance”, and used it as the title of a 1987 radio documentary that I made to mark the centenary of his birth. It encapsulates the man and his life – born into extreme poverty in a labourer’s cottage in Slane, Co Meath; his father dying when he was four; having only a basic education, which restricted his work opportunities; being unlucky in love; being lucky with the patronage of Lord Dunsany, who gave him an entrée into the world of poetry; facing the dilemma of taking up arms against England for his country’s freedom or with England against a common enemy. Circumstances dealt a difficult hand of cards to this helpless child.

He had a love of words and their power from an early age – “odd halfpennies which I got for some message run for the neighbours accumulated in time and were exchanged for The Arabian Nights, Robinson Crusoe, Don Quixote, and the poems of Keats and Longfellow”. Nurtured at school by Master Madden and encouraged by Lord Dunsany, he would eventually publish three volumes: Songs of the Fields, Songs of Peace and Last Songs (the last two posthumously).

Yet despite the horror of the battlefields, he never wrote about war. Instead, “I could find the truth of Beauty / In the fields I left behind”. He wrote about home, nature, love and loss, friendship. He became known as “the Poet of the Blackbird”, “the poet of the Boyne”. He was not alone in avoiding the nightmare unfolding around him; Heaney reminds us that most of the poetry from the trenches was of “pastoral recourse”, compensating for the horrific by remembering the prewar pastoral life of home. “The hills of home are in my mind / And there I wander as I will”.

There is, however, one aspect of Ledwidge’s writing that gives an insight into the reality of his life: the letters that he wrote home to his male friends, his girlfriend Lizzie Healy, Dunsany and fellow-poet Katherine Tynan (all credit to his biographer, Alice Curtayne, who researched those letters meticulously).

We are particularly fortunate in having the autobiographical letter he wrote to the American Prof Lewis Chase. Ledwidge writes to Dunsany about the horrors of Serbia: “No words could describe the cold, the blizzards, the frost and the hunger”. To Bobby Anderson in Slane he requests, “Remember me to everyone I know. Does W. Corbally still come in the morning and Jack McGurk for his brown cake? I keep always remembering the little things.” To Paddy Healy he writes, “How is Navan? Remember me to the pump on the market square when next you go there, and the clock over Walshe’s.” To Lizzie he pleads, “Please dear Lizzie, send me a flower from the bog, plucked specially for me. I am waiting to be called home, God send it soon.” And to Katherine: “I hear the roads calling, and the hills, and the rivers wondering where I am, it is terrible to be always homesick”. In his poem On Dream Water he muses, “And I was wondering in my mind / How many would remember me”.

On the centenary of his death it is a pertinent question. Older generations will remember learning poems like Thomas McDonagh and June; more recent generations will scarcely have heard of him. As Heaney reminds us, however, “He is a contributor to our common memory and therefore is to be honoured”. And he will be – through books, An Post’s commemorative stamp and documentaries. On July 31st, friends of Francis Ledwidge gather at his grave in Ypres to honour the memory of what Heaney called “a tender beautiful figure, walking in a mist of melancholy”.
This article was first published in the current isuse of Books Ireland. As part of History Ireland’s Hedge School series, editor Tommy Graham moderates a panel discussion, “Poet of the blackbirds” the life and death of Francis Ledwidge, at Richmond Barracks Gymnasium, Inchicore, Dublin 8, at 7pm on Thursday, July 27th. Admission free