As the world went to war, James Joyce plotted his own revolution

This extract from ‘The Most Dangerous Book: The Battle for James Joyce’s Ulysses’ traces the genesis of a classic 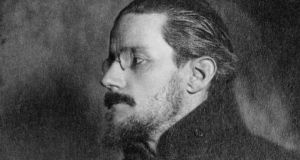 Joyce finished the first chapter of Ulysses on June 16th, 1915, and it could not have been easy. The Berlitz school where he was teaching closed indefinitely that day. Most of the teachers were conscripted, and the students had enlisted or fled. Yet as the cannonades and air raids came closer to his apartment in Trieste, Joyce tunnelled deeper into his novel. He composed the young men’s dialogue on the tower’s parapet while small crowds gathered on Trieste’s waterfront and listened to the gunfire coming from a town a few kilometres away. Austrian Triestines mocked the Italian battle cry by shouting, “Avanti, Cagoia!” – “Forward, snails!” The cheers grew louder with each explosion.

As an Austrian port with an Italian population and a mostly Slavic police force, the city began to tear itself apart. When news of Italy’s declaration spread, Austrian mobs roamed through the streets, attacking Italian nationalists and destroying Italian restaurants and cafes. Sailors vandalised the statue of Verdi in one of the piazzas, and when they burned the offices of pro-Italian newspapers the police simply watched. The Joyce family was placed on a list of enemy aliens, and Joyce’s brother Stanislaus, who made his Italian sympathies clear, was arrested and placed in an internment camp. By the end of May the Triestine authorities dissolved the municipal council, censored the press and the mail, deported Italians en masse and declared a state of siege. When the last train for Italy left, Trieste felt like an open-air prison. Shops were shuttered. Lines formed all night in front of the last open bakery, and food prices rocketed. “Whoever has the last sack of flour,” Joyce said, “will win the war.”

Joyce was hardly in a position to embark on a new novel, much less a novel as ambitious as Ulysses. In 1915 he was unemployed, perched on the edge of a battlefront with a wife and two children and as poor as he had ever been. A Portrait of the Artist As a Young Man was unpublished, and Dubliners had appeared in bookshops two weeks before the assassination of Archduke Franz Ferdinand, which triggered the outbreak of the first World War. At the end of 1914 only 499 copies had been sold (120 of which Joyce was required to buy himself), and sales were crawling to a standstill. In the first six months of 1915, 26 copies of Dubliners were sold. In the last six months, only seven.

Ulysses began as a whim. It was originally an idea for a short story to tag along in Dubliners. Alfred H Hunter – the lonely, benevolent Jew in Dublin who had lifted Joyce from the dirt in St Stephen’s Green – was a hero of the Trojan War, the protagonist of Homer’s greatest epic, the king of Ithaca, Ulysses. The Hunter-as-Ulysses equation was well suited for a short story, but the concept had grown in Joyce’s mind.

By the early 20th century the idea of an epic seemed antiquated. The Odyssey represented the essence of a cohesive civilisation, and if the war demonstrated anything it was that Europe was fragmentary. An Irish Odyssey would be a mock epic, a tale that invoked classical comparisons to deride what civilisation had become. For Joyce there was a mischievous thrill in reimagining the epic stage as dowdy, dirty Dublin. Dublin’s Ulysses is not a king but an ad canvasser for a newspaper, and he returns home not to a faithful queen but to a wife who cheated on him earlier that day. To see the life of Leopold Bloom through the adventures of Ulysses was to peer into the 20th century through the cracked looking glass of antiquity.

The epiphany belongs to the future. Joyce could see himself as a young man in Dublin now that the bombs were falling around Trieste. And so it is with civilisations telling their stories. Dublin, crossing the threshold of the 20th century, could gaze back to see itself on the Homeric stage at last.

And Joyce added yet another level of complexity – something that fused the modern world’s disparate orders of magnitude. Instead of an epic unfolding over the course of years, Ulysses would take place on one day. In the 21st century a circadian novel seems natural. We are accustomed to the tick-tock of live reports, RSS feeds, status updates and 24-hour news feeding us the perception that global events turn on single days. Yet in 1915 the notion that a single day was an appropriate time frame for an extended novel, or that in the limits of smallness we could find a culture’s grand pattern, was, to say the least, exotic. A few writers had written single-day novels before, but none on the scale that Joyce imagined – no one thought of a day as an epic. Joyce was planning to turn a single day into a recursive unit of dazzling complexity in which the circadian part was simultaneously the epochal whole. A June day in Dublin would be a fractal of western civilisation.

Joyce continued the story of Stephen Dedalus in the opening chapters of Ulysses. Stephen is 22 and swimming in his ideas. He walks along the shore in Sandycove and thinks not so much about what he sees as the fact that he is seeing it.

Ineluctable modality of the visible: at least that if no more, thought through my eyes. Signatures of all things I am here to read, seaspawn and seawrack, the nearing tide, that rusty boot. Snotgreen, bluesilver, rust: coloured signs. Limits of the diaphane.

It was not the type of prose that flew off the shelves. It was, however, a new rendering of the way people think. Thoughts don’t flow like the luxuriant sentences of Henry James. Consciousness is not a stream. It is a brief assembly of fragments on the margins of the deep, a rusty boot briefly washed ashore before the tide reclaims it. Joyce wanted Stephen’s thoughts to be clipped and prismatic. He wanted to strip thoughts and emotions down to their essentials. He wanted density, the bones of communication, the sharp utterance, the urgent telegram, the MOTHER DYING COME HOME FATHER.