Anthony Burgess: a mind like clockwork and a fearless pen 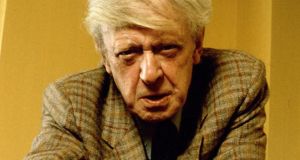 Anthony Burgess is one of the most underrated writers in the English language. This does a disservice to a half-century of superb work until his death in 1993, encompassing novels of every conceivable genre, poetry, criticism, screenwriting, even musical composition.

UK publisher Serpent’s Tail, for one, has recognised Burgess’s multifaceted genius with recent reissues of his books 1985 , Tremor of Intent and One Hand Clapping , following last November’s Napoleon Symphony . Complete with new covers and introductory essays, they give a sample of the Mancunian’s versatility and easy brilliance.

1985 divides itself between essays on Orwell’s Nineteen Eighty-Four and an alternative fictional dystopia; Tremor of Intent somehow works as both espionage thriller and meditation on the nature of heaven and hell; and One Hand Clapping is a breezy, perceptive satire.

Rebecca Gray, commissioning editor at Serpent’s Tail, outlines the motivation behind these reissues and explains the enduring appeal of Burgess: “These out-of-print classics were probably the most eclectic group of books by one author I’ve ever come across, and it’s just a fraction of his work. He wrote so much it’s impossible to appreciate his full range – he excelled at so many things.

“He is fearless: he’d try anything and he’s not afraid to fail, which means that – most of the time – he succeeded in wild, extravagant ways. He’s playful, innovative, creates new forms, new languages, but also subverts established forms, ideas, structures. There is truly no one else like him, and he takes such pleasure in upsetting people’s ideas about what’s allowed. Plus he’s cleverer than anyone I can think of, just on the basis of what he put down on paper. I would have been terrified to meet him in person, he seems dazzlingly quick-witted.

“ 1985 is like Burgess himself: a mass of ideas combined to engage, infuriate, challenge or baffle the reader. Tremor of Intent is John le Carré on crack. And One Hand Clapping is both a simple morality tale and scathing satire that rings as true today as it must have when it was published.”

Irish writer Julian Gough, now living in Berlin, knows about versatility and risk-taking. A former alt-pop star with Toasted Heretic, he’s since won awards for serio-comic novels, such as Jude in London , and has written plays for BBC radio and Druid Theatre.

Naturally, he’s quick to sing Burgess’s praises: “I like him because he is exuberant, pleased with himself, ambitious. Some of the books, in particular A Clockwork Orange , have absolutely electric prose. As with Norman Mailer, the shorter books he banged out are perhaps better than the longer ones he slaved over, but that’s okay. 1985 is fascinating, a book I greatly enjoyed as a young fellow. The election of Maggie Thatcher, and her dismantling of the unions, rendered it an historical curiosity almost immediately, but what an enjoyable curiosity.

“It’s a history of a future that never happened, and I’ve always been surprised it isn’t better known. It’s gloomy, paranoid, deeply confused about race, sex, religion, culture; in short, it might be the best British novel about the politics of the 1970s.

“My favourite Burgess is A Clockwork Orange , which he was very dismissive of. It’s fuelled by rage and fear. If Burgess has a fault, it’s that his intellect sometimes over-controls the work. In his best books, he has clearly lost control of the material, and his unconscious is joy-riding the narrative bus. A Clockwork Orange has the deep ambiguity of great art. I suspect Burgess dismissed it because he was scared of it. It’s beyond morality. It’s primal, very human. It says things the author’s conscious mind would never agree with.”

Gough also makes an interesting argument as to why Burgess is so undervalued: “He was very clever – and made the mistake of not hiding that fact. So he was underrated for the same reason most ostentatiously clever writers are: he was cleverer than his reviewers. Reviewers can only read, and appreciate, at the level of their own intelligence.

“The musical structures and references, linguistic playfulness and punning between languages: these weren’t even noticed by most of the tone-deaf, monolingual English reviewers. But they were dimly aware of missing something, so he often got highly grudging reviews from people who felt Burgess was talking over their heads.”

Burgess is the subject of much academic study. Dr Glyn White runs the module “Anthony Burgess and his Contemporaries” at the University of Salford, in conjunction with the International Anthony Burgess Foundation in Manchester.

“Essentially, [the course] uses Burgess as a way into postwar British writing, showing his links with a variety of contemporaries and their shared concerns,” says White. “The idea is to integrate, or reintegrate, Burgess into our picture of literature instead of allowing him to remain effectively in exile. The great success of A Clockwork Orange as a film got him wrongly pigeonholed by some, but he didn’t plough only one furrow.”

White highlights the “inventive use of language, and diversity and idiosyncrasy of his novels” as particular Burgess strong points. “In the Malayan trilogy he’s a colonial and postcolonial writer. Many of his works feature trenchant satire, science fiction, dystopic visions. The Enderby books are funny and fascinating, presenting artistic production as a kind of disease. Of the reissues, One Hand Clapping is my favourite. A good idea thoroughly and readably delivered, and a really interesting narratorial voice.

“Overall, I’d probably pick The Clockwork Testament , a furious and eccentric response to being famous for a film he didn’t write.”

Would Burgess have made it today, when publishing is more convergent, market-driven and risk-averse? Glyn White and Rebecca Gray think so.

“I think he would have: if any writer has ever embodied irrepressibility, it is Burgess,” says Gray.