A song of survival: Neil Hegarty on Janet Frame and Owls Do Cry

A devastating reflection on conventional society and the dangers for those who reject its narrowness; a vivid social document; and a heartbreaking, lyrical evocation of childhood 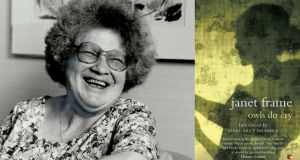 Janet Frame, whose novel, Owls Do Cry, has been reissued by Virago with a foreword by Margaret Drabble. Nobel Prize-winning author Patrick White once mournfully told his US publisher that the book “makes me feel I have always been a couple of steps out from where I wanted to get in my own writing”. Photograph: Getty Images 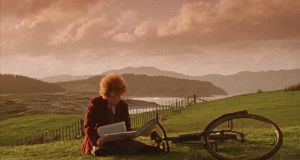 Karen Fergusson as a young Janet Frame in Jane Campion’s 1990 film, An Angel At My Table, based on Frame’s powerful autobiographical trilogy written to set the record straight about her private life

In 1963, the august Australian novelist Patrick White wrote a fan letter. The recipient of his note was the New Zealand writer Janet Frame, then living the life of an expatriate in London – and experiencing a startling blaze of creativity. Since the appearance in 1957 of her debut novel Owls Do Cry, Frame had published three more books, with a fifth in the works.

Ostensibly White and Frame could not have been more unalike: for while White’s reputation was already fully established (he would win the Nobel Prize for Literature in 1973), Frame’s writing was not always finding favour with the critics. White, however, had read Owls Do Cry – and had mournfully told his American publisher that the book “makes me feel I have always been a couple of steps out from where I wanted to get in my own writing”.

Owls Do Cry has now been reissued with a nuanced and appreciative introduction by Margaret Drabble, who calls the novel “an exhilarating and dazzling prelude to [Frame’s] long and successful career.” The narrative covers 20 years in the life of the Withers family, who live on New Zealand’s South Island in a seaside town (“Their town, called Waimaru, was as small as the world and halfway between the South Pole and the Equator”) not unlike Frame’s native Oamaru. The novel focuses upon the four Withers children, who inhabit a world of the imagination as a means of refuge from the tragedies that dog their lives. Specifically it dwells on Daphne Withers, whose journey from childhood to adulthood is also a journey into a state deemed insane. The adult Daphne is condemned to undergo a leucotomy – a terrifying brain procedure aimed at ameliorating psychiatric conditions, and commonly carried out in the middle of the twentieth century, in spite of its well-recognised and devastating side-effects. While Daphne awaits her operation, she “sings” from “the dead room” in a brilliantly coloured stream of consciousness.

Owls Do Cry is a devastating reflection on the character of conventional society and the dangers that await those who reject its narrowness – and as such, is profoundly chilling. It is also a vivid social document, capturing the language and texture of the postwar period. It is a heartbreaking evocation of childhood and a child’s vision of the world; and not least, it is a work of considerable lyrical beauty. All of this, and more, is achieved by means of a continually shifting narrative mode: a revolving kaleidoscope forcing the reader to square up to questions of judgment and morality, sanity and insanity, death and life.

The publication of Owls Do Cry created a sensation. Some critics recognised in the book a scathing satire upon what were taken to be the narrow orthodoxies and materialism of contemporary New Zealand – and by extension, western – society; others hailed a modernist classic and recognised the advent of a new voice that owed little or nothing to other influences. Still others, however, wondered how much of the book was based on Frame’s own life: the Sunday Times grumbled at the book’s “poetic, rather dotty stream of consciousness”; and speculated on the author’s own state of mind.

In his fan letter to Frame, White had bracing and cheering advice: “You have had some very silly reviews,” he wrote, “but don’t let that worry you. You are the most exciting writer I have come across since Yevtushenko.” Frame was pleased – although it took her 22 years to reply. “When your letter came,” she told White in 1985, “I was so much overwhelmed that I couldn’t think how to answer it. It has now become part of my life […] as ‘the letter’ and has […] assumed a literary life of its own. I’m using the left-over courage needed on a jet flight to Sydney to greet you [and] to say thank you for your encouragement and for your own wonderful writing...”

Owls Do Cry was the first of the 11 novels Frame published during her lifetime: and the book helped to establish her reputation for power and originality. But a certain critical predisposition also materialised at this time that would shadow her writing career. Henceforth, Frame’s life story would be eyed beadily: the state of her mind, her mental health, her (as the 1966 Encyclopaedia of New Zealand put it) “tragic and disordered power”, would be speculated upon. Some of this attention was inevitable, given the facts of Frame’s own life story: her family was pursued by illness and tragedy; and she herself had been diagnosed with schizophrenia, institutionalised (the scene, a vast and gloomy Gothic asylum on a cliff above the Pacific, was in itself the stuff of nightmares) and in 1952 scheduled to undergo a leucotomy as a “cure”. Frame escaped this fate only because an early collection of short fiction was awarded New Zealand’s principal literary prize: as a result, the operation was cancelled. Frame noted later that writing had literally saved her life.

Doctors in Britain subsequently ruled that Frame was not and never had been schizophrenic – and yet the speculation continued. Aspects of her life – her need for privacy, her unwillingness to go on the writers’ circuit of festivals and readings, her restlessness – were analysed for evidence of madness or eccentricity. But reclusiveness and eccentricity are words loaded with prejorative meaning – and aspects of this attention are unmistakeably gendered: there are elements of a prurience that is distinctly Victorian in nature. It was to set the record straight that Frame wrote her own powerful autobiographical trilogy, published today as An Angel at My Table – which was also the title of Jane Campion’s subsequent, deeply moving film. Later, Michael King’s biography of Frame portrayed a woman widely travelled, capable of sustaining long friendships, of reading in public and developing a career.

There is a natural urge to assess Frame’ writing against the challenges of her life – especially as she herself in her writing repeatedly revisited and reworked these difficulties. The key to this point, however, lies in her lifetime of work. Drabble notes that Owls Do Cry, for all that it deals with trauma, “has a buoyancy of creativity and brightness. Some of its characters encounter defeat, but it is a song of survival.”

This same point might be made of Janet Frame herself: that she emerged victorious – and the evidence of this victory lies not in parsing excessively the stuff of her life, but in reading what she created in the course of it.

Owls Do Cry, with an introduction by Margaret Drabble, is published by Virago. Neil Hegarty’s The Inch Levels is forthcoming from Head of Zeus

I stole €1.75m from An Post to fuel a gambling addiction