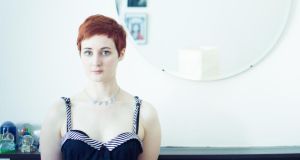 Kirsty Logan: storytelling is to the fore in the Scottish writer’s captivating second collection

Storytelling is to the fore in the captivating second collection from the Scottish writer Kirsty Logan. The age-old framework of passing tales down through generations gets a modern makeover in A Portable Shelter. Ruth and her partner, Liska, have escaped to the north coast of Scotland to await the birth of their first child. Having promised each other to only tell “plain truths”, and no stories, to Coorie – the name is the Scots word for snuggle – both go back on their word. Ruth whispers stories to the baby she’s carrying while Liska works. In the night, while Ruth sleeps, Liska gets her turn.

Each story has an introduction from either narrator, a device that could grate in lesser hands. Instead it acts like a comfort blanket, the feeling of being tucked in at bedtime before a tantalising tale. Knowledgeable and trustworthy, the women act as guides to life for their unborn child.

Logan’s first collection, The Rental Heart and Other Fairytales, won the Scott Prize and was longlisted for the Frank O’Connor International Short Story Award. Last year her debut novel, The Gracekeepers, blended the surreal with the everyday in an underwater dystopia. Her new collection continues in this vein, recalling contemporaries like Diane Cook, Joanna Walsh, Laura van den Berg and Jan Carson.

Ex tells of a young man who refuses to be defined by his past. Ex-brother, ex-victim, ex-boyfriend, ex-father, he highlights people’s relentless need to explain behaviours and understand circumstances through narrative: “Because, because, because. I hate that fucking word.” His insights are central to all 13 tales: “The future is a story we tell ourselves, and ‘perfect’ is the biggest story of all.”

Fantasy, folklore and fairy tale feature prominently in the stories of Ruth and Liska’s ancestors. In Cutting Teeth, a fantastical tale of night-time hunting with a wolf, pregnant Ash must choose whether to relinquish a part of herself for motherhood, understanding that she cannot be “two people in one seamless skin”. The Keep uses an effective first-person-plural voice to tell the desperate story of girls who made a wrong choice and ended up in “a make-believe home the size of eight coffins lashed together”.

Another young girl holidays on Arran with her family, in Cold Enough to Start Fires. Her story morphs into that of her father, who in turn relates how he longs to escape his own father’s story but comes to resent the personal sacrifices he has to make to be a good family man.

The loss of self is a recurring theme, most notably in The Elephant Dance, where Liska’s mother runs away with a circus before eventually returning home with the moral: “I didn’t understand that there’s magic everywhere, if you look for it.”

The loneliness and small hopes of life are crystallised in Flinch, where a solitary fisherman takes a leap of faith in dark Scottish waters.

Creatures, both real and mythical, run through the collection. Wolves, dragons, bears and witches appear alongside characters struggling to deal with change or trauma.

Although preoccupied with tales of motherhood and birth, A Portable Shelter is also steeped in death. In The Exact Sound of Grief an introduction from Ruth tells Coorie: “I thought grief might feel like being always full of cold water. I thought it might feel like inside your body there’s an empty space that’s bigger than your body.” The story that follows cleverly shows another perspective.

Logan’s humour on morbid topics shines through in the closing stories. Small World uses a dialogue format reminiscent of Nina Stibbe’s novels to show a man’s reaction to his wife’s leaving him. Initially convinced that she has been replaced by a changeling, he later decides: “I’ve figured it out. You have a brain tumour. In your prefrontal cortex.”

The Ghost Club – with a satisfying introduction where Ruth and Liska finally unite – depicts a group meeting to deal with the ghosts of their dead: “A twelve-step programme to rid yourself of the drug of irrationality”. As with each of these lovingly crafted stories, there is a moral – the why of all events and characters – related not just for Coorie but also for the reader’s pleasure: “Some people are happy with treasures and wide oceans. Some people are happy with a single stone. It doesn’t matter what others want if it’s not what you want.”

Which is, in many ways, the basis of all stories about this journey we call life.