Brief reviews of Seven Letters, The Secret Life of Books, The Naked Irish, The Town, All Things Consoled, Godsend and Only Americans Burn in Hell 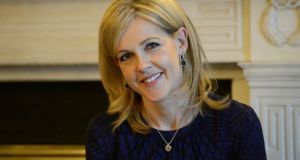 Sarah is defined by her role as a mother. Every year she writes a birthday love letter to young daughter Izzy and when she falls pregnant for a second time, she dreams about the arrival of a baby brother for her little girl. But when Sarah collapses and her life and pregnancy are jeopardised, her family must decide what’s best for her. The story unfolds within a three-week timeline, emotional intensity building as the family struggle to cope with medical and ethical decisions, trying at every turn to act with love. Heart-breaking and poignant, this is perhaps Moriarty’s most moving novel to date, written in the aftermath of the Repeal referendum and inspired by a court case that affected the nation. Affecting and thought-provoking. – Becky Long

The Secret Life of Books: Why They Mean More Than Words
Tom Mole
Elliot & Thompson, £14.99

Obsolescence invites us to ponder what we might be on the verge of losing. Since the advent of digital technology, the “death of the book” has been ceaselessly proclaimed. Tom Mole, a self-professed bibliophile, is concerned by the prospect. The Secret Life of Books, though, is no jeremiad. Mole, Professor of English at the University of Edinburgh, has written a paean to the book that is elegiac but never mawkishly so. We must remember, he reminds us, that printed books are themselves a technology, however much we invest them with notions of transcendence; they are things, plain and simple. Across a series of vignettes and anecdotes, Mole illustrates this often overlooked fact. This is a highly accessible and readable introduction to an ostensibly rarefied topic. – Luke Warde

O’Dea takes a clear-headed look at the state of the nation through 10 topics (emigration, arts, booze, violence etc) and tries to scrape away lazy stereotypes that are associated with the Irish. Some chapters are stronger than others (united Ireland, economy, English neighbours) in a book wisely grounded on statistical and historical research. It reads best, however, when O’Dea talks with people and relates the subjects to her own experience. There’s nothing particularly revelatory here, and anyone that follows the news in Ireland will likely be familiar with much of what’s said. But then O’Dea, a journalist based in Switzerland, could have a different audience in mind: those outside Ireland who have reasons for peering in; for them this will prove a handy book indeed. – NJ McGarrigle

“When inside certain towns, the rest of the world disappears.” A writer moves to the Australian outback to research vanishing towns: he encounters odd, ominous phenomena such as a train-less train station, a bus that never picks up passengers, and a townspeople who are distrustful of outsiders and have no collective memory – there is no history. The writer forms uneasy relationships with the inhabitants, always with a sense of disconnection, of isolation; meanwhile the town starts to literally disappear, as bizarre holes materialise. Reminiscent of the European tradition of philosophical surrealism, the narrative is detached, wry and deeply metaphorical, bearing such a vast sense of loneliness and futility that it is sometimes hard to carry: this is the crux of the book, which is a smart existentialist exposition, cast with a droll and clever eye. – Ruth Mckee

This is a moving, poignant, honest and beautifully written memoir of her parents’ declining years by the Canadian novelist, Elizabeth Hay. She brings vividly to life her artist mother Jean, whose abiding characteristic was her extraordinary frugality, and her schoolteacher and principal father Gordon, a strict disciplinarian with a violent temper. Although there are many flashbacks, most of the book focuses on their last few years and does not flinch from the indignities of old age. What is striking is how Hay honestly faces their all-too-human shortcomings and failings as parents and her own as their daughter. By doing so, she emerges with a more nuanced and deeper understanding of both herself and them, finding a delightful humour in much of what they said and did, even in decline. – Brian Maye

John Wray originally set out to write his non-fiction debut; a biography of John Walker Lindh, the young American captured by the US army in 2001 having joined the Taliban mere months before the 9/11 attacks. What he actually wrote is the fictional story of an American woman who disguises herself as a man and joins the Taliban. Intense yet economic, equally poignant and chilling, Godsend melds reality and myth into an intelligent spy thriller with an enigmatic protagonist at its core. An unlikely and complex parable that puts faith, religion, gender and identity under an unforgiving spotlight, Wray has produced something genuinely thought-provoking, in an era when debate and discourse are becoming increasingly vulnerable to censorship and limitation. – Becky Long

Kobek takes David Foster Wallace, David Shields and Geoff Dwyer and blasts them into the Twitter-twitch zone producing a fragmented text mirroring the online world of our lives. Biography and news events are melded with memes and tales of supranatural beings in a world become Hyperreal (Trump) as predicted by the oft lambasted Jean Baudrillard and Michel Foucault. Beings from Fairy Land land in LA – home of the media mirror fake world – for adventures with characters and a plot where the narrative is derided by its own author. Biting commentary with teeth on Trump, #MeToo, Facebook, Google and the Death Star that is America – with added bible readings and Oresteia interpretations – manages to take an angry funny zeitgeisty satire selfie of a world long gone beyond satire. Lol. – Kevin Gildea