A magnificent tribute to Seamus Heaney 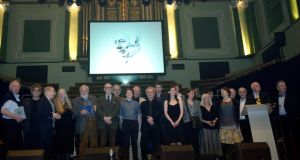 Singer songwriter Paul Simon onstage at the National Concert Hall, Dublin, with fellow artists prior to the Seamus Heaney tribute in association with Poetry Ireland and Dublin City Council as part of One City One Book. Photograph: Brenda Fitzsimons

On Wednesday, April 23rd, Poetry Ireland and Dublin City Council hosted a magnificent event in the National Concert Hall to commemorate and celebrate our recently lost great poet and great spirit, Seamus Heaney. I had come in from New York that morning, where the death of Gabriel García Marquez was being mourned by many. Another great writer who took his world responsibilities seriously had left us, and Seamus Heaney’s name was mentioned in the same breath. These are rare people, who can stir the human imagination in the places they come from and much farther afield. They preside over the real world of human need, longing, joy, sadness and ingenuity. We need them.

The night consisted of Seamus’s poetry, read by an array of distinguished poets, and music, played and sung by some of our finest musicians. There were no speeches, just short introductions from John Kelly, an exemplary host; only the pure exposure of the range of Heaney’s extraordinary body of work, presented to us by his fellow poets in a beautifully chosen selection. The choices gave us the breadth of Heaney’s many concerns – love, family relationships, landscape, the conflict in the North, the human spirit under pressures both good and bad, above all, detail, his eye for the look or the phrase or the gesture which defined someone, or his precise knowledge of spaces and their contents, of fields and their mysteries, of customs and practices which give meaning to ordinary life.

To hear these poems read by Michael Longley, Tomas Venclova, the prodigy Niall O’hAnnagáin, Colette Bryce, Theo Dorgan, Medbh McGuckian, Eiléan Ní Chuilleanáin, Ciaran Carson, John McAuliffe, Peter Fallon, Paula Meehan, Paul Muldoon, President Michael D Higgins and Seamus himself, each with their own unique inflections, accents, styles and grip on the poems, was to witness the power and modesty which characterised the man and his work. He knew he had power, and wielded it modestly, helpfully, responsibly and beautifully. And because all of these poets behaved and read so impeccably and humbly, we were able to hear the work in all of its pure intention, skill and intelligence. For this alone, the night was priceless.

It is invidious to single out any of them, but Michael Longley’s The Harvest Bow (“The end of art is peace”), Theo Dorgan’s A Kite for Michael and Christopher (“Stand in here in front of me / And take the strain.”) Peter Fallon’s and Lisa Hannigan’s Their Dialogue: A Villanelle for Marie (“Love is longing too”), John McAuliffe’s Casualty (“He was blown to bits / Out drinking in a curfew”), Paula Meehan’s In Time (for Siofra) (“Energy, balance, outbreak”) and Paul Muldoon’s Keeping Going (“Do you hear me talking to you?”) stay in the mind. No one could have served Seamus so well, except of course himself, and it was lovely, and sad, to hear him read The Given Note, The Blackbird of Glanmore and Postscript.

We also had the pleasure of hearing some wonderful music, from Liam O’Flynn, Paul Brady, Dónal Lunny, Zoë Conway, Neil Martin, Micheál Ó’Súilleabháin, Lisa Hannigan, John McIntyre, the RTÉ Concert Orchestra, and the legendary Paul Simon, who composed a perfect Paul Simon song from a mashup of some of the poems in Seeing Things, with some help from Paul Muldoon on the plane over from the US, and then added the master fiddler Martin Hayes into the mix to create something new and sublime:

But this year I face the ice

With my father’s stick.”

And Paul Brady sang Arthur McBride, about which nothing need be said but thanks, again. Liam O’Flynn played his pipes with his customary precision and beauty, and that presiding genius of Irish music, Dónal Lunny, cast his magic over a splendid tribute to Peadar O’Donnell.

A flawless evening like this does not happen without meticulous planning and execution, and Maureen Kennelly, Peter Fallon, Alan Gilsenan and Jane Alger deserve our thanks for the energy, intelligence and judiciousness they applied to the task. I hope and expect that the evening proved as consolatory, uplifting and fondly affectionate to Marie and her family as it did to the wider audience, who will be talking about it for a very long time. The family is still only eight months into that strange territory we inhabit when a beloved person is taken from us suddenly. The mixture of pride, love and extreme loss that they probably feel on these nights must be both consoling and heartbreaking.

Paula Meehan says great poets never die; Seamus’s last message, so generously shared with us by Marie, was “noli timere”. The fearless beauty of his poetry shone out of every aspect of last Wednesday, and that will always remain.