A lament for modern publishing

Publishing is a corporatised, market-driven, bottom-line privileging of the blockbuster, maintained by writers’ low-wage drudgery. Marketing is king, and critics absorb the advertising code: do not offend 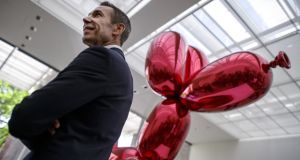 Jeff Koons with his Balloon Dog (Red): the emblematic, twinkling-eyed face of publishing’s New Economy for Fiona O’Connor – “I like it, I like it”, the anti-critic’s jingling ethos in the celebration of banality. Photograph: Fabrice Coffrini/AFP/GettyImages

The critic Christopher Ricks gave a superb talk in London last week. At a Poetry Society marking of the centenary of TS Eliot’s The Lovesong of J Alfred Prufrock, Ricks focused on the practical exigencies of writing faced by Eliot in 1915. It was against the pressure of these literary givens that the revolutionary Prufrock poem reacted, because in 1915 the prevailing obstacle to good poetry was poesy, Ricks said. Eliot’s Prufrock is obliged to make “a face to meet the faces that you meet” in the guise of editorial/critical expectations, stylistic tropes, sentimental banality. A hundred years on, the nature of publishing throws up a more impenetrable façade: marketing. Publishing is a corporatised, market-driven, bottom-line privileging of the blockbuster in a world where, as Will Self puts it, “market choice is the only human desideratum”. Like any of the giant conglomerates, the publishing megalith is maintained by low-wage drudgery; in this case it is writers who toil for poverty-line rates with no security and few rights. The figures speak volumes.

In 2014-15 the British and Irish publishing industry turnover was £4.6 billion, up from £3 billion in 2013. Against this apparent boom the Authors’ Licensing and Collecting Society warns that author’s incomes have collapsed. The median income of established professional authors is £11,000, down 29 per cent since 2005. But the typical median income of all writers is less than £4,000 and declining yearly. Output of books is rising steadily: 185,000 releases this year in the UK and Ireland. The writer’s share of this benison is about 2.8 per cent – that’s 28 cents on a €10 book.

The disparity between a seemingly buoyant industry and third-world income- streams for those generating the product is deeply puzzling, concerning, appalling, actually.

The Big Five publishing giants – Hachette, HarperCollins, Macmillan, Penguin/Random House and Simon & Schuster – point to the techno revolution, evidencing their struggle with even bigger monoliths such as Amazon as the problem, rather than their own exploitative tendencies. But it is in the nature of corporatism to externalise costs wherever possible. The costs of living as a writer get passed on – writers teach, edit, review, ghost-write, cab-drive, put out in myriad ways so that they may write the books that support the global corporate entity that is modern-day publishing.

A recent row over the relationship of critic to author in Ireland links directly to this New Economy in literature. At its forefront lingers a nostalgia for a more elegant age (which may never have existed). In this world, so the fantasy goes, critics and authors, against a background of clacking typewriters, called “each to each”, and good writing was eventually recognised. Even the hard stuff like Joyce and Beckett – see them getting into print nowadays? Over a lifetime a talent (John Fowles’s for example, whose collected letters to his editor are being auctioned) might be nurtured by the supportive labours of a whole team of skilled and dedicated publishing experts.

Shareholder interests are in sales, period, not style or syntax; publishing houses are the cosmeticised façade of private equity groups.

So the age of the professional writer and critic is obliterated by balance sheets. What remains is a genteel representation of the critical role whereby writers review writers, but it is gradually absorbing the advertising code: do not offend. And why would you? In a shrinking pool where big sharks are sniffing for bestseller blood, where agents act like pilot fish, cleaning the teeth of publishing objectives, setting in play a penumbra of spin that shadows many a nudibranch-like writer/critic as she taps out her 500 words? And after all, she may well have, or want, that agent; the pool is incestuous and co-dependent.

It gets worse. In publishing’s changing dynamic George Packer in the New Yorker acknowledges an overall decline in physical book sales in the US and the complete removal of “gatekeepers”, “who sifted the great ocean of literary content for works of value”. The techno age profit squeeze is even more eviscerating because in the land of the New Economy, marketing is the one-eyed king, and marketing algorithms the attendant critic/lord. As Packer puts it, “exchange-value is prized over use-value”. If writers are under pressure to prove that their books can produce sales, the “gatekeepers” are being eliminated in what Amazon terms “disintermediation”. They are replaced by statistical probability and data analysis as the antennae of human cultural development.

Many writers are turning to self-publishing out of frustration and a “what the hell” realisation that if their work is never going to hit the bookshelves of Foyles or Hodges Figgis, they may as well go the vanity route. They might also quite like to benefit from the “disintermediation” vibe. Amazon’s self-publishing platform offers 70 per cent royalties, which sounds too good to be true. The reality according to Packer is that half of all self-published writers make $500 a year or less, and the digital market is awash with barely-edited books. The advent of print on demand shape-shifts the industry even further, accelerating the commodity morph. The key factor is of course sales. And the siren song of sales is marketing.

Little wonder if writer/critics put themselves to use as handy klaxon service for publishing houses, agents and even their mates – how can you diss a piece of work toiled over for years, likely to earn no more then the cost of “a toast and tea”? Christopher Ricks argues that “literature is, among other things, principled rhetoric.” The problem is that the literary industry is marketing principled.

Walking through Bloomsbury following Ricks’ talk, my friend, the painter Louisa Mahony, and I pondered an emblematic face to conjure the current circumstances. We thought of Marshall McLuhan, whose unified electrical field is prescient, moved to Andy Warhol’s deadpan visage. We finally fixed on artist Jeff Koons as the twinkling-eyed face of the New Economy: “I like it, I like it”, the anti-critic’s jingling ethos in the celebration of banality.

Fiona O’Connor is a former Hennessy Short Story Prizewinner. She lectures at the University of Westminster and is artistic director of St John’s Mill Theatre Company, Beaufort, Co Kerry