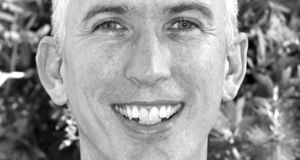 Damen O’Brien: “Sometimes you have to give up on your favourites, but sometimes it is worth ignoring the feedback and sticking with your gut. I am glad I did with this poem.”

A poem that had been rejected by numerous journals and competitions has just won one of the world’s most valuable for a single unpublished poem.

The winner of The Moth Poetry Prize has been announced as part of the Poetry Day Ireland celebrations on Instagram, live from The Moth headquarters in Co. Cavan. The prize, which is solely sponsored by the publishers of The Moth, is now in its tenth year.

Each year a single poet is asked to judge the prize blind, and this year the judge was the esteemed US poet and professor of poetry at Yale University, Claudia Rankine.

Rankine chose Damen O’Brien to receive the €10,000 prize for his poem The Nave. The three other shortlisted poets – Claudia Daventry (UK), Kate Potts (UK) and Nicholas Ruddock (Canada) – each receive €1,000.

“I appreciated this poem’s treatment of landscape and place, a lens that refuses the romantic lull of the pastoral,” Rankine said. “There is a wonderful command of line and imagery that both seduces and disturbs instantaneously. The poem exists in the break that is the passage of time.

“It was such a pleasure and an honour to encounter the myriad voices, forms, risks, themes, critiques, encounters and techniques of these poems, which moved me with their great attention and care.”

“This is amazing, exciting, and extremely surprising!” O’Brien said of winning the prize. “Like most artistic endeavours, poetry is a little bit battered and bruised by the cancellations and social distancing caused by COVID-19 right now, so it is wonderful to get good news.

“The great thing about winning with this poem is that I have actually submitted it to several journals and other competitions without success. Sometimes you have to give up on your favourites, but sometimes it is worth ignoring the feedback and sticking with your gut. I am glad I did with this poem.

“I had become aware of The Moth Poetry Prize over the last few years through friends and fellow poets who had all tried their luck and who spoke most highly of the quality of the shortlist. However, it was only when my compatriot, David Stavanger, was recently shortlisted that I thought I should give it my very best tilt.

“My thanks to Claudia Rankine. And my thanks also to Rebecca O’Connor and Will Govan for doing such a good job organising and administrating this competition, and making The Moth Poetry Prize so well respected.”

O’Brien has always dabbled in writing poetry, but only took it up in earnest six years ago, when he made a new year’s resolution to focus on improving his practice. He won his first poetry competition in 2014. Numerous other prizes followed, and in 2017 he was the joint winner of the Peter Porter Poetry Prize (run by the Australian Book Review). He is working on his first collection.

The current issue of The Moth, featuring all four shortlisted poems, can be purchased at themothmagazine.com.

Eighty-six kilometres past the last

a broken-down hitchhiker; one of those

mad chapels which rise out occasionally from

the junk bush, as if they were shaggy prophets

striking out into the wilderness; one of those

inns of last hope, built by the community

to make a community, and knuckling on

when the community fades into failed farms.

Probably stones. Someone must have really

between anywhere important and somewhere else,

a trudge by foot and three albums by car.

There is such an urge to break things, to

set a hand against the plinth of the Earth,

and push it over, such an urge, to make

unseen corrections to the stolid dependability

of creation. Some say that a devil is in it,

whispering in our ears, or grain by grain

encouraging the avalanche, but I keep thinking

of that story you told me of your weary

colleague who chips at the edge of parenthood

of unresponsive childhood from her daughter,

over her shoulder, reeling in the future.

Sometimes God gives us something broken:

through drought and flood; or little lives,

silent and unblinking in their cots. Like all fatuous

truths, we are told things which are broken

allow us to see such beauty limned and split

from the hale world, like a flash of colour

struck prismatic from the stain of a bloody

crown of thorns; or this rendering of Peter

rent by a vengeful rock pitched through a pane;

half broken apostles range and glint in the apse.

But each unremittent stone in the jagged brow

of the church doesn’t seem to have brightened this

dusty cul-de-sac of nothing on the way from nowhere.

Poor testament to faith and industry. God should do

better with his lesson. I choose a stone, take a throw.