Wealth of emerging talent due to hit the bookshelves in 2015 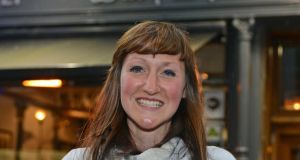 Sara Baume, winner of the Davy Byrnes award this year, will release her debut novel Spill Simmer Falter Wither in 2015

Next year brings plenty of emerging talent to the bookshelves, both in Ireland and internationally.
Four brothers deal with a madman’s prophecy of violence in 1990s Nigeria in Chigozie Obioma’s The Fisherman (One, February). In Emma Hooper’s Etta and Otto and Russell and James (Fig Tree, January) Etta, an octogenarian, goes on a 3,000km journey to see the Canadian sea. Sara Taylor’s The Shore (William Heinemann, March) maps out the secrets of generations of women living off the coast of Chesapeake Bay, in Virginia. Sara Novic’s Girl at War (Little, Brown, May) explores the devastation wreaked by the Serbo-Croatian conflict.
More Saras as we move to Ireland, with the Davy Byrnes 2014 winner, Sara Baume, one to watch for her poetically titled Spill Simmer Falter Wither (Tramp Press, February), which tells of an unlikely friendship between two outcasts in rural Ireland. Weightless (Bloomsbury, March), by Sara Bannan, focuses on cyberbullying with the arrival of a new girl at an Alabama high school. A murder in Lisa McInerney’s The Glorious Heresies (John Murray, April) affects the lives of five misfits in postcrash Ireland.
From Ireland to Illinois, Paula McGrath’s short novel Generations (John Murray, July) delivers interlinked stories of multiple characters as they seek to rebuild their lives after loss.
Set in Victorian England’s theatre district, The Curtain Falls (Ward River, March), by Carole Gurnett, details the secret life of a gay writer. Henrietta McKervey’s What Becomes of Us (Hachette Ireland, April) looks at the role of Cumann na mBan in the 1916 Rising from the perspective of a journalist in 1960s Ireland.
Debut authors are also well represented in the short-story form, with Andrew Fox’s Over Our Heads (Penguin, April) and Thomas Morris’s We Don’t Know What We’re Doing (Faber, August).
The Stinging Fly continues its tradition of publishing new talent with Claire-Louise Bennett’s Pond (April) and Danielle McLaughlin’s highly anticipated collection due later in the year.

Ireland’s love affair with the short story continues to grow, with a host of new anthologies and collections on the way. The Hennessy Book of Irish Fiction 2005-2015, edited by Dermot Bolger and Ciarán Carty (New Island, March) is the third anthology in the series chronicling an emerging literary generation.
The Irish Times contributor Sinéad Gleeson is at the helm of a collection of Irish female writers, among them Éilis Ní Dhuibhne, Anne Enright, Christine Dwyer Hickey and Nuala Ní Chonchúir, due to appear in the spring. New Island also releases the seventh instalment in its Open Door series, featuring novellas by Roddy Doyle, Catherine Dunne, Colette Caddell, Ciara Geraghty and Claudia Carroll.
As Gaeilge, Micheál Ó Conghaile makes a welcome return with Diabhlaíocht Dé (Cló Iar-Chonnacht, May), his first collection in 12 years. A combination of traditional prose, poetry, monologue and music, Alf Maclochlainn’s Past Habitual (Dalkey Archive Press, March) depicts an Ireland struggling with the effects of war.
Edited by Deirdre Madden, All Over Ireland (Faber, May) is a mix of emerging and established Irish writers, including Colm Tóibín, Eoin McNamee and Mary Costello. Under the Rose (Faber, June) is a new collection of previously published stories by Julia O’Faolain, with an afterword from the author looking back on her work.
In keeping with the themes of his novels, the human cost of loneliness and displacement is at the centre of Donal Ryan’s first collection of short stories, A Slanting of the Sun (Doubleday Ireland, September). Collections from international authors to watch out for include Honeydew (John Murray, January), by the American writer Edith Pearlman, and the Impac winner Juan Gabriel Vasquez’s The All Saints’ Day Lovers.